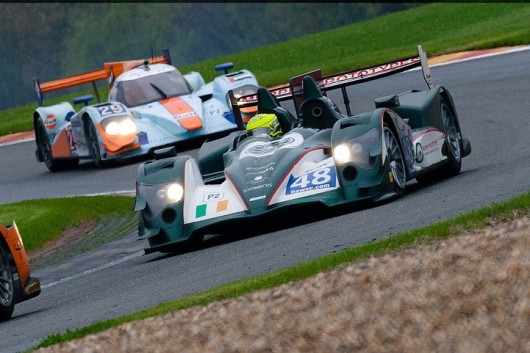 Irish sportscar team Murphy Prototypes was recently announced as one of the sixty two entries that will be competing for a starting place for the Le Mans 24 Hours on Saturday 16 June 2012. The race is organised by the Automobile Club de l’Ouest (ACO) and runs on a circuit containing a mix of closed public roads and specialist motor racing circuit. The race is designed to test both car and drivers’ ability to be quick as well as being able to maintain the performance over a 24 hour period.
The participation of the team must now give a focal point and home for all those Irish sport car racing fans who make the pilgrimage to France each year. In the coming years will a sea of green creep into those famous scenes of celebration underneath the podium?Founded by Dublin-based green energy entrepreneur Greg Murphy, who had no hesitancy in accepting the invitation at all to compete in the race known as the Grand Prix of Endurance and Efficiency.

Commenting, Greg Murphy said “We’re absolutely delighted to be taking part in this year’s Le Mans 24 hours race and it is an honour that we will be there.” “This is only our first season in the European Le Mans but we’ve already shown that we can compete and challenge the best of them and that’s exactly what will be required from us in the Le Mans 24 hour. We’ll have a lot of time over there to test the car and get ourselves fully prepared for the race.” “This will be a new challenge for Murphy Prototype’s Le Mans team but it is one we’re ready for and we are thrilled that we will be competing.”

Murphy Prototype’s driving duties are shared amongst the trio of Jody Firth, Warren Hughes and Brendon Hartley and last Saturday they drove their protoype to third in the FIA Endurance Championship race at SPA-Francorchamps in Beligum. The 6 hours of Spa-Francorchamps served as a rehearsal for the 24 Hours of Le Mans, supplying bucket loads of confidence after the teams excellent podium finish. After qualifying in 11th place, the team fought back through the ranks to take a very encouraging third place.

Commenting, team owner Greg Murphy said: “As this race is the final event before the 24 Hours of Le Mans, to go into that event after a third place finish yesterday is a great achievement. The team worked very hard ahead of this weekend’s racing and we’ve spent a lot of time making sure that the car was just right. Their efforts have certainly paid off. We can go into next month’s 24 Hours of Le Mans in a confident mood.”

The debuting Brendon Hartley said: “After a disappointing qualifying session, I was delighted to mark my racing debut with Murphy Prototype’s with such an impressive result. To make our way through the field like we did shows how impressive the team and the drivers at Murphy Protoype are and that bodes well for this season and beyond.”

Jody Firth said: “It’s great to get back to racing after a bit of a break and our final position shows how hard we worked on getting the car ready for this weekend’s race. We all fought and raced really hard yesterday and we deserved our third place finish.”
Warren Hughes said: “It was tough going but once we were out there we made quick progress through the field and I’m delighted with our finish in third place.

The feeling is that the luck of the Irish is already with the team as they have already made history by becoming the first Irish owned team to compete in the European Le Mans endurance motor racing series when they raced their Nissan LMP2 Oreca 03 in the LMP2 class at Le Castellet, France, the first round of the five race series in 2012.

Murphy Prototypes will use their experience in Renewable, Aerospace and Automotive during this European Le Mans Series campaign. This combined with their resources in bio fuels, hydro energy, energy efficiency, hybrid and alternative vehicle applications will uniquely position the team for marketing and technical partnerships using the platform of Endurance Racing. The team will receive engineering support from Team RLR M-Sport who has been recruited based on their successful, programme in 2011 for the MG Lola Le Man team.