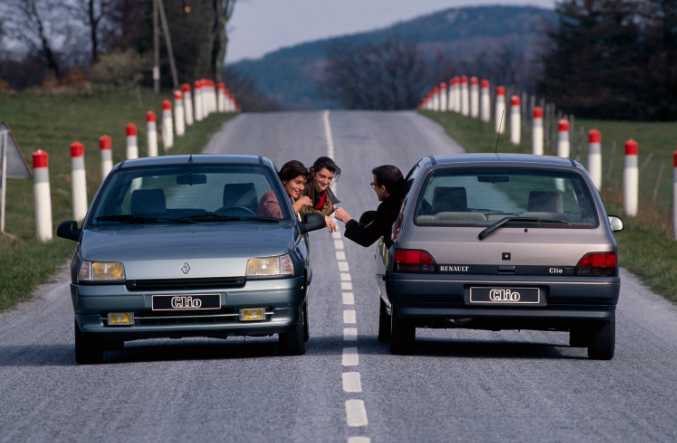 This year marks the 30th anniversary of the iconic Renault Clio supermini, the company’s most successful model and best-selling French car of all time.
The Clio was first shown in 1990 at the Paris Motor Show as the replacement to the successful and popular Renault 5. Light, efficient, spacious and comfortable, the Clio’s arrival marked a pivotal moment for Renault and would go on to become a multiple award-winner spanning five generations. More than 15 million Clios have left production lines around the world over the last 30 years, with more than 55,000 (55,925) making their way to Irish roads and into the hearts of drivers and passengers alike.

The Clio has caught the attention of buyers over the years through a series of emotive, exciting and sensitive advertising campaigns – the iconic Papa and Nicole story for Clio I, Thierry Henry’s ‘Va Va Voom’ campaign for the second-generation car and the most recent advert for Clio V that details the story of the Clio over 30 years on sale, depicting a relationship story with a tone and message that reflects the times. It proved to be an award-winning viral hit that tugged at the heartstrings of the viewing public.

It’s not just Ireland, though – the Clio is the second best-selling car in Europe and has been France’s most popular car for 21 of its years on sale. Over the last 30 years, the Clio has been enhanced with every generation delivering greater comfort, more space, stronger performance, improved efficiency and the latest advanced technology. What’s remained consistent is the Clio’s identity. It provides the kind of refinement and appeal of a larger car but delivered in a small package that represents impressive value. The model line-up has also expanded with each version, with a range of distinct models offering something for everyone. From great-value entry level models and luxurious variants to racers for the road engineered by the experts at Renault Sport and practical estate body styles, there’s been a Clio to suit all tastes throughout the last three decades.

Clio I
Introduced in 1990, the first-generation immediately stood out. Officially presented as a small, versatile car designed and manufactured following the exact same stringent criteria as a ‘big little car’ as it was referred to at its launch at the Paris Motor Show in October of that year. The Clio I was the replacement for the beloved and iconic Renault 5. It ushered in a new naming convention for the brand, replacing numbers with more emotive and memorable names. The move from 5 to Clio also brought with it a significant step change in overall quality and refinement with a noticeable shift upmarket. It was a successful move as the Clio topped the sales rankings in France and achieved eight consecutive years of sales growth until it was replaced by the second-generation version.

It also went on to win European Car of the Year in 1991 where it was recognised for its “remarkable styling, strong quality levels, generous cabin space and unprecedented equipment for a model of this size.” Following its triumphant win, the Clio was an instant success in Ireland, accounting for a quarter of Renault’s sales in 1991, increasing to one in three in 1992. The first full year on sale saw a 1.8-litre 16v RSi hot hatch join the range, with a 1.9-litre diesel joining later in the lifecycle. RT models boasted electric front windows, remote central locking and a stereo radio/cassette – keeping Renault’s promise of offering big car equipment and refinements in a much smaller vehicle. The Clio I was also available as a two-seat van variant.
In 1994, the Clio ‘phase 2’ arrived featuring subtle styling tweaks for a freshened look. A further ‘phase 3’ model came in 1996 with improved safety, design enhancements and mechanical changes to keep it up to date. 1997 was the final production year for the first-generation Clio but also its best sales year – more than doubling its previous best volume to hit 2862 units as the mid-‘90s scrappage scheme drew to a close.

Clio II
The Clio II would have big shoes to fill – the first-generation Clio was a sales hit. Launched in 1998, the Clio II debuted a curvy new look and a small increase in overall length, resulting in a more spacious and accommodating interior with an increase in the comfort thanks to larger seats and suspension engineered for comfort and refinement.

The Clio II was also the subject of a focused weight-saving regime, with the introduction of several advanced engineering solutions to help reduce the weight of the car. An aluminium bonnet featured on some models, while there were polycarbonate headlamp covers and composite front wings also available.
Safety was key to the Clio II’s appeal, with a suite of features available for the first time. ABS was fitted on 50 per cent of the Clio range or could be specified as an option, and front side airbags were available too. Both were firsts in the supermini segment. Up to four airbags in total could be specified, as could seatbelt pretensioners, while fingertip control for the stereo and power steering upped the convenience stakes.

At launch, the engine line-up was similar to the Clio I, with 1.2, 1.4 and 1.6-litre petrols and a 1.9-litre diesel. In 2000, a 16V 1.6-litre petrol was introduced, and the rest of the line-up was upgraded to 16V engines for enhanced performance and economy. 2000 also saw the launch of the legendary hot hatch, the Clio Renault Sport 172, while the breathtaking, mid-engined 3.0-litre V6 model joined the line-up a year later.

The Clio II received its first set of minor updates in 2000, including a revised instrument cluster and standard passenger airbag. This contributed to a class-leading four-star Euro NCAP crash safety rating. 2000 also marked Clio’s best-ever year of sales in Ireland. A booming economy and the thrill of the “turn of the millennium” 00 registration numbers drove a booming car market and the Clio cashed in, hitting 5005 registrations. The Clio II ‘phase 2’ debuted in 2001 with changes to the front and rear styling for a sharper look and upgraded interior quality. Alongside the more angular front end and revised bumpers, the ‘phase 2’ Clio debuted further luxuries like digital climate control, xenon headlights and satellite navigation on the options list. By 2004 the Clio II benefitted from another update, with minor styling tweaks and specification changes to the interior. The Clio Renault Sport became the 182 thanks to an increase in power, while a choice of chassis options was available for the first time – standard and Cup.

Clio III
Unveiled at the 2005 Frankfurt Motor Show, the Clio III represented a significant change over its hugely successful predecessor – a car that carried on life in various forms, living on in Ireland for a few years as the Clio Campus. The new third-generation car brought in some big changes for the Clio name. Interior quality stepped up once again, with more finesse, more space and more equipment.

Familiar Expression, Dynamique and Monaco trim levels were the core models available to customers, with a host of unique special edition derivatives joining the range throughout the car’s life cycle, including the trendy Rip Curl and a TomTom Special Edition, featuring an advanced GPS system. For the first time, the Clio was available with Renault’s handsfree key card and starter button, and cruise control with speed limiter. The Renault Sport version of the Clio III boasted 197hp and was made available in a variety of forms, with a dedicated Cup chassis and specification for enthusiasts, or Lux models for added everyday refinement.

The Clio III was the first car in the supermini category to be awarded a five-star Euro NCAP crash safety rating, scoring top marks in active and passive safety. It was available with up to eight airbags throughout. A practical Estate version was also available for the first time, boasting a versatile load area and generous interior space making full use of the Clio III’s longer wheelbase and larger footprint. In 2006 – its first full year of sales – the Clio III was awarded the European Car of the Year award, making it the first time a vehicle had ever been awarded the prestigious title twice.

Clio IV
The fourth-generation Clio made its debut in 2012 featuring a striking new design by Laurens van den Acker, inspired by the stunning DeZir concept car – a model that previewed Renault’s future design direction with a more emotive look. The Clio IV introduced a range of new technologies, including Renault’s MediaNav and R-LINK media systems which truly democratised satellite navigation – 88% of Clio IV sales in Ireland featured navigation as standard. The theme of customisation was also key with a total of four different interior design schemes available alongside a broad choice of exterior design components to giving owners more choice than ever – a theme which has continued to later vehicles in the form of exterior and interior colour packs.

The Clio IV was powered by a range of petrol and dCi diesel engines all majoring on economy, while the first automatic Clio R.S. was introduced with paddle shifters and a powerful turbocharged petrol engine. The Clio IV was enhanced over time with the addition of a range of new technologies, including handsfree parking and full LED front lighting. The appeal of Clio IV’s desirable exterior style is evident in the Clio V – a subtle yet sophisticated evolution of its predecessor’s concept car style.

Clio V
Ahead of its 30th year, Renault introduced the All-New Clio – its most advanced, premium and accomplished Clio ever. As with all new versions of Clio, the fifth-generation model represents a remarkable advance in its capabilities while retaining the characteristics that have ensured its enduring popularity with each generation. For Clio V, the exterior evolved from the previous generation, while the interior design and quality received a revolutionary change, featuring more technology and innovative features than ever.

The All-New Clio boasts technology and features found on larger and more expensive models in the Renault line-up, bringing the very best of the brand to a wider range of buyers, with advanced driver assistance systems and full LED lighting as standard equipment across the range, the very latest infotainment systems and the most accomplished driving experience, backed up by a five-star Euro NCAP crash safety rating. Clio hallmarks of high standards of comfort and interior space are found in the All-New Clio, with the largest boot in its class at 391 litres, a spacious interior compartment and supremely comfortable seats.

The revolutionary interior has delivered exceptional progress, not only for Renault, but across the entire supermini class, offering a 9.3-inch touchscreen infotainment system and up to 10-inch TFT Driver Information Display, wrapped up in a high-quality design engineered to be as refined, ergonomic and engaging for the driver and passengers as possible. With a line-up culminating in sporty R.S. Line models, the All-New Clio boasts a more expansive range of engine options than ever before, with efficient TCe and dCi powertrains bolstered by the advanced new E-TECH hybrid powertrain. 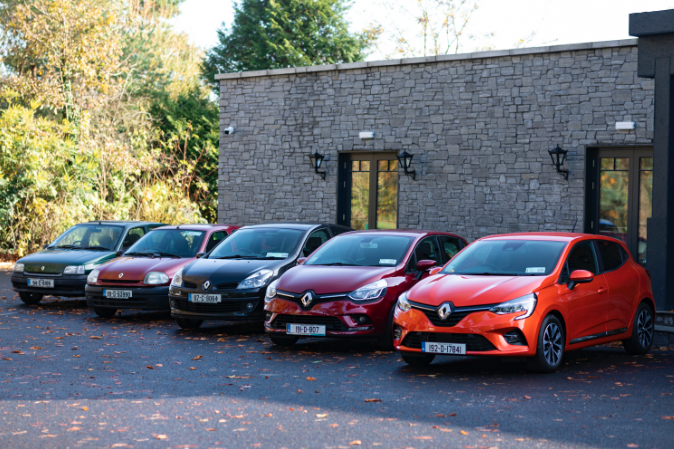