Home Latest News BMW Riders to Ride Around The World 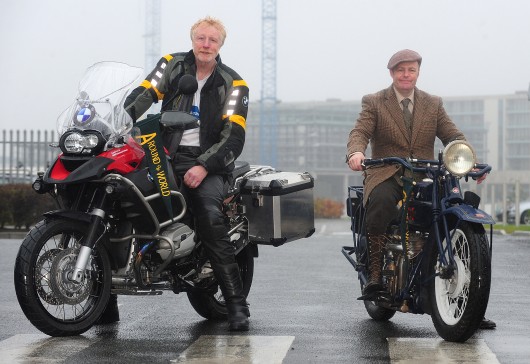 Two BMW-riding adventurers from Northern Ireland have set off from Dublin on the first leg of an 18,000 mile round-the-world expedition. Author Geoff Hill and former road racer Gary Walker are going to recreate the first ever round-the-world motorcycle ride, which took place 100 years ago by Carl Stearns Clancy in 1912-1913. Clancy and his travelling companion Walter Storey departed from Dublin on a brand-new pair of Henderson motorcycles, wearing just a tweed three-piece suit and a cloth cap.

Today Geoff and Gary will be riding new BMW R 1200 GS Adventure motorcycles, equipped with a 110hp engine and feature innovative technology including ABS and electronically-adjustable suspension. In comparison to Clancy’s tweed suit Geoff and Gary will be kitted out in BMW’s Rallye 3 suit which is waterproof and is armoured to the highest standards and features the latest in climate-beating textile innovations. They will also wear System 6 helmets offering maximum protection.

Commenting on the trip, Geoff Hill, 56, said: “Today we are setting off on a very momentous occasion, marking exactly one century to the day that the very first motorcyclists set off to ride around the world. The R 1200 GS Adventures that BMW Motorrad have supplied are hands down the best choice for a round-the-world tour. They are such a contrast to the incredible hundred year old Henderson motorcycle which we have here today. “To think that Mr Clancy set off on a cold, wet day like today is rather humbling. Gary and I are very lucky to be able to follow in his footsteps and, indeed, with his very own boots. We like to think that he’d approve of our adventure.”

Gary Walker, 50, said: “I’ve been riding a very long time, and I’ve been a road racer for many years, but this is without a doubt the biggest two-wheeled adventure of my life. While Geoff is sat on a GS Adventure for today’s preview and wrapped up warm in a BMW Rallye 3 suit, I’m riding this century-old Henderson wearing tweed and a flat cap. And for good reason; this is the same clothing that Carl Clancy wore on the same motorcycle one hundred years ago, and the difference is mind boggling. Modern motorcycles and clothing have advanced almost beyond recognition and that is what makes this trip so special. What better way to honour the man who has quietly inspired so many round-the-world trips than to recreate his?”

Further information on BMW’s range of motorcycles can be found by visiting www.bmw-motorrad.ie