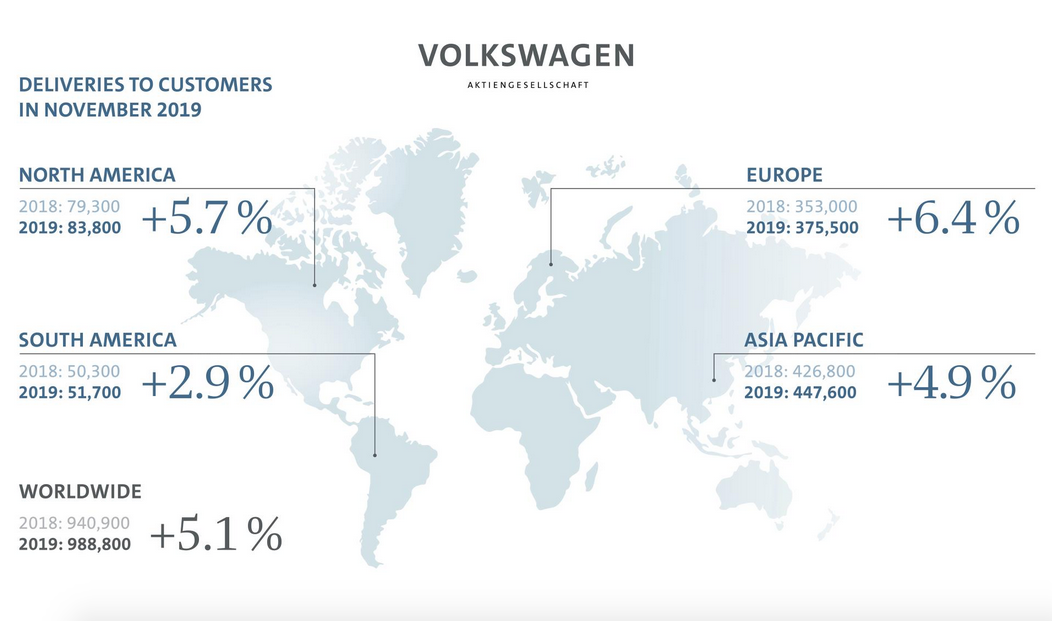 In November, the Volkswagen Group delivered 988,800 vehicles to customers throughout the world, corresponding to a rise of 5.1 percent compared with November 2018. The Group therefore once again grew its market share in all key regions, in some cases considerably. The regions concerned included China, the Group’s largest single market. The Group boosted deliveries there by 5.1 percent despite shrinkage in the overall market. Significant growth was also recorded in Europe (+6.4 percent) and Germany (+9.1 percent). These rises were markedly higher than the moderate falls as a result of WLTP in November 2018. The Volkswagen Group also succeeded in expanding its market shares in the regions of North and South America. Dr. Christian Dahlheim, Head of Volkswagen Group Sales: “In November, the brands of the Volkswagen Group once again showed strong delivery performance. For the period from January to November, we exceeded the prior-year level for the first time this year, despite considerable adverse effects from the markets. We are confident that we will bring 2019 to a successful close.”

In detail, deliveries in the regions in November developed as follows:

In the North America region, the Group also recorded growth and extended its market share. 83,800 vehicles were handed over to customers, a marked rise of 5.7 percent compared with November 2018. In the USA, 56,800 vehicles were delivered, corresponding to significant growth of 13.7 percent. In Canada, deliveries amounted to 9,700 vehicles, a fall of 2.9 percent. In a shrinking overall market in Mexico, deliveries fell by 10.5 percent to 17,300 vehicles.

In South America, the Group succeeded in boosting deliveries despite a fall in the overall market and therefore significantly expanded its market share. Customers took delivery of a total of 51,700 vehicles, 2.9 percent more than in November 2018. In Brazil, the group grew deliveries by 9.2 percent to 41,700 vehicles. In Argentina, the overall economic situation remained challenging. The Group was also affected by this trend and recorded a fall in deliveries of 22.6 percent to 4,500 vehicles, which still represented a significant increase in the market share.

In the Asia-Pacific region, the Volkswagen Group also grew deliveries despite declines in overall markets. 447,600 vehicles were delivered, representing a rise of 4.9 percent compared with November 2018. This positive development was driven by China, the Group’s largest single market. In a shrinking overall market, deliveries once again grew markedly by 5.1 percent to 419,700 vehicles, leading to a significant rise in the Group’s market share.