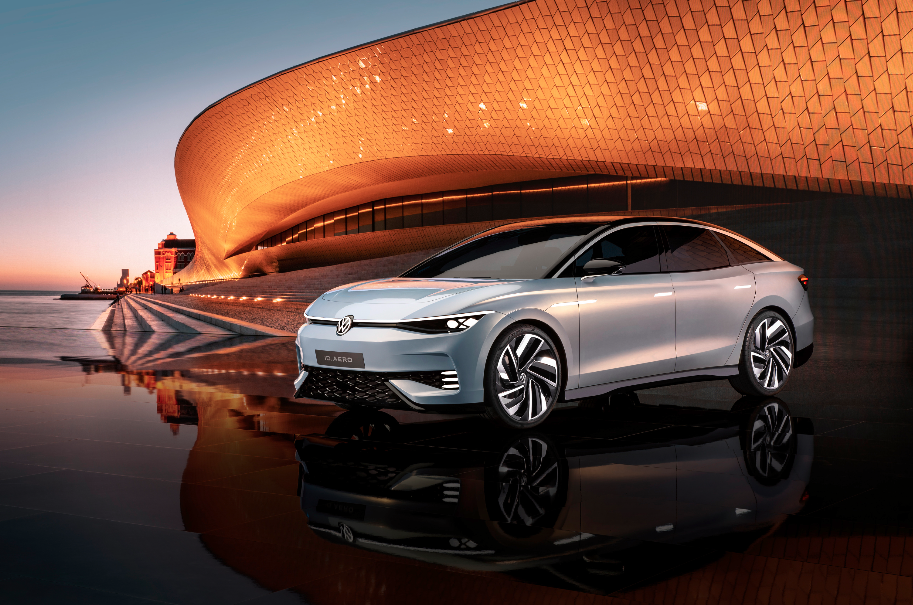 The world premiere of the VW ID. AERO concept car in China took place yesterday and Volkswagen has given us a foretaste of the brand’s first global fully-electric sedan. The future model will be positioned in the premium mid-size sedan segment. Its progressive, stylish and aerodynamic design allows the vehicle to impress with generous space in the interior. The production version for China is expected to go on sale in the second half of 2023. Volkswagen is also planning to start production of a European series version in Emden in 2023.

The concept vehicle is almost five metres long and was designed based on aerodynamic principles. The roof slopes elegantly to the rear in coupé style and contributes to achieving an excellent drag coefficient of 0.23. VW’s modular electric drive matrix (MEB) additionally permits short overhangs, a long wheelbase and an exceptionally spacious vehicle interior. The ID. AERO is equipped with a powerful lithium-ion battery with a net energy content of 77 kWh. Thanks to the interaction of the efficient drive system and the excellent aerodynamic properties, the ID. AERO achieves ranges of up to 620 kilometres (WLTP), making it suitable for long distances.

With the close-to-production ID. AERO concept car, Volkswagen is stepping up its electric offensive in China as part of its ACCELERATE strategy. Following the ID.33, ID.43 and ID.63, the production version of the ID. AERO will already be the fourth fully-electric model series in China, with expected availability in the second half of 2023. Two versions are planned there – one for each Volkswagen joint venture. Based on its regional strategy, Volkswagen is aiming to become the leading supplier of sustainable vehicles in China. As early as 2030, it is planned that at least every second vehicle sold in China will be an electric vehicle. Volkswagen is driving forward its electric offensive worldwide on the Way to ZERO. As the new flagship model of the ID. family, the ID. AERO will therefore be offered globally in future – also in Europe and North America in addition to China.