Every child growing up has the dream of driving around in the big monster truck as it crushes the cars beneath and crosses over terrain rougher than the surface of the moon. While the new Volkswagen Amarok is not a monster truck it gives you the impression that you’re the biggest car on the road, until of course you pull up alongside a rock truck, then you’re tiny again! 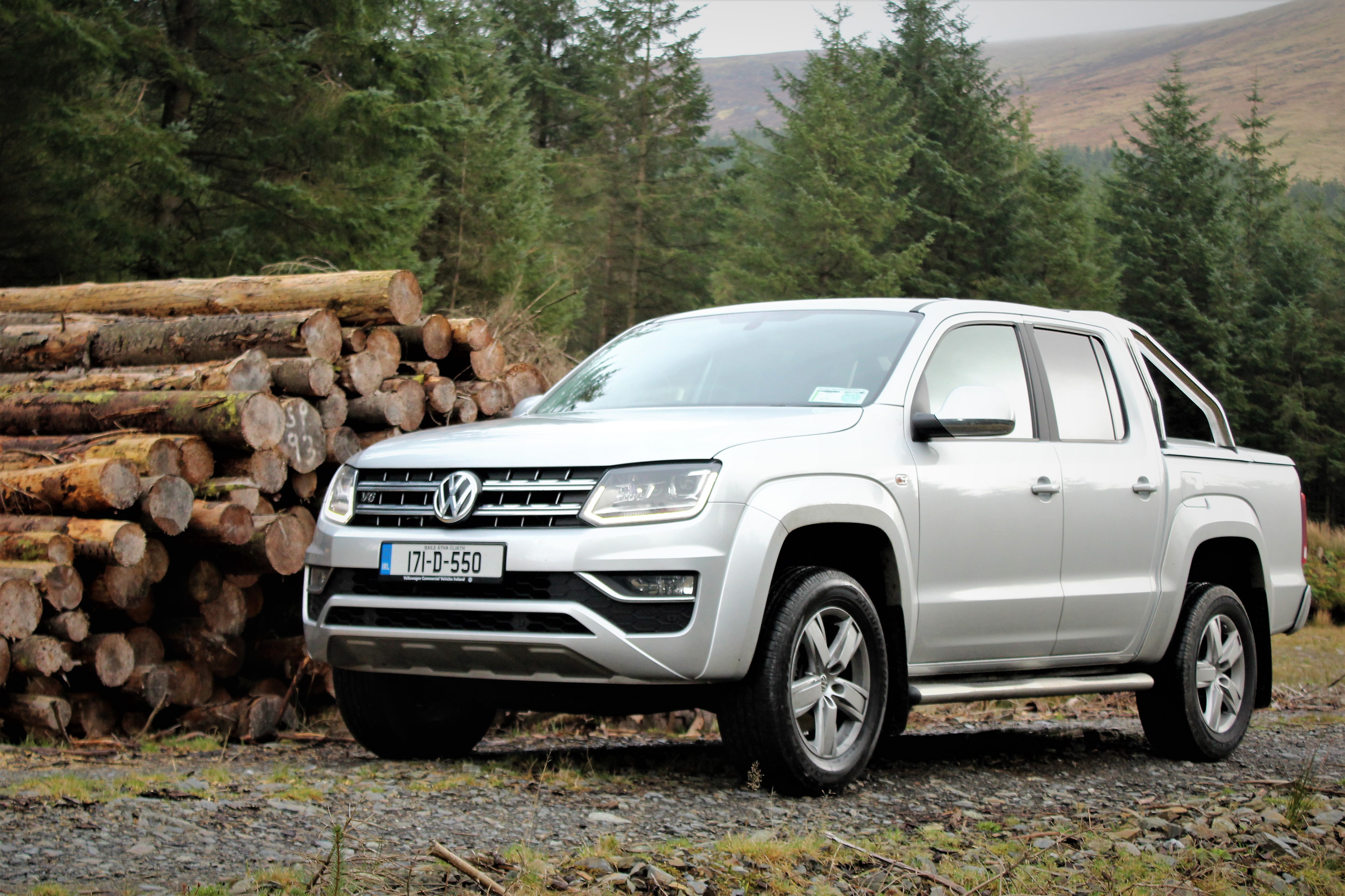 The newest version of the VW Amarok was launched to the masses at the National Ploughing Championships 2016 where Volkswagen Commercials gave attendees the opportunity to see just how capable the Amarok V6 is as they put it through its paces on a purpose built off road track. The new VW Amarok has received a discreet facelift with a new front bumper and grille and revised interior layout but the big talking point is the new power-plant. The Amarok is now available with a 3.0 litre turbo diesel V6 engine with 224hp and a towing capacity of 3.5 tonnes. This my friends makes for a very fun pickup to drive! 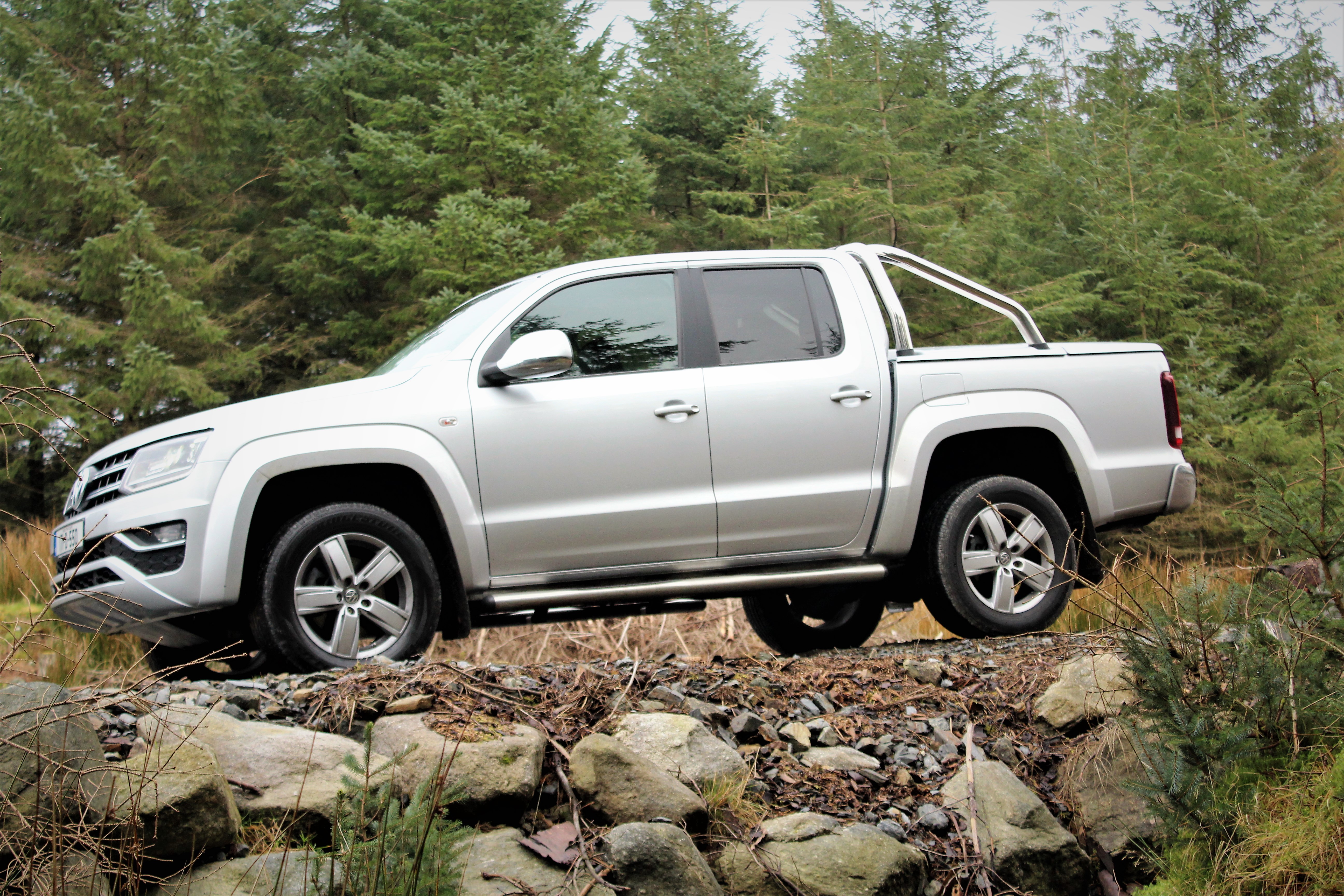 From the outside I would class the Amarok as the best looking amongst its competition such as the Nissan Navara, Ford Ranger and Toyota Hilux. The Amarok may come up against some competition when the new Mercedes X-Class arrives but until then it will hold its own. Whilst having the normal rugged looks of an off-roader it maintains a touch of class about it also which others seem to lack. Don’t get me wrong, if you are in the market for a true workhorse having a touch of class may not be on your list of pro’s and con’s but it can’t do it any harm that’s for sure. The new Volkswagen Amarok is available in three trim levels; Trendline, Comfortline and Highline with three varying power outputs of the V6 engine from 163hp, 204hp and the range topping 224hp. 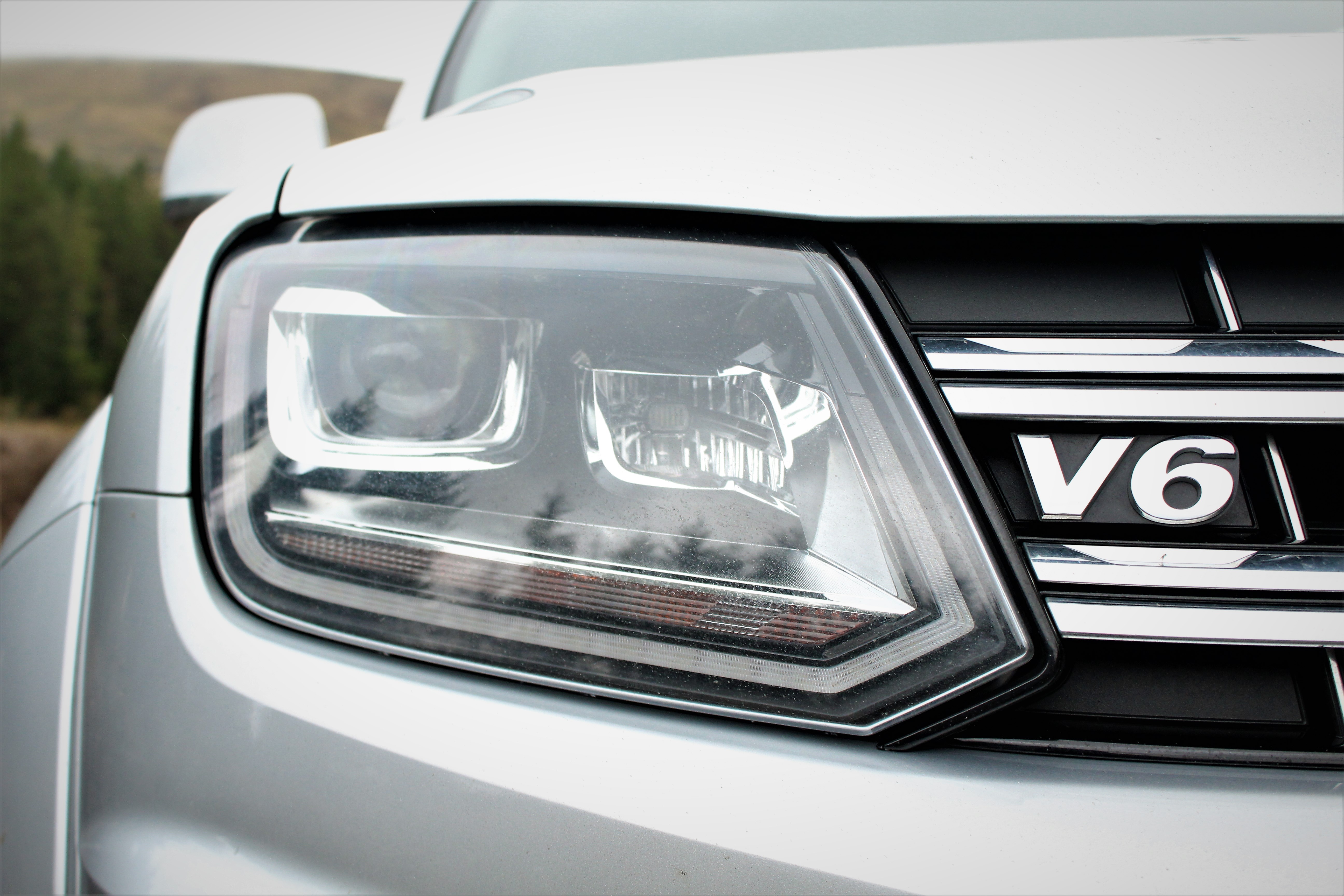 Sitting into the new Amarok V6 you are greeted by a simplistic cabin where everything has its function and nothing is there just for the sake of it. Space is plentiful in both the front and rear seats and there is ample storage space also. A 6.33-inch screen takes its position in the centre of the dash which allows access to all the infotainment and driving information as well as Bluetooth and Apple CarPlay. There are also 4 12 Volt electrical sockets throughout the cabin. The flatbed at the rear of the VW Amarok has a payload of 928 kg whilst it can comfortably fit a Euro pallet between the two rear wheel arches. There are also several options available for covering the rear load area. 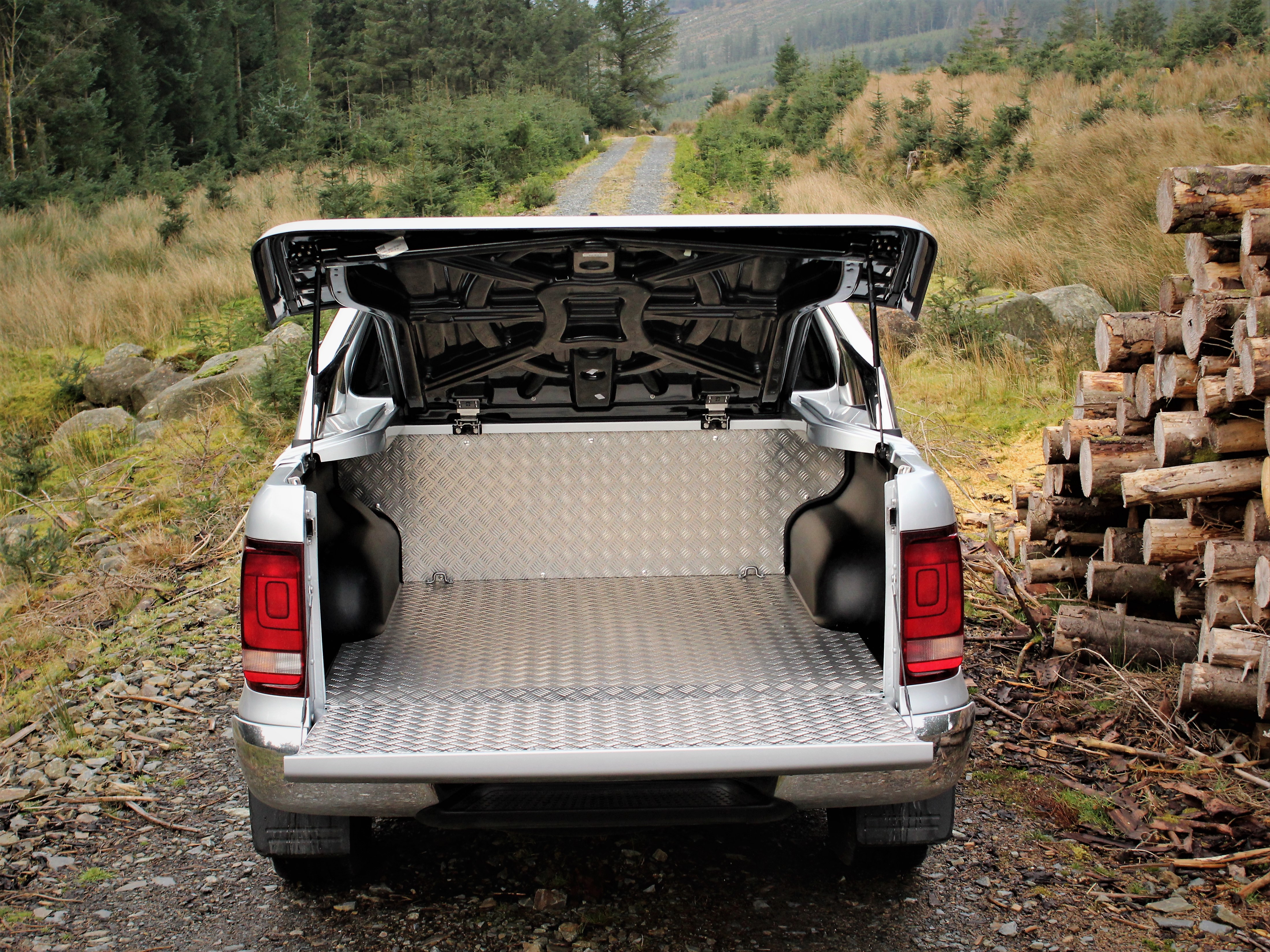 So, down to the business end of the new VW Amarok. It is now powered by a 3.0 V6 turbo diesel engine paired with a DSG automatic transmission with Volkswagen’s clever 4Motion system. With this system, there is also an off-road mode and an electronic differential lock to help to find traction should you find yourself in that situation. Thanks to some generous clearance angles at both the front and the rear you can tackle even the most severe of inclines or declines. The steering is light and direct meaning that negotiating tight corners and streets was simple enough. The biggest problem with bringing something as big as the Amarok into any city or town is trying to find parking. This was made easier on the test model as it was fitted with front and rear parking sensors as well as a cleverly placed rear reversing camera which just never seemed to get dirty or wet! 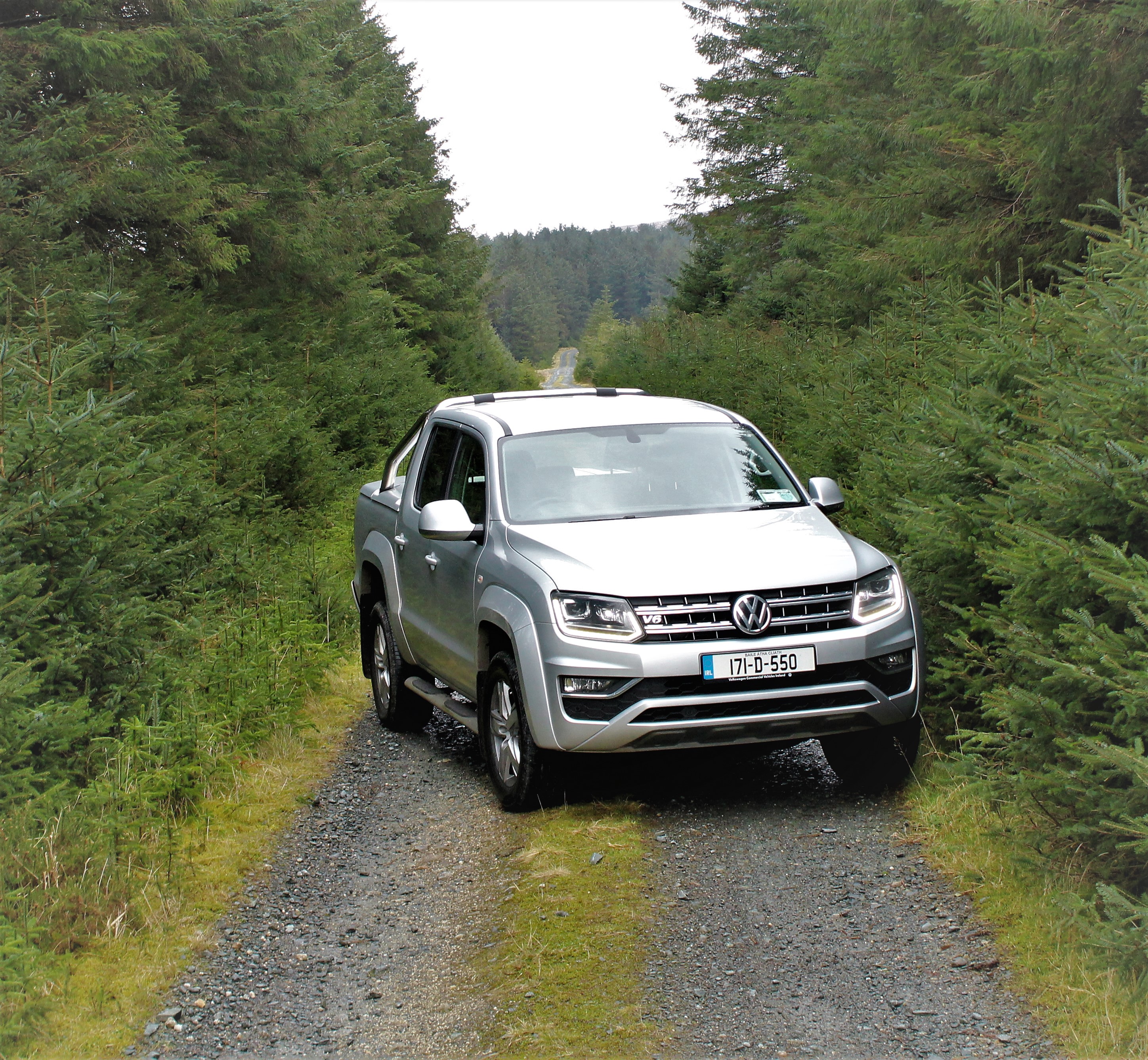 When put to the test of some proper off-roading in the depths of the Wicklow Mountains the Volkswagen Amarok V6 was perfectly capable and at no time did it ever even seem like it might be leaving me stuck there. I managed to put it through some terrible terrain and at times I couldn’t even step out to see how deep it was for fear I’d be minus a shoe or two getting back in but the Amarok just kept on chugging away and never even broke a sweat. 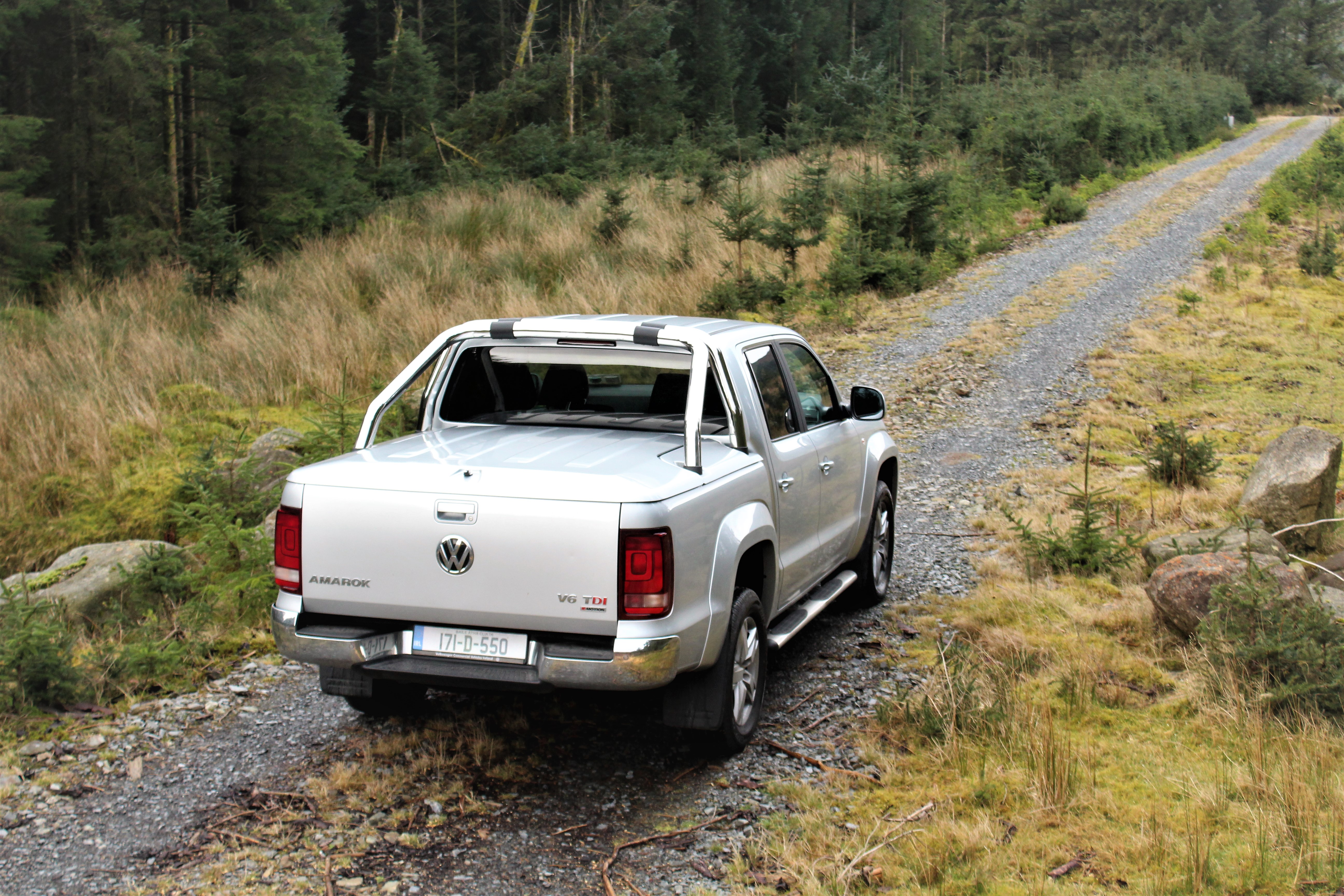 On the open road, the 8-speed DSG transmission makes light work of flicking through the gears as the accelerator pushes down. It’s rare that some other car might leaving you sitting in their dust at the lights. Road noise is kept to a minimum. The only intrusion which I did notice appeared to be from the roll bar fitted to my test model. While the Amarok feels at home when it is up to its chassis legs in mud, it is as comfortable on the open motorways and you could be forgiven if you forgot for a few moments that it is in fact a pickup and not a more streamlined SUV or large family saloon. 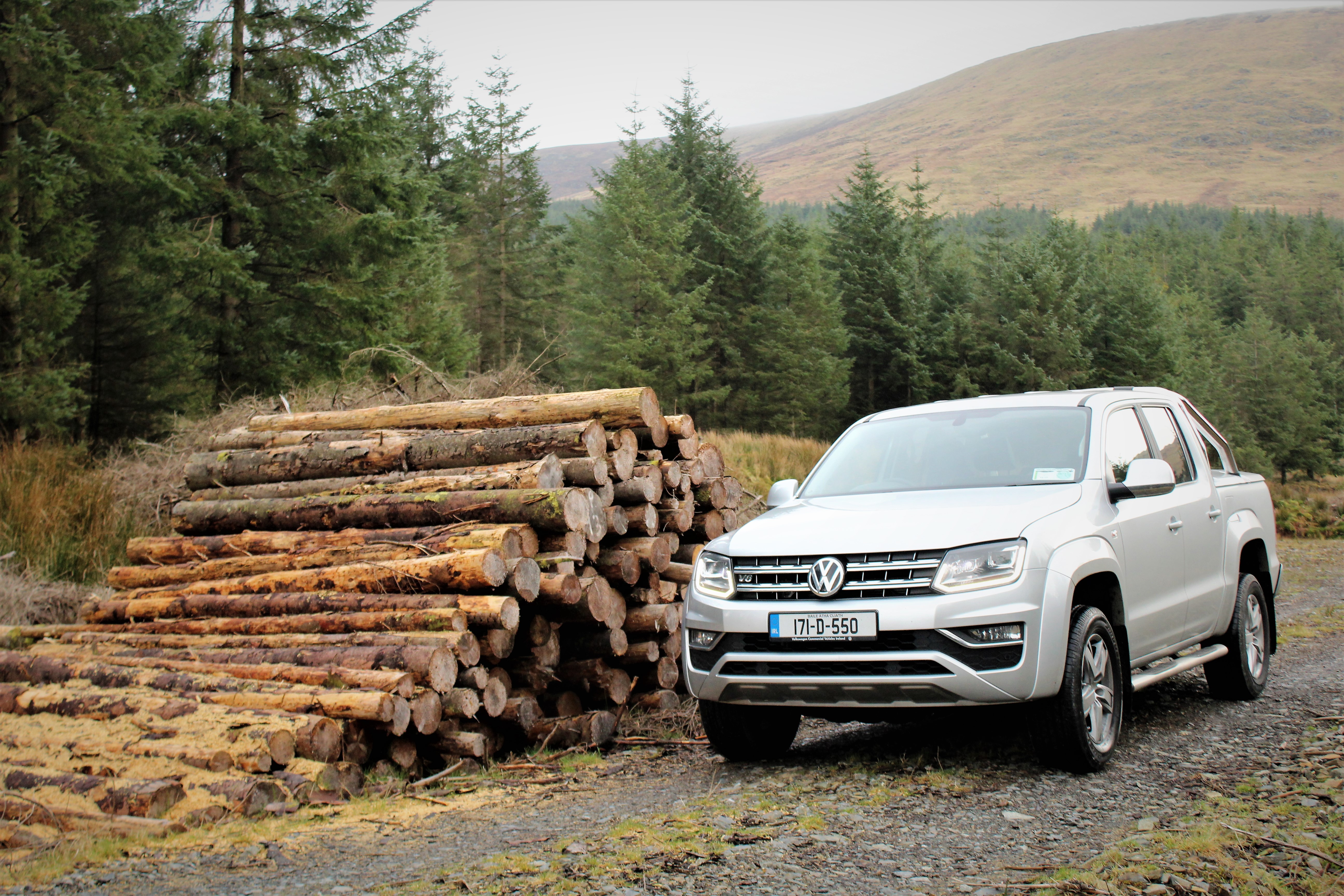 The previous model of the Amarok was perfectly capable and as appealing to look at. What Volkswagen Commercials have done is refined some of the exterior and interior features which needed to be addressed and also added what every customer wanted, more power!