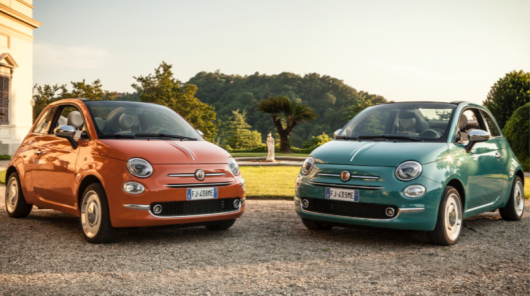 To celebrate the 60th birthday of the iconic Fiat 500 a new special series, the Fiat 500 Anniversario, will be available to order from today. The history of Fiat 500 has been punctuated by many special editions, launched throughout its life to underline its distinctive ability to combine exclusivity with mass appeal, while remaining very much true to itself. The design of the Fiat 500 has fired the imagination of artists and fashion designers, to create examples such as the “500C by Gucci”, the “500 by Diesel” and the recent 500 Riva, “The Smallest Yacht in the world”.

The Fiat 500 Anniversario is available as a hatchback or a convertible and honours the 1957 Italian-made icon with a contemporary re-interpretation of the stylistic features that made it famous in the Dolce Vita years. This new special series has a sixties look that references some of the key historic characteristics of the car, such as the two new exclusive colours, Sicilia Orange and Riviera Green, the chrome accents on the bonnet and door mirror caps, the vintage Fiat logos and the 16-inch vintage alloy wheels. An alternative 16-inch diamond finish alloy wheel is also available, as a no cost option, offering a modern take on the spokes of classic car wheels. The vintage elegance of the car is completed by the cursive “Anniversario” logo sported on the boot. 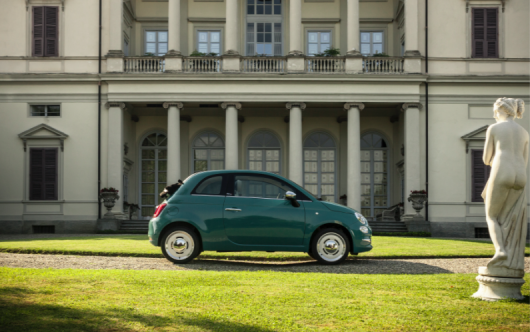 The Fiat 500 has always had an inimitable look, and with the Anniversario every detail is designed to capture the carefree style and mood of the sixties, but with a modern touch. Inside, the new seats channel the retro style with horizontal striped fabric, contrast piping in body colour and an embroidered 500 logo, while the body-coloured dashboard and “Anniversario” embroidered floor mats complete the look. The sixties was synonymous with embracing new technology and the new Fiat 500 Anniversario does just that. With air conditioning, cruise control and rear parking sensors as standard, customers can also specify the optional Tech Pack at a cost of just €600, which includes the 7-inch TFT instrument panel, the Uconnect 7-inch HD LIVE radio, Apple Car Play and Android AutoTM, bringing the Fiat 500 Anniversario bang up-to-date.