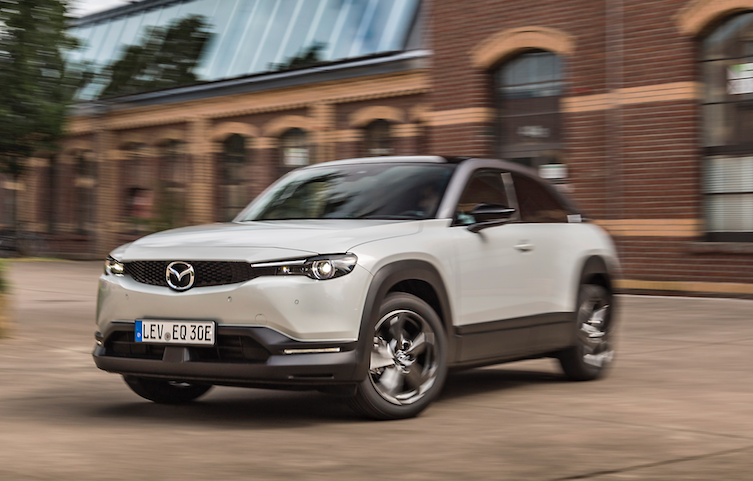 Arriving in the early in 2021, the Mazda MX-30 is Mazda’s first all-electric production vehicle and part of an electrification strategy that has already seen Mazda M Hybrid mild hybrid systems fitted as standard to the Mazda3 and Mazda CX-30, plus selected Mazda2s. A stylish and versatile crossover, the Mazda MX-30 features an AC synchronous electric motor and a 35.5kWh lithium-ion battery that delivers a range of approximately 124miles. It comes with AC charging up to 6.6Kw and DC rapid charging designed to meet 125A Combo Charging standards. Alongside the development of efficient combustion engine technology such as the Spark Controlled Compression Ignition Skyactiv-X petrol engine, the fully-electric MX-30 is part of Mazda’s philosophy of the right power source in the right place at the right time, formed from the company’s ‘well-to-wheel’ approach to emissions measurement.

Equally, like every Mazda, the MX-30 has been conceived with the goal of ‘Jinba Ittai’ at the forefront of the development process. A Japanese phrase for horse and rider as one, the spirit of Jinba Ittai can be found in every Mazda where the connection between driver and car is a key element in what makes a Mazda a Mazda. No car exemplifies this more than the Mazda MX-5 and its focus on driver engagement, lightweight design, communicative controls and balanced handling. Sharing the MX moniker – that’s only worn by Mazdas that challenge convention to create and deliver new values in a segment – the Mazda MX-30 has been designed with the aim of delivering the kind of driver engagement not traditionally found behind the wheel of a battery electric vehicle.

Infusing an EV with this typical Mazda feel of a car that reacts to the driver’s intentions instantaneously, providing greater confidence and enhanced driver enjoyment was key to the MX-30’s development. When applied to an electric vehicle, the ongoing quest for the ultimate Jinba Ittai driving experience starts from the ground up with a choice of a battery size that’s perfectly considered for the often opposing demands of whole life CO2 consideration, performance, range, charging times and weight.

Combining Mazda’s next-generation Skyactiv-Vehicle Architecture with a 35.5kWh lithium-ion battery the Mazda MX-30 avoids the excessively high kerbweight of many EVs. Mazda’s next-generation Skyactiv-Body architecture is enhanced in the MX-30 through an increase in rigidity and energy transmission efficiency. Incorporating the battery pack as a part of the bodyshell’s ring structure greatly increases diagonal rigidity. Specifically, the frame that surrounds the battery pack is connected to the body in 20 locations. Straight crossmembers sandwiching the battery pack from above and below combine with a reinforced ring structure for the rear axle mounts to significantly reduce the delay in the transmission of inputs. The MX-30’s suspension features a MacPherson strut front and torsion beam rear set-up. By implementing the same measures as on the new Mazda3 and CX-30 – such as the use of optimised bushings and a centre beam – the smooth and instantaneous transmission of force from the road surface to the driver has been achieved.

In addition to chassis and suspension developments, Mazda’s G-vectoring control (GVC) system was evolved to fully exploit the unique characteristics and qualities of an electric vehicle. Equipped with e-GVC Plus, the MX-30 uses the torque characteristics of the electric motor to optimise the front-rear load shift during a wider range of driving scenarios. In every speed range, the system achieves smooth and seamless transitions between longitudinal and latitudinal G-forces, whether the driver is making steering corrections on a straight road or cornering, to create vehicular behaviour that always feels natural and pleasing. e-GVC Plus also provides fine control over motor torque in response to the driver’s steering wheel operations. When the driver turns the steering wheel to enter a corner, the system reduces torque slightly to instigate load transfer to the front, assume a smooth turning posture, and optimise front tyre grip. When the driver starts to return the steering wheel to its original position as the car begins to exit the corner, torque is increased slightly to shift the load to the rear and stabilise vehicle behaviour. If the driver quickly returns the steering wheel to the neutral position, brake moment control operates in co-operation to settle cornering behaviour. As a result, it greatly improves stability when driving on twisty roads or low grip surfaces.

Mazda has also developed its own bespoke motor pedal concept for the Mazda MX-30 – a development of the traditional accelerator pedal. The e-Skyactiv system’s motor pedal uses Mazda’s own electric motor torque control system to accurately and smoothly deliver the driver’s intended amount of both acceleration and deceleration. Closely monitoring the movement as well as the speed of the driver’s pedal action enables the motor pedal to deliver linear and natural acceleration without uncomfortable G-force or yaw. Gradual torque transition makes it easy to maintain vehicle speed when the driver operates the pedal slowly. In contrast, it interprets quick pedal operation as an indication that the driver wishes to accelerate and responds quickly by providing powerful acceleration. Similarly, when lifting the foot from the pedal, the system monitors the speed with which the driver operates the pedal and controls the response of deceleration G-force accordingly.

In addition, Mazda’s engineers and test drivers have worked to ensure natural and smooth transition from acceleration to deceleration, seamlessly connecting deceleration force as the driver moves his or her foot from the motor pedal and starts to press the brake to ensure greater management of the front to rear load shift when braking for a corner or stopping. Even better, to offer more driver engagement and control, the MX-30’s steering wheel-mounted paddle shifters allow you to adjust the powertrain’s torque characteristics and the level of energy regeneration when coasting or under braking. These characteristics can be adjusted through five selectable settings with the paddle shifters -two levels up and two down from the default ‘D’ setting.

As an example, when driving downhill, using the left paddle will result in an increase in vehicle running resistance and more energy recuperation, enabling the driver to control the vehicle with added confidence and recoup energy. Alternatively, using the right paddle when driving up steep inclines will give the feeling of a decrease in running resistance, making it easier for the driver to maintain speed when lifting from the accelerator on an incline.

To further ensure the Mazda MX-30 delivers the sort of driver engagement traditionally missing from electric vehicles, the brakes have been developed to deliver a natural and progressive feel. Braking force builds progressively in respond to increased pressure and drops off smoothly when pressures is taken away from the pedal. This ability to feel and modulate braking, crucially removes the grabby and dead feel of some EV vehicles braking systems. The Mazda MX-30’s braking system reduces rolling resistance while increasing control, enabling drivers to maintain balance for a comfortable driving experience.

Across chassis, suspension, steering, powertrain and braking the MX-30’s set up and technology combines to offer drivers a composed ride quality, seamless handling and an intuitive feeling of total control over the car via communicative controls, as if the car is an extension of driver’s body – the essence of Mazda’s Jinba Ittai driving experience. A car that’s 100 per cent electric but also 100 per cent Mazda, the MX-30 delivers the unique performance and refinement of an electric vehicle with the natural driver connection and enjoyment you’d expect of a combustion engine powered Mazda.

With pricing for the full Mazda MX-30 range to be announced later in the year, the Mazda MX-30 First Edition will go on sale early in 2021 and offer a stylish and driver focused Mazda BEV. Available with a choice of free-of-charge Ceramic Metallic or Polymetal Grey Metallic single colours, the First Edition can also be ordered with either three-tone Ceramic Metallic or three-tone Soul Red Crystal Metallic. 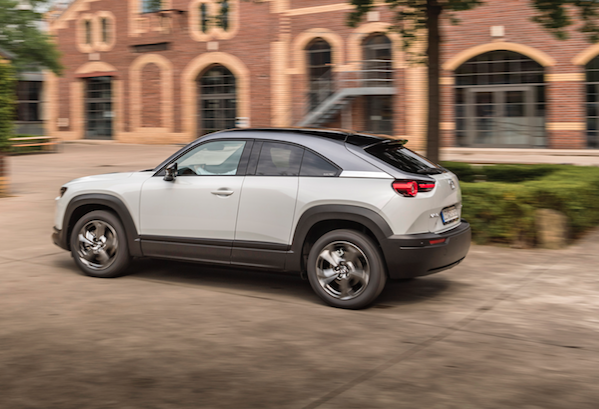