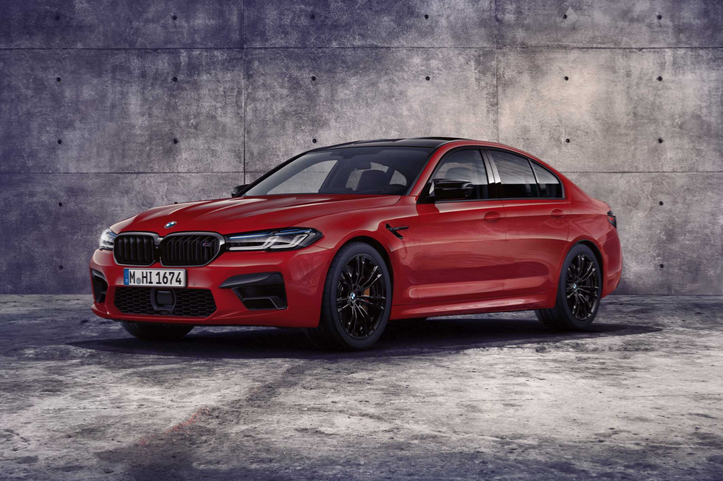 Here it is, the one we have all been waiting for. Today marks the arrival of the new BMW M5 Competition which will see the high-performance saloon from BMW return to the road in its sharpest and most performance-focused form to date. Fusing a high-revving, 625hp 4.4-litre V8 turbocharged engine with a finely-tuned chassis that incorporates new dampers, the BMW M5 Competition delivers the everyday usability and comfort of an executive saloon twinned with driving pleasure and exceptional on-track ability. The high-revving, eight-cylinder unit develops 625hp at 6,000rpm. Peak torque of 750Nm is on tap between 1,800 and 5,860rpm. The characteristics of the V8 can be altered at the touch of a button from the EFFICIENT mode to SPORT and SPORT+, the latter two further enhancing the engine’s response to the drivers input from the accelerator. The BMW M5 Competition sprints from 0-62mph in 3.3 seconds, with 0-124mph achieved in 10.8 seconds.

The eight-speed M Steptronic transmission enables short shift times and fast, precise responses to every nudge of the accelerator. The Drivelogic switch on the gear selector allows three modes for efficient, sporty or dynamically intense track driving with rapid gearshifts. The driver can use both the selector lever and the shift paddles on the steering wheel to take control of gear changes manually. In manual mode, they can also execute multiple downshifts to the lowest available gear, for instance when braking into tight corners. Additionally, there are no automatic upshifts when the engine is revved to the limit. The centrally controlled interaction between the M xDrive all-wheel-drive system and the Active M Differential helps to effectively channel the engine’s output to the car’s wheels and generates enough extra traction to achieve acceleration times worthy of a super-sports car.   The engine’s torque is variably distributed between the front and rear wheels via the transfer case’s electronically controlled multi-plate clutch, before the Active M Differential splits it again between the two rear wheels, as appropriate.

The rear-wheel-biased setup of M xDrive provides the BMW M5 Competition with standout agility. In addition, the driver can vary the distribution of power between front and rear wheels themselves, and also adjust the responses of the Dynamic Stability Control (DSC) system. M Dynamic Mode (MDM) holds the key to controlled drifts and entertaining handling, and offers another three modes (with DSC deactivated) which have been optimised for track driving: as well as 4WD and 4WD Sport, drivers also have the choice of 2WD mode (also automatically disabling DSC) for the traditional BMW M5 rear-wheel drive experience. With its unrivalled package including newly introduced features such as M Mode and a central information display enlarged to 12.3 inches, the BMW M5 Competition is a more compelling proposition than ever.