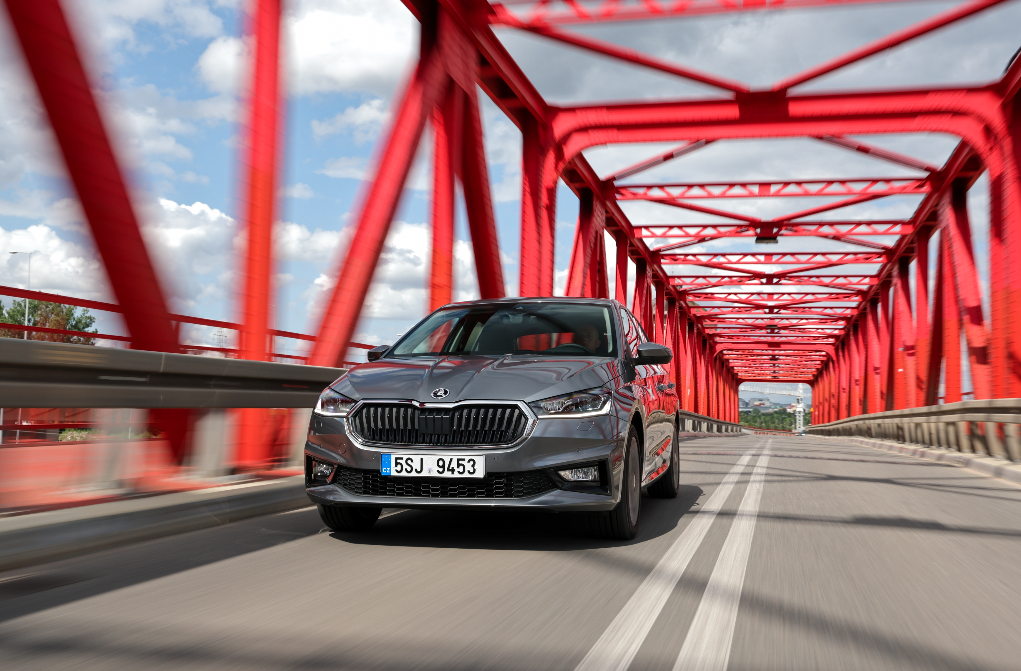 The fourth-generation Fabia continues ŠKODA’s extraordinary success story of offering all you need and that little bit more. This is the first Fabia to be based on Volkswagen Group’s modular MQB-A0 platform. It is the most spacious car within its segment and boasts further enhanced comfort features as well as a several new safety and assistance systems. Classic brand qualities such as excellent value for money, high functionality and a host of Simply Clever features, make this car the perfect entry-level model to the ŠKODA range.

Showcasing an emotive design, new proportions and even more space, the Fabia has taken the next step in its evolution. The fourth generation exceeds the four-metre mark for the first time, offering an even more spacious interior. At the same time, the new Fabia continues the current ŠKODA design language and looks particularly dynamic with its athletic proportions, sculptural lines, and sharply drawn headlights and tail lights featuring LED technology. Sophisticated details, such as aerodynamically optimised wheels and actively adjustable cooling shutters in the front bumper’s lower air inlet, allow for a drag coefficient (cd) of 0.28, setting a new record in the small car segment.

The latest Fabia’s significantly more emotive appearance is the result of new dynamic proportions, ŠKODA-typical crystalline features, such as the razor-sharp headlights and tail lights, as well as sculptural lines on the bonnet. Small details really add to the overall look. These include body lines on the front doors stylising the characteristic triangle of the Czech flag.

This is the first ŠKODA Fabia to be based on Volkswagen Group’s modular MQB-A0 platform and it outperforms its predecessors in every aspect but with virtually no change in weight. It is 111 mm longer, now measuring 4,108 mm, also making it the first Fabia to exceed the four-metre mark. At 2,564 mm, its wheelbase has gained 94 mm, while the width of the fourth generation has increased by 48 mm to 1,780 mm. The greater exterior dimensions result in even more passenger space. ŠKODA has also increased the Fabia’s boot capacity by 50 l (to 380 l) – the predecessor’s was already the largest in the segment. With the rear seats folded down, the capacity rises to 1,190 l. There is a choice of nine body colours, including the new Phoenix Orange and Graphite Grey metallic paint finishes. As part of the Colour Concept, metallic Graphite Grey and pearl-effect Magic Black can also be chosen as contrasting paintwork for the roof, wing mirror caps and alloy wheels. The ŠKODA grille surround can also be ordered in Graphite Grey. A panoramic glass roof is another optional feature.

The front of the new Fabia is characterised by razor-sharp, narrow headlights which extend to a striking, hexagonal grille. Low beam, high beam, the indicators and daytime running lights feature LED technology as standard, while the optional full-LED headlights provide more light-intensive low beam and high beam, as well as cornering and adaptive light functions. The sharply drawn, crystalline tail lights are also available in a full-LED variant on request.

The Fabia’s aerodynamics have predominantly been developed using what is known as CFD (Computational Fluid Dynamics) simulations. During the development phase of approximately three and a half years, the ŠKODA engineers computed more than 3,000 of these simulations. ŠKODA has set a new record in the small car segment by reducing the drag coefficient (cd) to 0.28 – the previous generation was 0.32.

ŠKODA has installed cooling shutters in the front bumper’s lower air inlet – the first time this technology has been used in this vehicle segment. To improve aerodynamics, actively adjustable slats automatically close when there is little need for cooling. To allow for a high level of cooling or to accommodate short stops, the system opens the shutters so the maximum amount of air can flow in. To further reduce drag, a larger roof spoiler and side finlets optimise the airflow at the rear. At the front, the air is guided through vents in the bumper, known as Air Curtains, in a particularly aerodynamic manner close to the side of the body and the wheels. Twelve panels now cover a larger part of the underbody instead of three, especially in the areas that are crucial for aerodynamics, such as the engine bay and the axles.

The housings of the electrically adjustable and heated wing mirrors, which for the first time in the Fabia dim automatically on the driver’s side and fold electrically as an option, are smaller than in the predecessor. This improves the car’s aerodynamics, as do the Proxima and Procyon alloy wheels, which also make their Fabia debut and feature special, aerodynamically optimised plastic trims. The wheel options include 15-inch steel wheels, as well as seven different alloys ranging from 15 to 18 inches. The optional, burnished 18-inch Libra alloy wheels in black are the range-topping variant.

The new ŠKODA Fabia boasts an extremely high level of torsional stiffness, which increases safety, improves handling and ensures exceptional durability. To achieve these results while keeping the weight virtually the same as its predecessor’s, ŠKODA has designed the MQB‑A0‑based body to the latest standards, using significantly more hot-formed and high-strength steel components than in the previous model. They are mainly used on the A and B pillars, the bulkhead and the transmission tunnel. The proportion of the three hardest steel types – advanced high-strength steels, ultra-high-strength steels and press-hardened steels – rose from 15% to 40%. Overall, nearly 80% of the new ŠKODA Fabia’s body is made up of high-strength steel components. 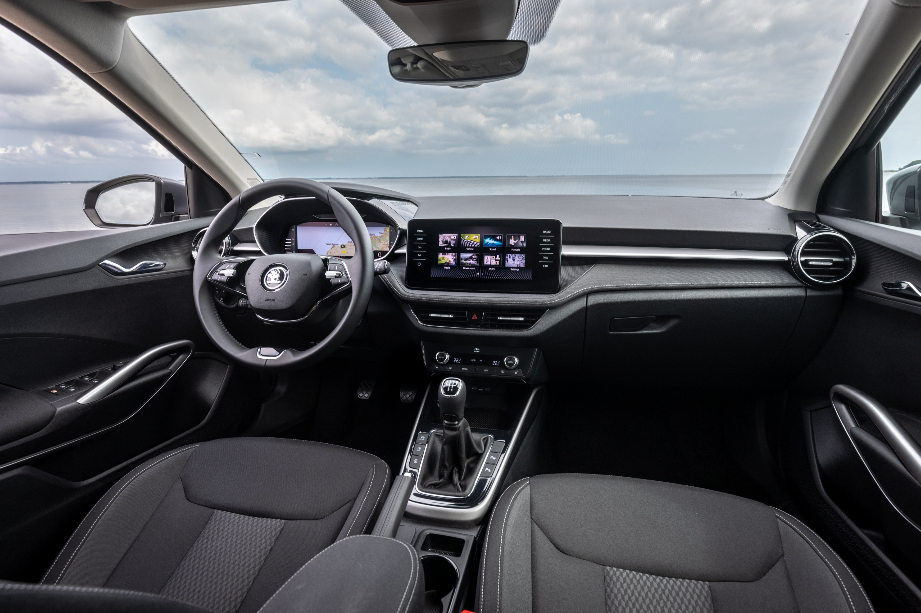 The new ŠKODA Fabia’s interior is more spacious and comes with additional comfort features, striking a perfect balance between emotiveness and ergonomics. In keeping with ŠKODA’s current interior design concept, its look is characterised by fresh colours and the free-standing infotainment display measuring up to 9.2 inches. Large circular air vents and the new Fabia lettering on the sides of the instrument-cluster housing add further visual design touches. Other options making their FABIA debut include a heated windscreen and heated steering wheel (features previously found in higher-tier vehicles). ŠKODA will offer four trim levels in Ireland from market launch.

All engines offered for the new Fabia come from the EVO generation. They are even more economical than the predecessor units and fulfil the Euro 6d emissions standard. The new range‑topping engine is the 1.5 TSI with an output of 110 kW (150 PS) and a 7-speed DSG as standard. Up to a power output of 70 kW (95 PS), the Fabia comes with a 5-speed manual gearbox; for the 1.0 TSI producing 81 kW (110 PS), there is a choice between a 6-speed manual gearbox and a 7‑speed DSG. 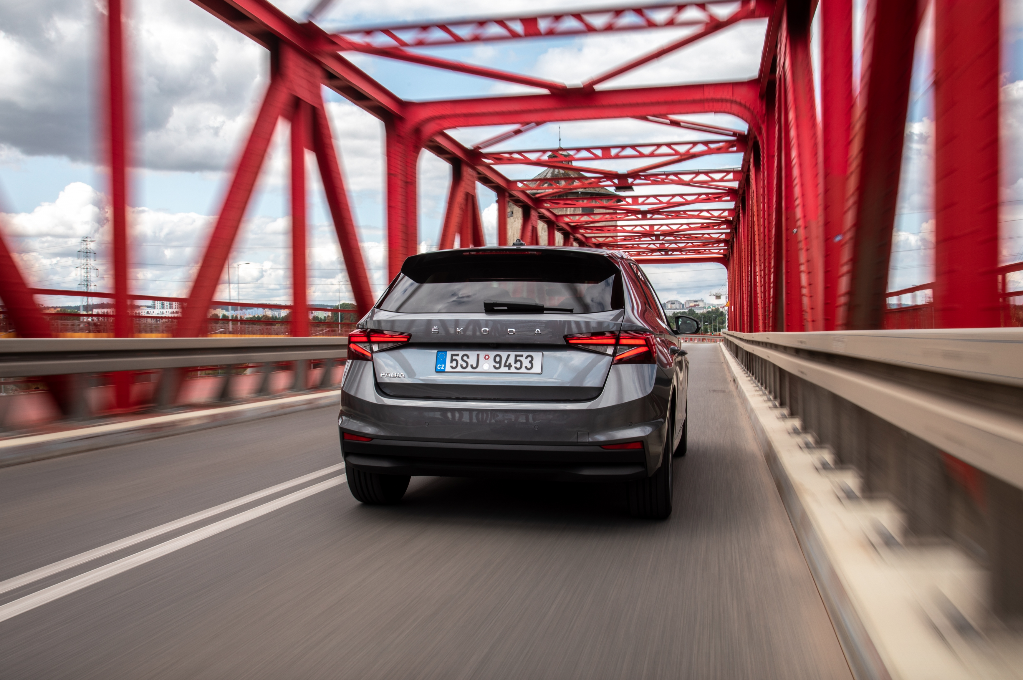 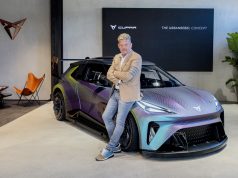