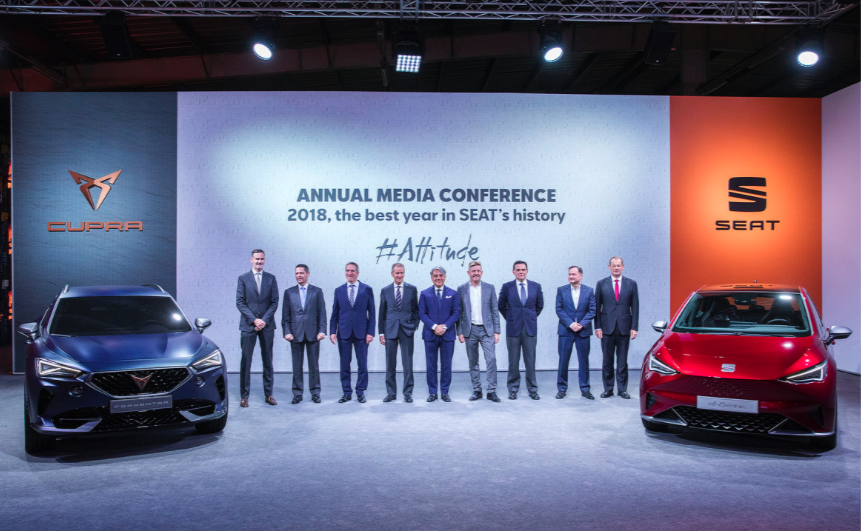 SEAT presented its electric strategy today which, until the beginning of 2021, will include six electric and plug-in hybrid models. The electric version of the Mii and el-Born will be the brand’s first two fully electric models, while the new generation Leon and the Tarraco will feature a plug-in hybrid version. Furthermore, the CUPRA Leon and the CUPRA Formentor will also have a plug-in hybrid variant. SEAT President Luca de Meo also announced today at the company’s annual media conference that the CUPRA Formentor, the new CUV that was unveiled at the Geneva Motor Show, will be built at the Martorell factory.

For the first time in the history of the company, SEAT will develop a new vehicle platform in collaboration with the Volkswagen brand, a smaller version of the Modular Electric Drive Toolkit (MEB) on which multiple vehicles of the size of around four metres in length by different brands, SEAT among them, will be made. The goal of the new platform is to develop affordable electric vehicles, with an entry level price below 20,000 euros. More than 300 highly skilled engineers will be participating in this project in Spain.

During the presentation of the results held at SEAT’s corporate headquarters in Martorell, company CEO Luca de Meo stated that “SEAT now has a clearer role in the Volkswagen Group, and thanks to the results obtained, we have earned the new electric vehicle platform.” “For the first time, the SEAT Technical Centre will be developing a platform that may be used by more brands around the globe”, added de Meo.

Volkswagen AG CEO Dr. Herbert Diess attended the presentation and emphasised SEAT’s role within the Volkswagen Group: “SEAT is playing a new role within the Volkswagen Group taking on even more responsibility. This year’s achievements underline SEAT’s potential to make use of growth opportunities and open new markets.” Dr. Diess added that “the small electric platform project is a great step towards an even more affordable electric mobility. SEAT will realize the first electric vehicle that is especially designed for urban journeys.”

The electric offensive reaches further than new models and also encompasses a micromobility strategy which, as announced by the CEO of SEAT during the Mobile World Congress, the company is going to lead for the Volkswagen Group. The recently unveiled Minimó concept car plays a part in this strategy and the electric SEAT eXS kickscooter are two examples of urban micromobility solutions put forward by the company.

In addition, deliveries increased to the highest level in SEAT’s nearly seven decades of existence, and the figure of 517,600 vehicles sold (10.5% more than in 2017), made SEAT the fastest growing brand in Europe last year. Boosted by the Ateca and the Arona, selling models with a greater contribution margin helped the improvement of SEAT’s profit results. In its first year as an independent brand, CUPRA was instrumental in increasing the company’s bottom line after sales went up by 40% to reach 14,400 units.

According to Luca de Meo, “2018 was the best year in the history of SEAT. For the first time we have good products in the relevant and most profitable segments, which has led us to become one of the fastest growing brands in Europe in the past three years. The SUV offensive we began in 2016 exceeded our most optimistic expectations and one out of every three cars sold last year entered in this category. SEAT can now look the future straight in the eyes.”

Vice-president for Finance, IT and Organisation Holger Kintscher pointed out that “as SEAT stands today, it is a financially sound, sustainable company. We have a thorough cost-efficiency programme and the resources to face the technological transformation of the automotive industry. We need that to stay profitable in the future.”

In 2018, SEAT exported 80% of its production output and consolidated itself as Spain’s largest industrial exporter, with close to 3% of the country’s total export figure. The goal for forthcoming years is to step up the company’s globalisation. In this sense, it is rolling out an ambitious growth strategy in North Africa, where it will lead the Volkswagen Group’s vehicle assembly project in Algeria and aims to increase its presence in the region in the medium term. Latin America is another potential territory for the brand to expand in, and there are plans to begin operations in Chile in the second half of 2019 and strengthen its presence in Colombia. In China, SEAT is a part of the JAC Volkswagen joint venture and preparations are being made for its entry in the world’s largest car market.

From an industrial standpoint, in 2018 SEAT began producing the Audi A1 in the Martorell factory. This model, as well as the Ibiza and the Arona, is being made on the MQB A0 platform, which generates synergies and increases production efficiency. Today, the Martorell plant is working at above 95% of its current capacity and turns out more than 2,300 vehicles daily. Furthermore, 2018 also saw the start of production of the Tarraco in Wolfsburg, at the heart of the Volkswagen Group.

In the past three years, SEAT has recruited around 1,500 people and today the company’s workforce stands at more than 15,000 professionals. In addition, and as outlined in its collective bargaining agreement, next April 15th the employees will receive a profit distribution payment of 1,068 euros, which is 49.2% more than in 2017.

SEAT, ready for the future
The automotive industry is experiencing a transformation that poses challenges and opportunities. The fight against climate change and the goals of reducing emissions are the major issues that are going to affect the car industry in upcoming years, as well as connectivity and new mobility services.

In this context, SEAT is going to create a software development centre to gain a competitive edge. The Metropolis:Lab Barcelona is going to become integrated in the new centre in order to continue to develop innovative solutions for better mobility. Other independent SEAT companies, such as XMOBA, will also operate out of this new centre, which will be located in Barcelona and staffed by 200 professionals, to take full advantage of all synergies.

The electric offensive which will include six electric and plug-in hybrid SEAT and CUPRA models until the beginning of 2021 is also part of SEAT’s response to these challenges. In addition, the development of a new electric platform for urban vehicles, in collaboration with the Volkswagen brand, will serve as the basis for creating electric vehicles that are affordable to everybody. These will see the light in a period of three to four years and will help democratise electric mobility. 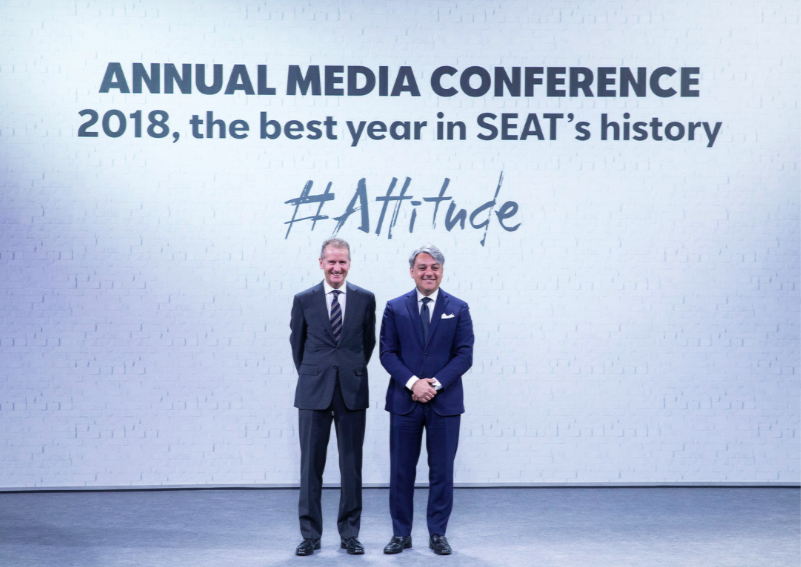