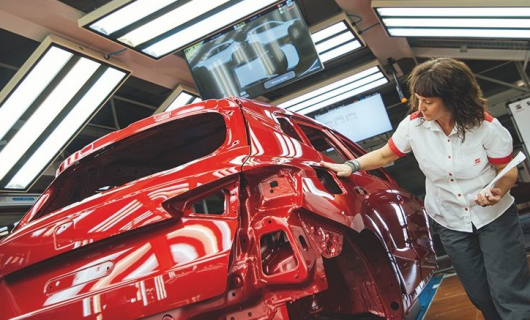 The SEAT factory in Martorell, which this year celebrates its 25th anniversary, reached another milestone in 2018 by exceeding the figure of 10 million vehicles produced. In the past quarter century, 39 different models have rolled off the production lines of Spain’s largest car factory, ranging from the second generation SEAT Ibiza and the first SEAT Cordoba to the SEAT Arona or the Audi A1, which is now into its first few weeks of production. The factory was inaugurated in 1993 following an investment of 244.5 billion pesetas (1.47 billion euros). SEAT transferred production there after 40 years in the old Zona Franca factory in Barcelona and since then, the brand’s main models have been made in Martorell, as well as Audi’s Q3 and A1. The factory is the Volkswagen Group’s third largest in Europe, and has become the benchmark smart factory of Industry 4.0.

The vehicle number 10 million, an Arona FR 1.5 TSI combining the colours Desired Red and Midnight Black, is on display this week in the Martorell factory as a part of the exhibition to commemorate the plant’s 25th anniversary. This Arona was built on the MQB A0 platform, which it shares with the Ibiza and newcomer Audi A1. SEAT was the Volkswagen Group’s first brand to use this platform, which allows for greater manufacturing flexibility as it supports various models and enables different kinds of body styles within the same segment, and has made it possible for Martorell to add three new models to its lines in the past 18 months.

SEAT Vice-president for Production and Logistics Dr. Christian Vollmer stated that “since its inauguration in 1993, the heart of SEAT has been known for being at the forefront of innovation. Thanks to continuous investment in technology and a highly qualified workforce, the factory has improved the quality of products and processes year after year until becoming what it is today – the factory that makes the most cars in Spain and a benchmark of Industry 4.0 and digitalisation.”

In these past 25 years, the production processes in the factory have evolved considerably. In this sense, SEAT is firmly committed to transforming the Martorell plant to Industry 4.0, with the goal of creating a factory that is smart, digitalised and connected, which adapts to production needs and processes, and which manages resources and communication among areas with greater efficiency. As an example of this transformation, today the factory has more than 2,000 robots which play an essential role. They are in constant movement to assemble the more than 3,000 parts that go into every new car, and they will play an even more important role in upcoming years. All of these 4.0 novelties coexist with the 8,000 workers at the factory, who turn out 2,400 cars every day, which is the equivalent of one car approximately every 30 seconds.

SEAT’s product offensive over the past two years has required a record investment and R&D expenditure figure, which last year amounted to 962 million euros. Today, the factory produces the Ibiza and the Leon, which will launch a new generation in 2019, as well as the urban crossover Arona. In addition, the Audi A1 has recently been added to the production lines. It is only being made in the SEAT factory and distributed to all the markets where it is sold. Audi allocated it to Martorell in the wake of the production success of the Audi Q3, which was made there exclusively for seven years. Owing to the increase in production and in the number of models produced at the Martorell factory, as well as the launch of strategic projects related with car connectivity and the company’s digitalisation and the development and launch of the Tarraco, the workforce has increased to more than 15,000 professionals. Of these, more than 12,500 work In Martorell, both on the production line as in the company’s central services and the SEAT Technical Centre, where all of the brand’s vehicles are designed and developed. In 2018 alone, more than 500 employees joined the company with an open-ended contract.

SEAT has stepped up its sustainability projects in recent years and its commitment encompasses all corporate activities, including R&D, production, logistics and sales, among others. In this sense, the Martorell factory has been implementing the ECOMOTIVE FACTORY plan since 2011 with the goal of achieving facilities that are efficient, sustainable and ecologically responsible. The company aims to reduce the level of its 2010 environmental footprint by half by 2025. In the last 7 years, SEAT has already reduced its environmental impact by 35.5% thanks to initiatives such as SEAT al Sol, the largest solar plant in Europe’s automotive industry; a facility that recovers energy from the drying ovens, or a pavement that reduces pollution by 40%, among others.

SEAT is the only company that designs, develops, manufactures and markets cars in Spain. A member of the Volkswagen Group, the multinational has its headquarters in Martorell (Barcelona), exporting 80% of its vehicles, and is present in over 80 countries on all five continents. In 2017, SEAT obtained an after tax profit of 281 million euros, sold close to 470,000 cars and achieved a record turnover of more than 9.5 billion euros. The SEAT Group employs more than 15,000 professionals and has three production centres – Barcelona, El Prat de Llobregat and Martorell, where it manufactures the highly successful Ibiza, Arona and Leon. Additionally, the company produces the Ateca and the Toledo in the Czech Republic, the Tarraco in Germany, the Alhambra in Portugal and the Mii in Slovakia. The multinational has a Technical Centre, which operates as a knowledge hub that brings together 1,000 engineers who are focused on developing innovation for Spain’s largest industrial investor in R&D. SEAT already features the latest connectivity technology in its vehicle range and is currently engaged in the company’s global digitalisation process to promote the mobility of the future.