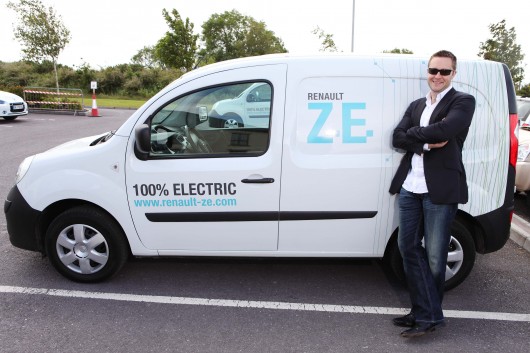 Renault Ireland’s managing director Eric Basset has set a challenge for his dealer network and team that will see 1,000 Renault electric vehicles sold by the manufacturer in Ireland next year. The Renault boss, who has overseen the marque’s market share double since his arrival in Ireland in 2009, is confident that one in ten Renault vehicles sold in 2012 will be electric.

He has also stood by his commitment to make electric vehicles affordable to all and reminds those in any doubt that Ireland is leading the way in Europe for infrastructure and availability of electric vehicles. Renault launched its electric vehicle offensive in 2008 with the announcement of its comprehensive, line-up of four electric models, the first of which arrived on Irish roads yesterday.

The Renault Kangoo Z.E. the first electric vehicle offering from Renault was launched yesterday and is available to test drive at dealerships all over the country priced from €16,400 incl. VRT ex VAT and including the Government grant of €3,800. The electric mini van has already seen a huge interest in France where 15,000 Kangoo Z.E. have already been ordered by some of France’s largest companies including La Poste, the French postal service.

Renault is the only manufacturer to introduce a range of 100% electric vehicles, from the Kangoo Z.E. mini van to the Fluence ZE Saloon, the Twizy urban quadricycle and the stylish compact hatch the ZOE, all due to appear on Irish roads in 2012. The Kangoo Z.E. battery will cost € 75 ex VAT per month to lease (based on 48 months, 15,000 KM per year ) . Renault Kangoo Z.E. will be available in three sizes including the Kangoo Maxi Z.E. 2 seat and 5 seat models. It comes with five years unlimited mileage warranty as standard.