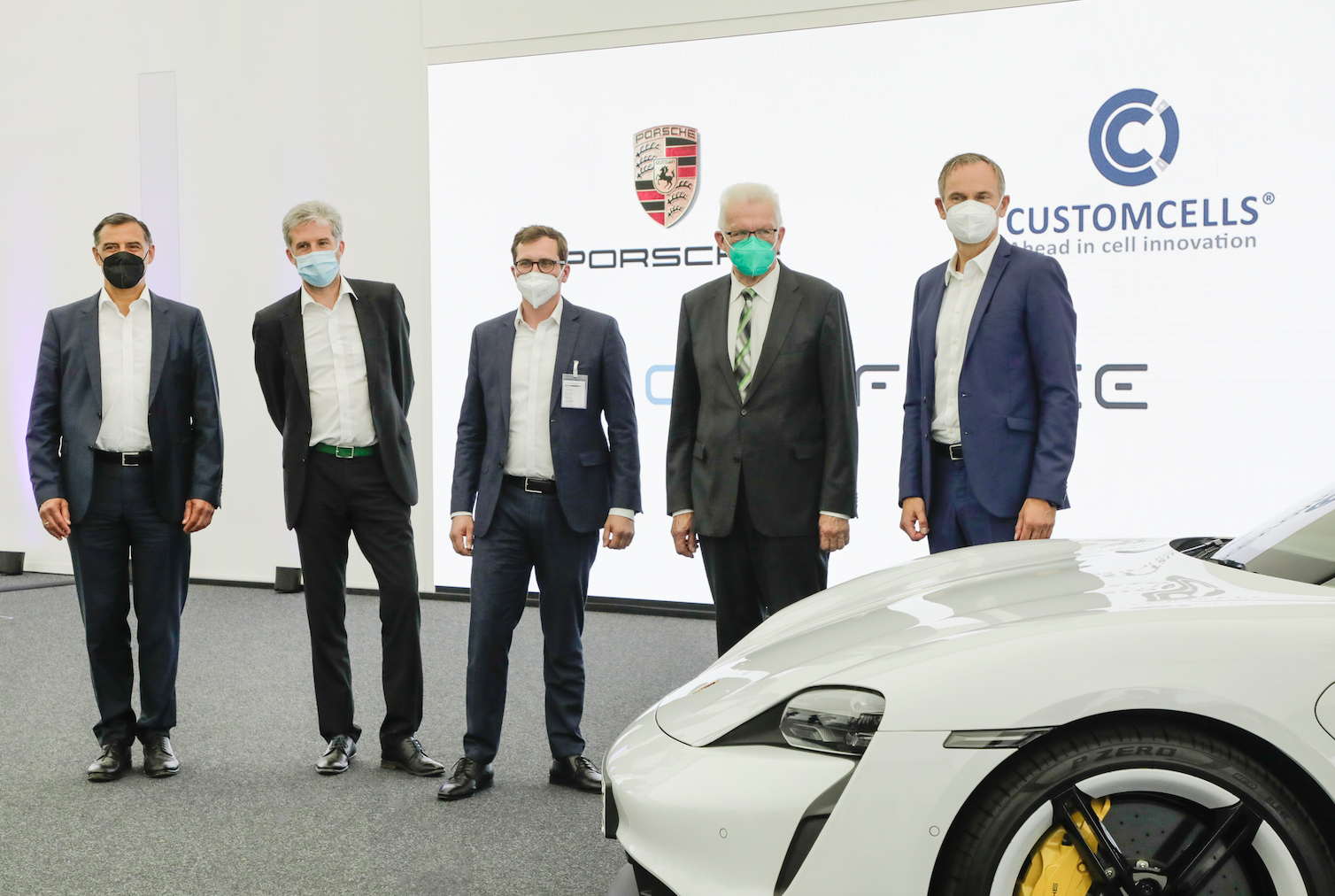 The latest step in the electric offensive: Porsche is investing a high double-digit million amount in the new company Cellforce Group GmbH. The sports car manufacturer is therefore extending its technological leadership role in the field of electric mobility. Porsche and joint venture partner Customcells today announced the launch of production of high-performance battery cells at the Weissach Development Centre.

“The battery cell is the combustion chamber of the future. As a new Porsche subsidiary, the Cellforce Group will be instrumental in driving forward the research, development, production and sales of high-performance battery cells,” says Oliver Blume, Chairman of the Executive Board at Porsche. “This joint venture allows us to position ourselves at the forefront of global competition in developing the most powerful battery cell and make it the link between the unmistakable Porsche driving experience and sustainability. This is how we shape the future of the sports car.”

On the political side, Winfried Kretschmann, Minister President of Baden-Württemberg, Thomas Bareiß, Parliamentary State Secretary at the Federal Ministry for Economic Affairs and Energy and Boris Palmer, Mayor of the City of Tübingen, accompanied the official start of the company foundation. On the part of the companies involved, Oliver Blume, CEO of Porsche AG, Michael Steiner, Porsche Board Member for Research and Development, as well as Leopold König and Torge Thönnessen, the managing directors of Customcells Itzehoe GmbH, were on site. The new venture, in which Porsche has a majority stake of 83.75 per cent, has its headquarters in Tübingen. The university town is also on the shortlist for the location of the battery factory, which is to be located in close proximity to the research and development center in Weissach as well as the headquarters of Porsche AG in Stuttgart-Zuffenhausen. The number of employees is expected to grow from the initial workforce of 13 provided jointly by both companies to up to 80 by 2025. The Federal Republic of Germany and the state of Baden-Württemberg are funding the project with around 60 million euros.

“We founded Customcells with the aim of developing customer-specific battery cells for the most demanding of applications, and this is exactly what we can now realise together with Porsche. The goal for the planned production plant is to reach a minimum annual capacity of 100 MWh. This is equivalent to high performance batteries for 1,000 vehicles,” according to Torge Thönnessen, CEO of Customcells. “We are not only contributing our expertise in cell technology and production into our partnership with Porsche, but also agility, innovative strength and individual problem-solving skills,” says Leopold König, CEO of Customcells.

Minister President Winfried Kretschmann says: “With the founding of Cellforce today, Porsche and Customcells are sending an important signal: electrification is one of the central pillars of the energy and transport transition and modern storage technologies are a key technology of the future. Whoever masters these storage technologies secures prosperity and jobs. Baden-Württemberg brings together all essential parts of the value chain, from individual high-tech components and production technology for the manufacture of batteries to battery systems and recycling. We are working on expanding this further – inter alia in the strategy dialogue Automotive Industry BW.”

Parliamentary State Secretary at the Federal Ministry for Economic Affairs and En-ergy Thomas Bareiß: “I am delighted that the founding of the Cellforce Group joint venture has taken the decisive step towards this ambitious battery project. The project is a prime example of what we wanted to achieve with the IPCEI battery cell production initiative. We are pleased that we, as the Federal Ministry for Economic Affairs and Energy, can provide the necessary boost with this contribution to get another battery cell production started in Germany. Baden-Württemberg is increasingly becoming a battery hotspot and thus securing qualified workers at a highly innovative location. I wish all employees of the company all the best.”

Mayor Boris Palmer: “In Tübingen, excellent research has always been ideally complemented by economic implementation and market readiness. We are pleased that another building block for more environmentally friendly mobility is to be built in our city in the future. The high-performance battery cells also fit perfectly with our ambitious climate protection program to become CO2-neutral by 2030. This is the only way it can work: economic growth combined with ecological progress.”

“Porsche was founded as an engineering and development office in Stuttgart in 1931. To this day, you cannot purchase the technology that is at the heart of our high-performance sports cars. We develop it ourselves,” says Michael Steiner, Member of the Executive Board, Research and Development at Porsche. “That is why it is only logical for us to develop and build the key technology of the future – the battery cell – ourselves. It is just as logical that we first test this new high tech in the most competitive of environments – motorsport. Our electric sports car Taycan also received key developments and its leading technical features from the race track, from the Le Mans-winning Porsche 919 Hybrid.”

The chemistry of the new high-performance cells relies on silicon as the anode material. With this material, it now seems possible to significantly boost the power density compared to current good series batteries. The battery can offer the same energy content with a smaller size. The new chemistry reduces the battery’s internal resistance. This allows it to absorb more energy during energy recuperation and at the same time it offers improved performance for fast charging. Another special feature of the Cellforce battery cell is the fact that it is better able to withstand high temperatures. These are all qualities which are highly valued in motorsport. In addition, use on the race track does not necessarily require the battery to function in sub-zero temperatures nor remain stable for years over many charging cycles – goals which have yet to be achieved with this new cell technology.

The world-leading chemical company BASF has been chosen as a cell development partner for the next generation of lithium-ion batteries. As a part of the collaboration, BASF is exclusively providing high-energy HEDTM NCM cathode materials for high-performance cells that enable fast charging and high energy densities. At BASF’s manufacturing facilities for primary products of cathode materials in Harjavalta, Finland, and for cathode materials in Schwarzheide, Brandenburg, Germany, BASF will be able to produce battery materials with an industry-leading low carbon footprint from 2022.

The idea for a manufacturing plant for high-performance battery cells came from an initiative of the P3 Group. The Stuttgart-based management consultancy developed the concept and submitted in 2019 a funding application with Customcells as part of the European IPCEI project EuBatIn (Important Project of Common European Interest – European Battery Innovation), which aims to build up a competitive European value chain for lithium ion batteries, based on innovative and sustainable technologies. From the automotive industry Porsche got involved as a project partner. This year P3 Group decided to maintain neutrality and independence in the market and not to be directly involved in the joint venture. P3 acts as a technology consultancy with a deep technical understanding in the field of battery cells and has concluded a long-term service contract with the Cellforce Group.

The contracts between Porsche and Customcells were signed on 21 May 2021. The Managing Directors of the new Cellforce Group GmbH are Markus Gräf as Chief Operating Officer and Wolfgang Hüsken as Chief Financial Officer from Porsche, and Torge Thönnessen as Chief Technology Officer from Customcells.

Customcells is one of the world’s leading companies in the development of special lithium-ion battery cells. At the company’s locations in Itzehoe (Schleswig-Holstein) and in Tübingen (Baden-Württemberg), Customcells develops and produces application-specific battery cells ranging from prototypes to small and medium series – Made in Germany. Since it was founded in 2012, Customcells has acquired important know-how in the field of cell development with diverse materials (cathodes, anodes, separators, electrolytes) and coating technologies. Customcells manufactures small series of special lithium-ion battery cells, for example for the aviation and shipping industries, based on agile manufacturing concepts and state-of-the-art research and production facilities.