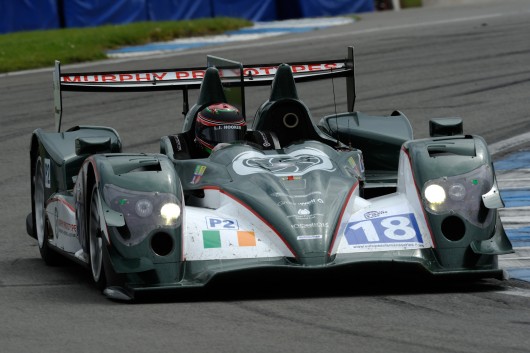 After enjoying a months break away from the track, last weekend (14th/15th July) saw Irish sportscar Team Murphy Prototypes back in action competing in the Donington 6 Hours, round 2 of the European Le Mans Series. Buoyed up by the teams last performance in the Le Mans 24hrs, the team went into the Donington Park weekend with high hopes of a podium with none of the faster LMP1 class cars competing in this series.

The first track action of the weekend on Friday was largely a follow-on from BGP the previous weekend, with inclement weather conditions throughout the Free Practice sessions at Donington Park. Warren Hughes commented after FP1 “We have a strong entry in LMP2 here at Donington Park for round 2 of the ELMS – it is a shame that it has been overshadowed by attention on the size of the grid. FP1 was very wet this morning and it was getting wetter toward the end before I got in to the car. I had a look at the track over 3 Laps but the cars were getting to the point of aquaplaning so we came in early, there was no point putting the car at risk.”

“Sunday is forecast to have better weather so we are not going to chase a wet set-up, but it was important that the all three of us (drivers) ran in the conditions during FP1. All seems to be fine with the car. We are reasonably competitive but the track does not drain very well here and with the undulations and gradients there are lots of ‘rivers’ crossing the track so we are not going to see any particularly fast times today. We are going out again in FP2 now that the rain has stopped so we shall see what running we can do before the end of the day.”

Unfortunately the rain continued to fall into the afternoon and with the track beginning to resemble a river FP2 was delayed until 17:00. FP2 did finally get underway with lots of standing water but the track improved and a dry line appeared with Jody Firth setting a 1:40.675 almost as quick as the morning’s top time. Later in the session Warren Hughes went on to top the time sheets with a 1:36.978. All 3 Murphy drivers were fastest in their stints.

Brendon Hartley commented “The car felt really good! I went out on track after Jody and although there was still a lot of heavy standing water I was improving my time on every lap. I believe I was over 2 seconds faster than everyone at one point, but all three of us were competitive in the car today. If it rains over the rest of weekend I feel very confident that we should do well and am happy with the job we did today. Everything is working well, so bring on tomorrow.”

Murphy Prototypes went on to make some small set-up change for Saturday’s qualifying session after some very good FP3 feedback from all 3 drivers.

Warren Hughes: “We had a really good FP3 session today. The car seemed to have very good pace in the drying conditions. The car is in a sweet spot and so far so good – things look good for Qualifying.”

Jody Firth: “Warren went out on new tyres for the first stint to collect data for the race. My stint in FP3 was to circulate and comment on the used tyres. The car felt well balanced and secure for the race. We are optimistic, for wet or dry conditions, and have got the pace to win tomorrow.” 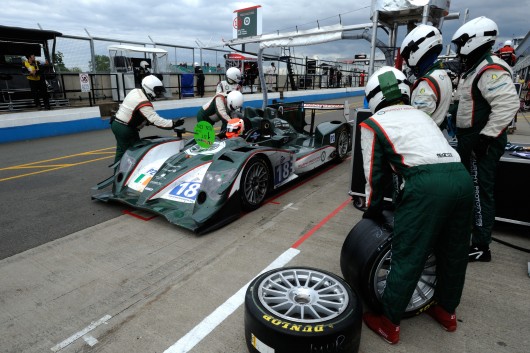 Brendon Hartley: “I was quickest again on track in FP3 and the car felt good. We are confident for a good race and are happy with our set-up.”

Jody Firth had the honour of qualifying the young Irish squad’s LMP2 no18 Oreca-Nissan but unfortunately a small set-up change to try to draw more qualifying speed out of the car had the opposite effect and made the car worse than in FP3. Firth battled to P8 in 1.21.971 but positively though the team knew their set-ups and reverted the car back to its very good race pace.

Firth commented “It was a frustrating qualifying session for me as I could not attack on the track and although we were only a second off pole. It is still a little disappointing getting the prototype to P8 at the chequered flag.” Unfortunately the grid lacked numbers but it was still an incredibly tightly fought battle where only a second separated the top 8 on the provisional Qualifying classification time sheet.”

With a nights sleep under their belts Murphy’s 3 drivers arrived at the circuit on Sunday morning knowing that they would have to fight from start given their poor qualifying spot, but things could be switched around given the length of the race. As the 6 hours of Donington got underway Murphy’s Jody Firth was given a slice of luck as ELMS Pecom and Sebastien Loeb Oreca cars collided and headed for the barriers on lap 1.

An incredibly tightly fought battle ensued with the quality field but the race car was still proving tough to drive meaning that all 3 drivers had to push very hard on the limit. This style of driving caused Hughes to have a spin, costing him 10 seconds. The resulting crack in one louvre meant that the car was called for a noise change which probably cost the team second place. Hartley drove the anchor leg and Murphy Prototypes took the chequered flag at its first 6-Hours of Donington race in a well deserved third place position. For his efforts Hartley picked up Fastest Lap of Race: 1:21.336 on Lap 207.

After the race Greg Murphy, Murphy Prototypes Founder commented “It is great for the team to be on the podium here at Donington, but we are feeling a little flat to be honest. We are disappointed because we believed that we could have won the race and in truth bad luck cost us second place. All in all though the team and drivers did a grand job and I would like to thank them, and all the supporters who came to Donington for our home race, for a good weekend for Murphy Prototypes.”