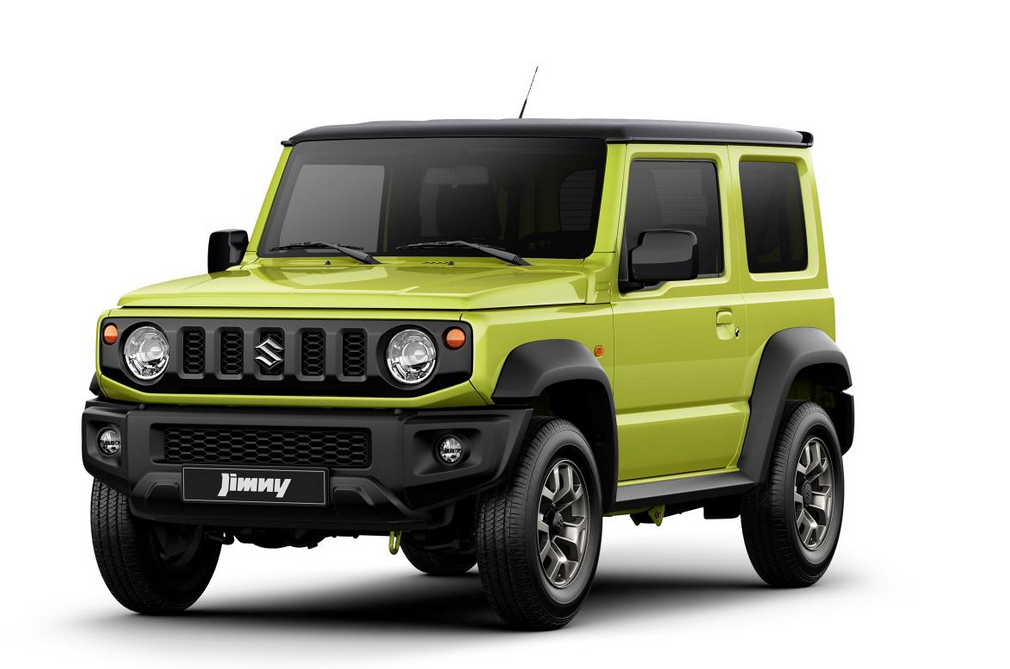 Ever since the first Jimny made its debut in April 1970, it has been a masterpiece of Suzuki’s 4WD technology. It is the one and only authentic off-roader that is small and lightweight, but still retains the off-road performance desired by professionals. Two decades have passed since the third generation model model made its debut in 1998, the Jimny has now evolved to its fourth generation in its nearly 50 years of history. The all-new Jimny now has even more functionality and practicality on both its appearance and performance while still fully embodying the spirit of its much-loved predecessors and its core concept of being the “one-and-only, small, lightweight 4WD vehicle “. The all-new Jimny crafts together simplicity, functional beauty and 4WD technology that leave both off-road professionals and city-users wanting more.The beauty of simplicity and off-road functionality are both realised with its robust exterior. Its strong square body expresses its off-road ability and robustness, as well as contribute to the driver’s situational awareness. The more upright A-pillars and flat clamshell bonnet enhance visibility from the windshield, while the dipped driver and passenger window lines expand visibility from the side windows. The front grille is simple and black, highlighting the round signature headlamps, with 15-inch dark-metallic alloy wheels* accentuating the strong exterior even more. Other exterior features include the drip rails on the roof edges, which prevent water ingress into the cabin when opening or closing a door, wheel arch extensions and side sill covers protecting the body from stone chips and rear lamps gathered on the bumper to achieve a simplistic design and also contribute to a wider rear door opening. Eight body colours, including two new colours developed exclusively for the all-new Jimny: a high-visibility “Kinetic Yellow” designed to stand out in bad weather or rough worksites, and a low-visibility “Jungle Green” which blends in with natural scenery. Many design elements were inherited from past legends, creating a familiar yet distinct Jimny look. Straightforward, practical and down-to-earth, every detail is carefully crafted to realise a beautiful yet functional interior. The handsome black interior is without excessive colours or decoration to minimise distraction and lets the driver concentrate on manoeuvring the vehicle. The horizontal lines defined by the instrument panel, and the vertical lines characterised by the meter cluster and centre console panels help the driver recognise the angle of the vehicle in rough and mountainous terrain.

Everything surrounding the driver and front passenger is built for professional use. Crafted for carefree dependability, the instrument panel and surrounding parts have a scratch and stain-resistant grained finish, and the grip and switches are easy to operate so that it can be handled in off-road conditions as well as while wearing gloves. The meters set in cubic housings are always lit up for clear viewing on and off-road, when the vehicle often passes between sunlit and shaded areas. For intuitive operation of the audio system, a Bluetooth®-compatible Smartphone Linkage Display Audio unit with a 7-inch infrared touchscreen is equipped on higher grades. The rear luggage space can be expanded by folding the rear seats, creating a 377 litre luggage space which is 53 litres larger than its predecessor. Flat all the way across, the quarter trims and seats have been carefully designed to increase storage width, and the backs of the rear seats and luggage room floor are coated with plastic for easy dirt/stain removal. Five utility screw holes are available on each side under the quarter windows along with four luggage hook screw holes around the floor area for flexible usage of the luggage space. Authentic off-roaders must be tough enough to handle the harshest conditions. From its ladder frame structure to its 1.5-litre engine, the all-new Jimny is built for rough-road adventures. But on-road ability was not compromised, with the higher torsional rigidity of the ladder frame providing a more comfortable and solid ride on the road, and newly equipped steering damper on the front suspension minimising steering wheel vibration and kickback. Whether navigating the urban jungle or exploring off the beaten track, the Jimny is sure to satisfy adventurous minds. 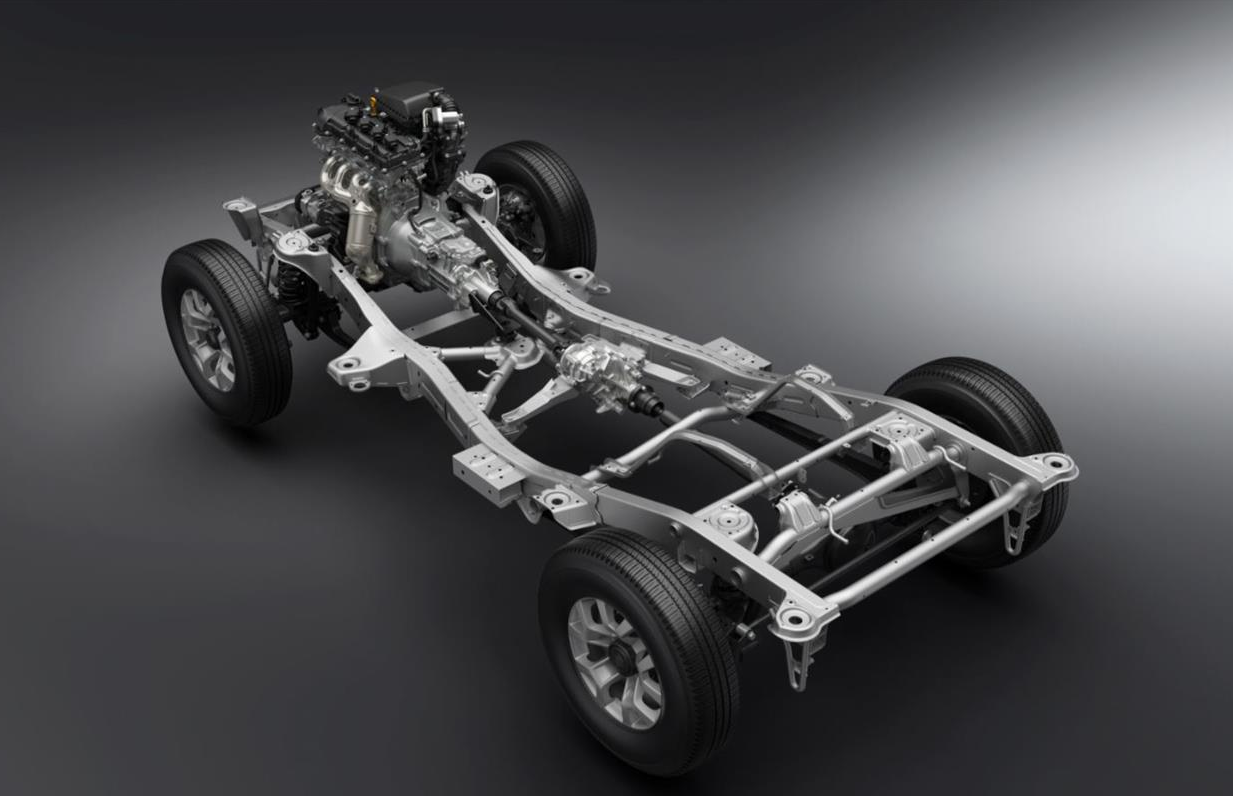 The Jimny incorporates the four essentials for serious off-roading — a ladder frame, the three angles, 3-link rigid axle suspension with coil spring and part-time 4WD with low range transfer gear. Designed for professionals, it features ALLGRIP PRO. The ladder frame structure provides a solid base for suspension components when driving off-road and also helps protect the vehicle body even on bumpy surfaces. For the all-new Jimny, a new “x-member” and two additional cross members have been added for further reinforcement and increased torsional rigidity. The ample approach angle of 37 degrees, ramp breakover angle of 28 degrees and departure angle of 49 degrees allow the Jimny to climb over obstacles and steep hills without scraping its bumpers or underbody. Rigid axle suspensions thrive in bumpy off-road driving. When one tyre is pushed upward by an obstacle, the connected tyre on the other side is pressed downward, giving superior grip on uneven terrain. The Jimny equips the rigid axle suspension on both the front and rear, allowing it to travel even on rough roads. The Jimny features a part-time 4WD system with low range transfer gear, which can be easily switched from 2H (2WD-high gear), 4H (4WD-high gear) and 4L (4WD-low gear) modes by a shift lever directly connected to the transfer gear. Compared to the 4H mode, the 4L mode can transfer more torque to the tyres while in lower gears, for better traction on steep slopes and rough terrain.

When two wheels diagonal from each other lose traction, the Jimny’s brake LSD traction control automatically brake the slipping wheels to redistribute torque to the other side and allow the vehicle to gain traction. This system allows the Jimny to escape slippery surfaces as well as bumpy rough roads that vary on the right and left sides. The former 1.3-litre engine is replaced by a 1.5-litre engine in the all-new Jimny. It delivers stronger torque at all rpm than its predecessor, with ample torque at low revolutions enhancing driving performance especially while driving off-road, where low revolution is often needed. Despite the increased displacement, it has smaller overall dimensions than the engine it replaces, with 15% reduced weight, contributing to enhanced fuel efficiency. The 5-speed manual transmission has optimised gear ratios for the new engine and also offers better fuel efficiency. The shift lever has been redesigned to reduce vibration, and also provides a more solid and direct feeling when changing gears. The 4-speed automatic transmission has also been redesigned to offer less friction and better fuel economy. The shift pattern has been changed from the former gate type to the straight (aligned) type to simplify operation. Suzuki Safety Support is Suzuki’s preventative safety technology that helps the driver avoid accidents and supports the driver to have peace of mind during every day driving. With Dual Sensor Brake Support (DSBS)*, if the system determines that there is a risk of collision with a forward vehicle or pedestrian, it issues an audio and visual warning, increases braking force, or applies strong automatic brakes depending on the situation, in an effort to avoid the collision or reduce damage. Other functions include lane departure warning* and weaving alert function* to help the driver keep alert, and high beam assist* supports relaxing, courteous night driving by automatically switching the high and low beams. In the Jimny, traffic sign recognition monitors the road ahead for traffic signs. When it detects road signs such as speed limits or no passing zones, it displays the sign on the meter display to help the driver remember which road signs the car has passed. For additional traffic signs showing supplementary information, a blank box is displayed under the main traffic sign to inform the driver. The Jimny is the first Suzuki model to adopt this system.

More details on the Suzuki Jimny will be available soon including the Irish launch date. Please check back on www.rev.ie 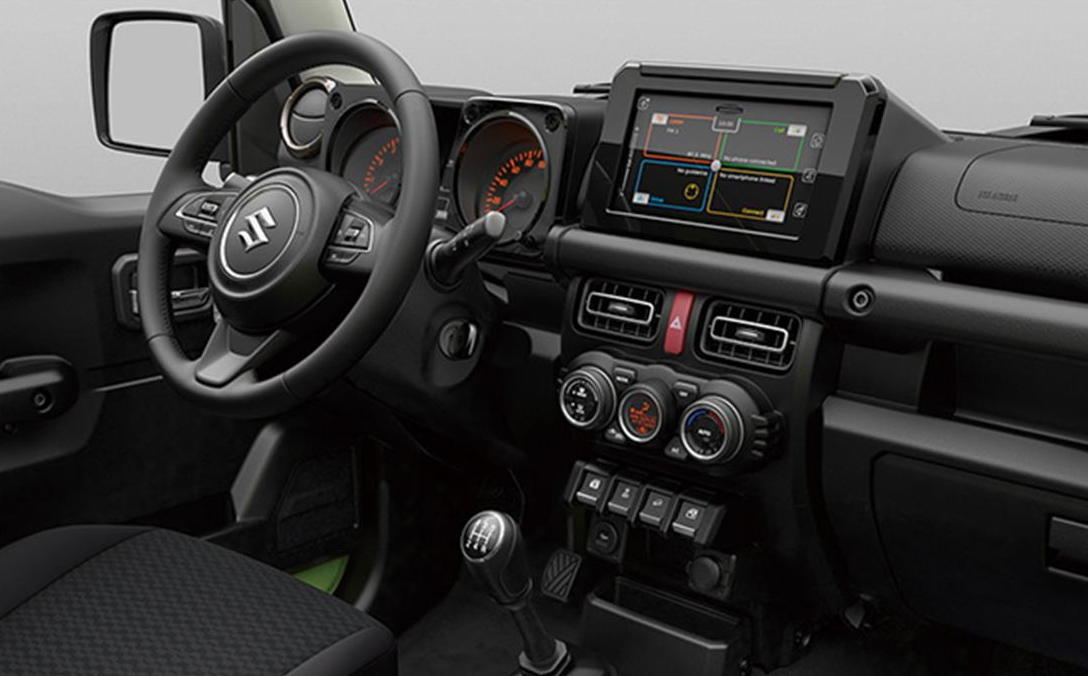