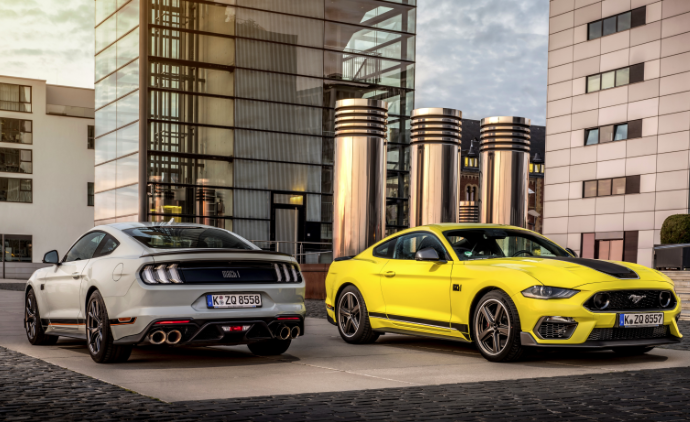 Ford announced that the limited-edition, high-performance Mustang Mach 1 will be available to customers in Europe for the first time ever. Making its European debut at Goodwood SpeedWeek taking place in West Sussex, U.K, in front of a global virtual audience, the Mustang Mach 1 is the best-handling production Mustang ever offered to customers in Europe. Performance is boosted to a level worthy of the iconic Mach 1 moniker with enhanced aerodynamics, a specially-calibrated 460 PS 5.0-litre V8 1 engine and uprated cooling for improved track capability.

A unique suspension setup further enhances road performance and track-readiness. Specially-calibrated MagneRide® 2 dampers and bespoke springs, anti-roll bars and bush specifications deliver improved control and response under high cornering loads. Retuned electric power-assisted steering (EPAS) software enables the Mach 1 to offer the most precise steering of any Mustang in Europe. The result is the fastest production Mustang around a track ever offered to customers in Europe.

In addition to its performance credentials, the Mustang Mach 1 brings exterior design that recalls the iconic Mach 1 Mustangs of the 1960s and 1970s, with bold bonnet and side stripes, performance-derived body-styling and unique 19-inch alloy wheels. The limited-edition model is available in a unique set of eight body colour, stripe and contrast-line combinations, echoing the distinctive design of the original car. Each Mustang Mach 1 is individually numbered with a distinctive plaque according to its build order.

“The original Mach 1 delivered the ultimate in production Mustang performance and proved itself with success in motorsport,” said Matthias Tonn, Mustang Mach 1 chief programme engineer for Europe. “The new Mach 1 is the most capable Mustang ever to reach Europe, with track-ready ability and a unique style that is more than worthy of wearing such a legendary badge.”

The Mustang Mach 1 features a 460 PS version of Ford’s 5.0-litre V8 all-aluminium petrol engine – specially modified for improved performance both on the road and on track. An Open Air Induction System, intake manifold and 87 mm throttle bodies are shared with the Mustang Shelby GT350 model available to Ford North America customers, increasing the free flow of air into the engine. The enhanced breathing works alongside recalibrated engine management software and a combination of low-pressure port fuel injection and high-pressure direct fuel injection for a “reward-to-rev” character and 7,500 rpm red line. Peak power is delivered at 7,500 rpm, with peak torque of 529 Nm delivered at 4,600 rpm.

The TREMEC six-speed transmission features rev-matching for smooth, seamless gear-changes that enhance refinement on the road, and performance on the track. The technology uses the engine’s electronic control system to briefly “blip” the throttle as the driver downshifts – matching the engine rotation speed to that of the gear that is being selected. Flat shift capability is also delivered – allowing drivers to engage the next gear without lifting the throttle pedal. The transmission’s enhanced performance is enabled in part using a dedicated oil-cooling system to cope with the increased demand.

The Mustang Mach 1 benefits from a series of aerodynamic changes that bring performance gains as well as providing a distinctive look that pays homage to the styling of the original models. A unique front-end configuration includes a new two-piece upper grille, new lower grille and splitter, and new side grilles: all contributing to the improved aerodynamic and cooling performance.

The Mustang Mach 1 creates 22 per cent more downforce than the Mustang GT, supported by a rear diffuser design shared with the Mustang Shelby GT500 model available to Ford North America customers, and a longer undertray that incorporates dedicated fins that direct cooling air to the brakes.

The shape of the front splitter has been designed to deliver increased downforce for improved grip on track, while the bespoke, single-deck rear spoiler has been matched to the front aerodynamics to ensure the perfect lift balance from front to rear.
Bespoke suspension tuning is designed to cope with the high demands of track driving. The MagneRide® 2 adjustable suspension system electronically controls the magnetorheological fluid inside the damper to respond in real time to changing road conditions, and has been recalibrated for optimum performance alongside the stiffer front springs and anti-roll bars. In addition to the new EPAS calibration, Mustang Shelby GT350 and GT500 subframes and toe-link components contribute to the sharpest Mustang steering responses in Europe yet.

Distinctive, race-derived and aero-influenced styling has been a core component of every generation of Mustang Mach 1, enhanced with charismatic colour and decal combinations.
Customers of the latest limited-edition model have a choice of eight combinations for body colour and bold bonnet and side stripes, including Fighter Jet Grey with Satin Black/Reflective Orange stripes; Iconic Silver, Shadow Black and Oxford White with Satin Black/Red stripes, or Velocity Blue, Twister Orange, Race Red and Grabber Yellow with Satin Black/White stripes. Mustang Mach 1 upper and lower front grilles are finished in gloss black, and the iconic Mach 1 logo appears on the rear deck-lid and on each front wing.

“The Mach 1 not only looks the part but has the hardware to deliver on-track thrills and on-road driving pleasure that Mustang enthusiasts demand,” Tonn said. “It’s the most exciting Mustang in Europe to-date, and we are thrilled to be bringing the iconic Mach 1 name to Europe for the first time.”

First introduced in 1969, the Mustang Mach 1 extended the performance of the Mustang GT model with a number of enhancements including more powerful V8 engines, competition suspension and bespoke styling. The first-generation Mach 1 set 295 speed and endurance records at the Bonneville Salt Flats, and racing teams using the Mach 1 earned back-to-back SCCA Manufacturer’s Rally Championships in 1969 and 1970. New or updated versions were introduced in 1971, 1974, and 2003. More than 300,000 Mustang Mach 1 vehicles have been produced since 1969.