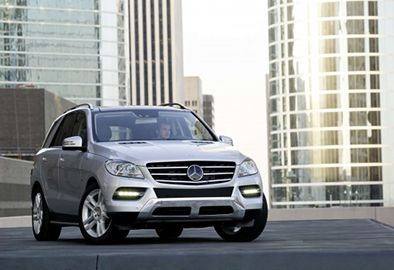 Mercedes-Benz has unveiled their new third-generation M-Class sports utility vehicle, first versions of which will arrive here in April/May of next year. Built in their plant in the United States, the new M-Class comes equipped with a host of improvements that Mercedes claims will set a new standard in the SUV segment.

From the outside, the new M-Class has been given a more defined, forceful appearance with the introduction of new headlamps and grille with a centrally mounted three-pointed star. Chrome surround bumper-mounted daytime running lights and the introduction of other glittering elements – including a deep, broad front/rear protective under guard – give the finished product an even more stylish, high quality look.

Offering the best of both worlds, the new M-Class links a strong off-road heritage to the comfort of a luxury premium saloon. Inside, the cabin has been made more spacious and comfortable, with more front/rear elbow room and vibration and acoustic control features. Visually, the most striking element is a new dashboard finished in aluminium and wood and a choice of upholstery. Driver comforts are well catered for with a raft of standard and optional high tech infotainment systems.

Equipped with permanent four-wheel drive and new 7-G Tronic seven-speed automatic transmission, the M-Class is powered by engines that work in harmony with weight reductions, low rolling resistance tyres, automatic stop/start function, improved air flow (Cd value 0.32) and friction-reducing technology that can return fuel stretching figures of up to 1,500kms from a single fill, depending on tank size.

High on its list of attributes is an all-new engine range (two diesel and one petrol) that delivers fuel economy some 25 percent better on average than the model it replaces.
In Ireland, the version most likely to appeal will be the new 204bhp ML250 CDI BlueTEC 4-MATIC. Powered by a 2.1-litre, four-cylinder turbo-diesel unit, it delivers power similar to its predecessor whilst consuming 28 percent less fuel (6-litres/ 100km) with lower CO2 emissions (158g/km). Top speed is 210km/h with a 0-100km/h time of 9secs.

A second diesel version – the new 3-litre, V6, 258bhp ML350 BlueTEC 4-MATIC – is equally frugal delivering a 24 percent reduction in consumption with lower emissions (179g/km) despite a 27bhp increase in power. Top speed is 224km/h and 0-100km/h is a faster 7.4secs.  The same is true of the new 3.5-litre, V6, 306bhp, ML350 BlueEFFICIENCY petrol version – a model that outperforms its predecessor in every way yet returns a 25 percent reduction in fuel consumption against a top speed of 235km/h and a 0-100km/h figure of 7secs.
Low emissions mean lower, less expensive road tax bills with the new 250 CDI having annual road tax of EUR447 and the 350 CDI coming in at EUR630.

A full suite of safety features includes a comprehensive range of airbags and warning systems, drowsiness-detection and tyre-pressure monitoring, adaptive brake lights, electronic brake assist and numerous other standard and optional items already familiar from the C, E and S-Class ranges. Amongst these are Pre and Post-Safe systems that significantly reduce the impact of an accident and help protect occupants from further impacts.

Because of the longer lead time to its arrival in Ireland, prices will not be announced until closer to its introduction. However, Mercedes-Benz sales manager in Ireland Ciaran Allen states that it will be priced to maintain what he calls ‘the brand’s competitive position’ in keeping with recent policy.

Describing the new M-Class as ‘an SUV with a social conscience’, Mr. Allen said “its fuel-saving features and low emissions will enhance its appeal amongst those seeking an on/off road vehicle that doesn’t hit the planet…or the pocket.’