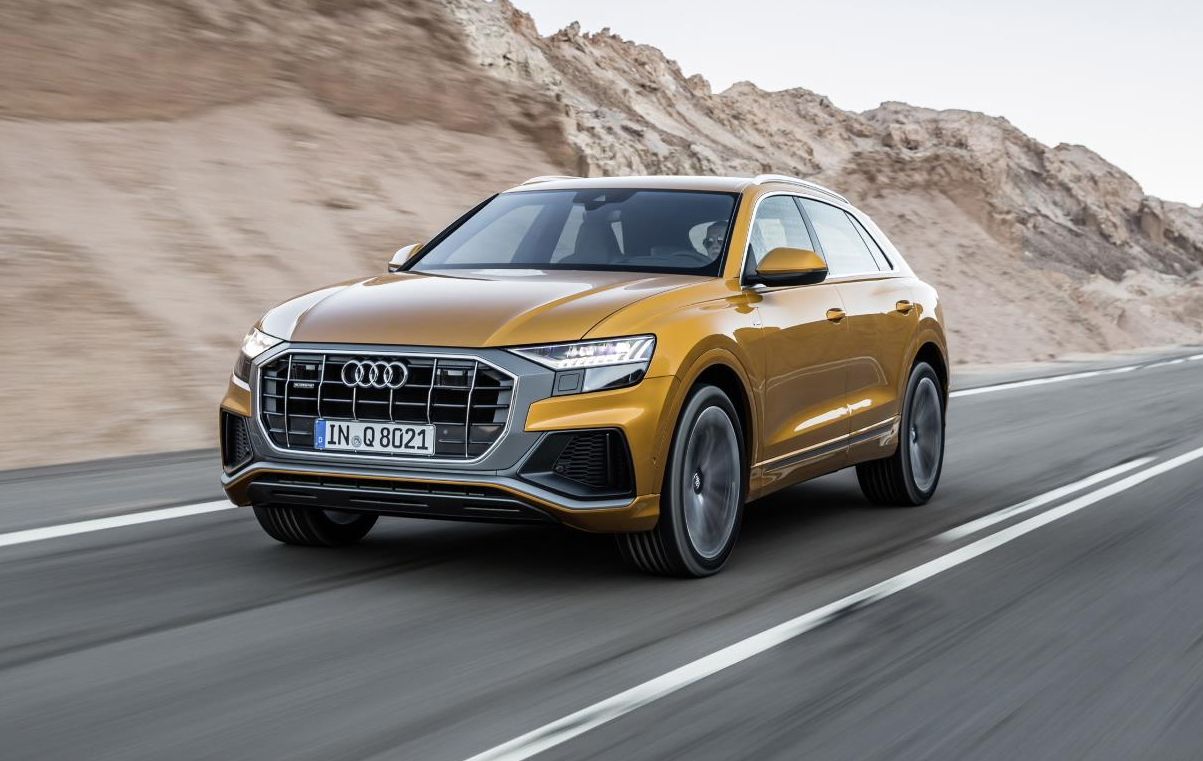 What a stunning looking new machine from Audi. This all new Q8 combines the best of both worlds: the elegance of a four-door luxury coupé with the practical versatility of a large SUV. Fully equipped, comprehensively connected and tough enough for off-road duty, the Audi Q8 is a confident companion for both business and leisure. The Audi Q8, which will feature S Line as standard, is set to launch in the Irish market in the third quarter of 2018. The Audi Q8 exudes sporty styling and upscale prestige like no other SUV from the premium car maker. At 4.9 metres long, 2 metres wide and 1.7 metres tall, the SUV coupé is wider, shorter and lower than its Q7 sister model. With a wheelbase of nearly 3 metres, it offers a spacious interior that beats off its direct competitors in most relevant dimensions, including interior length and headroom. There is a three-seat system in the rear which can be adjusted upon request. With the seatbacks folded down, the luggage compartment under the power rear hatch holds up to 1,755 litres.

With an imposing Singleframe grill in octagonal design, the Audi Q8’s brawny radiator grille stands upright. Together with the spoiler, highly contoured air inlets emphasize a self-confident look while an elegantly sloping roofline terminates in gently inclined D-pillars and rests against the quattro blisters above the wheel arches, which house up to 22-inch wheels. HD Matrix LED technology headlights, which come as standard for the Irish market, offer powerful illumination and add to the model’s striking presence on the road. Audi Q8 owners can use the myAudi app on their smartphone to activate various lighting functions and experience them from the outside.

All drive systems are particularly efficient thanks to the new mild hybrid technology (MHEV). The 48-volt primary electrical system incorporates two important technology modules: a lithium-ion battery and a belt alternator starter. While braking, it can recover up to 12 HP of energy and feed it back into the battery. The MHEV technology enables long coasting phases with the engine deactivated and a start-stop range that begins at 22 km/h. Besides the standard progressive steering, where in the steering ratio becomes increasingly direct the further the steering wheel is turned, Audi also offers the option of all-wheel steering. It can turn the rear wheels as much as 5 degrees – counter to the direction of the turn at low speeds to increase agility and at higher speeds in the direction of the turn for better stability.

Easy-to-understand symbols stand for the digital precision from Audi and for the high level of integration of architecture and operation. The central element is the top MMI touch response display. In the dark, the optional contour light traces the distinctive design lines of the interior and provides backlight for the three-dimensionally lasered quattro badge above the glove compartment – an example of the love of detail featured on all Audi models. Options including four-zone automatic air conditioning and the air quality package further enhance the elegant ambiance.

With the MMI touch response, nearly every function of the new Audi Q8 can be accessed via two large displays. The upper 10.1-inch display is used for controlling the infotainment and the navigation system while the 8.6-inch display below controls the heating and air conditioning as well as convenience functions and text input, the latter with his or her wrist resting comfortably and ergonomically on the selector lever. The natural language voice control turns the Audi Q8 into an intelligent dialog partner allowing drivers to input their commands freely. The head-up display also projects important information onto the windshield, including detailed lane guidance for navigation.

The new Audi Q8 comes standard with the top-of-the-line infotainment system, MMI navigation plus. It includes the Audi connect data transfer module with the LTE Advanced standard and a Wi-Fi hotspot. The navigation system recognizes the driver’s preferences based on previous journeys and therefore can make intelligent suggestions. The online services from Audi connect add predictive features to the route planning process. This lets the two Car-to-X services for traffic sign information and hazard information benefit from the swarm intelligence of the Audi fleet. Whether parking, in the city or on long journeys – the Audi Q8 supports its driver in many situations, through adaptive cruise assist, efficiency assist, crossing assist, lane change warning, curb warning and 360-degree cameras.

All details of the brand new Audi Q8 are available from www.audi.ie.