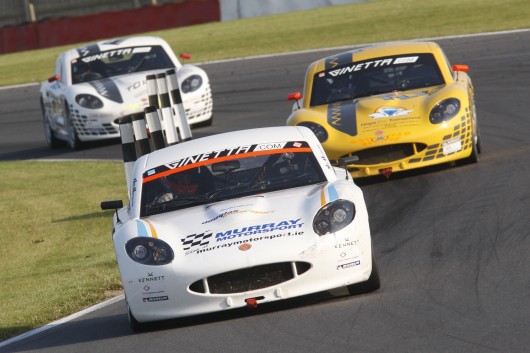 The 2012 Ginetta Junior Championship resumed after a seven week summer break at the Snetterton 300 circuit in Norfolk. Murray and his Douglas Motorsport team were keen to get back on track after the lengthy break and started their preparations for the weekend with some pre-event testing on the Wednesday before the event.

Struggling during the pre-event tests, Murray made some setup changes to his car before Saturday’s qualifying which paid dividends giving him a much better balance going into Sunday’s races. Niall lined up fifth on the grid for both races and despite not being fully happy with this result, he was still confident he could get a good result from there having done so in the past.

As the red lights went out on race one Niall got a superb start off the line to quickly move up the order before trying a move around the outside of Sennan Fielding and Ollie Chadwick at Brundle corner that just didn’t work out resulting in contact with Fielding spinning the pair off. Murray quickly got back onto the track and now in ninth began his recovery drive back up the order. With four of the six laps now complete Niall was back up to 4th with two laps remaining to close a two second deficit to Harry Woodhead up ahead in third. However Woodhead was now starting to battle with Douglas Motorsport teammate Andrew Watson for second. As they approached turn three, Woodhead tried an optimistic move around the outside which didn’t pay off and allowed Niall to capitalise and move up to third. Crossing the finish line Niall finished third just behind Watson to take the team’s first double podium of the season.

Once again Niall lined up fifth for race two, however this time he was brimming with confidence having come from as low as ninth in race one to finish third at the flag. Murray was superb off the line and got a great start to move up to third approaching the back straight. Now with a good tow from championship rival Charlie Robertson, approaching Brundle corner, Charlie was preparing a move on Fielding with Murray hoping to follow through. At the following Nelson Corner Robertson moved past Fielding up the inside however as Niall went to follow through, Sennan who clearly hadn’t seen how close Murray was turned in on his normal line only for the pair to make contact resulting in Fielding spinning off and Niall carrying some damage to his Kennett supported Ginetta for the remainder of the race. Now with a clear track ahead to reel in race leader Robertson. Niall put in a series of qualifying laps within 0.015 of a second of each other to try and catch the leader however his tyres were now starting to go off and the warm weather conditions were causing his engine to overheat. Murray found himself having to change at 6200rpm instead of his normal 7200rpm to try and cool the engine and was soon coming under pressure from a recovering Sennan Fielding who eventually got past him on the last lap. As the chequered flag dropped Murray brought his Murray Motorsport sponsored Ginetta G40 safely home to secure another podium in third and with it more all important championship points.

Speaking after the race, Murray reflected on what had been a good weekend overall, “I was a little disappointed after the pre-event testing and free practice sessions that we appeared to be struggling for pace. However I’m delighted that the work my Douglas Motorsport team put into the car paid off and we’ve come away with another double podium and more all important championship points. Once again thank you so much to all my sponsors for their support. Murray Motorsport, KENNETT, P1 Digital and of course my team Douglas Motorsport.”

Niall continues his title bid in Scotland at Knockhill in two weeks time for rounds 13 & 14 of the Ginetta Junior Championship.