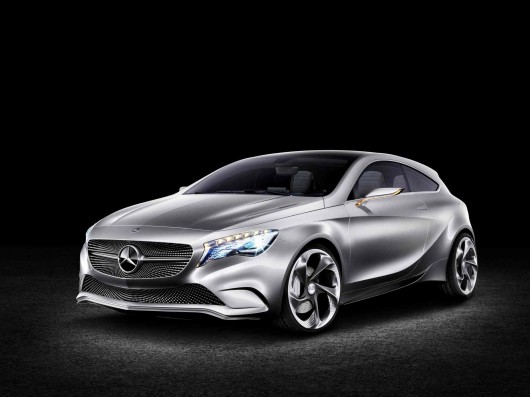 Over the next four years, Mercedes-Benz is to undertake an ambitious new model development programme the aim being to broaden its appeal and extend its reach into segments of the market in which it is not currently represented.

Ten completely new models are being introduced, none of which will have any direct predecessor. As a form of shorthand, Mercedes-Benz groups them under five broad headings – compact, mid-sized, full-sized, large-sized and large SUV. In the compact segment, the most significant development will see the introduction of a completely new A-Class – a completely new model which, other than name, will bear no resemblance whatsoever to the outgoing model. Described as a ‘the pulse of a new generation’, it will be built on an entirely new platform with front-wheel-drive and a new range of engines.

Revealed to the public under the working title Concept A-Class at the recent Shanghai Motor Show, the new A-Class is aggressively sporty in its design and interior appointments with features that echo some of its senior stable mates in the Mercedes-Benz range. It will go into production in the latter half of 2012 with first models scheduled to arrive here in early 2013. Derived from the new A-Class will be two additional new models, both constructed on the same platform. Carrying the model designation BLS, first of these will be a four-door coupe with body styling inspired by the larger CLS version. Naturally more compact, it too will be quipped with front-wheel-drive. Third new model based on the A-Class platform will be a 4-wheel drive premium compact SUV version expected here in 2014.

In the mid-size category, in which C-Class is the dominant player, two new models are planned while, in the full-size segment, one new model will be introduced alongside the popular E-Class range.

Moving to the top of their model offering, three additional models will take their place alongside the S-Class within the large-size segment while one additional model will join the M-Class in the large SUV segment. Taken as a whole, this new model offensive is seen by Mercedes-Benz as underlining their plan to grow market share and broaden their appeal beyond their traditional customer base. As one insider commented Mercedes-Benz is ‘taking the stiffeners out of their collar’ by designing cars that will attract a more youthful clientele. Within the past year, model development has continued apace with five new introductions – CLS, SLK and C-Class Coupé, Saloon and Estate variants – contributing to a 9 percent increase in sales worldwide. In 2012, the company expects to achieve record sales globally and to further its ambition to almost double output over the next eight years.

Here in Ireland, Mercedes-Benz is looking ahead to 2012 with optimism. Against the backdrop of what forecasters predict will be a declining market overall, Mercedes-Benz is targeting an improved market share from a current year level of 2.1 percent to a slightly increased 2.7 percent. Propelling this growth will be the introduction of three new models, all of which will arrive here during the first quarter. These are the all-new B-Class, available in January, and the new M-Class and all-new SL roadster – both arriving in March. In the case of the SL, its arrival will coincide with celebrations being held by Mercedes-Benz to mark 60 years of the SL roadster.

Commenting, their sales manager in Ireland, Ciaran Allen said that ‘buoyed by the most compelling model range and the most competitive prices ever in our history, we believe that Mercedes-Benz can take a positive view of the year ahead and, to that end, there will be no let up in our efforts to shape our model offering, maintain competitiveness and develop our dealer network.’