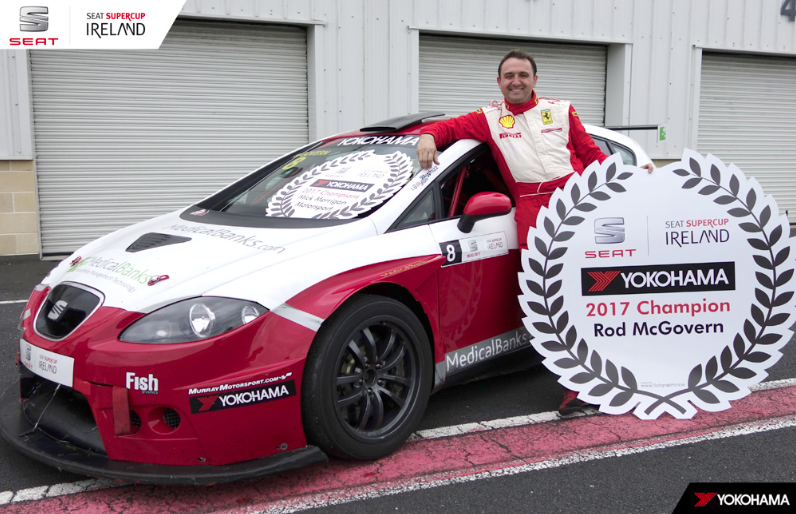 Rod McGovern is the new 2017 SEAT Supercup Ireland Champion. Having twice finished runner-up in the high pro le SEAT Leon Supercopa based championship since its 2015 introduction, the Mick Merrigan Motorsport driver finally clinched the title with a calculated drive in Round 10 at Kirkistown Motor Racing Circuit on Saturday (26th August). The penultimate stop on the 6 event/12 round calendar, McGovern travelled to the high speed County Down circuit with a healthy championship lead over a closing rookie sensation Sam Mansfield. While Race 1 would see a rare error from McGovern in what has been an otherwise perfect campaign from the Dublin driver, a more calculated approach to Race 2 would net a fourth place and the title. The 5-points P4 brought would be enough to put the title beyond the reach of Mansfield & back to back defending team champions Murray Motorsport no matter what the outcome of the season nale at Mondello Park on September 17th.

With the championship having gone down to the final weekend on the last two occasions, McGovern the main challenger to Niall Murray in 2015 and Erik Holstein last season, this year the MedicalBanks backed driver took control of the points table early on as his key rivals faltered. Opening the season with the bonus championship point for taking the Yokohama Pole Award at Round 1 in Mondello Park and converting that into victory, he would repeat that form at the next event in Bishopscourt and again at Rounds 5 & 6 back in Mondello. At the third race weekend he would also become the first double winner of the season with the Race 2 win on that occasion making him the championship’s most winning driver, overtaking the previous record of Niall Murray with his 7th SEAT Supercup race win. Mansfield would end his reign at the top of the qualifying taking his first pole position at Round 7 but McGovern would still take the Race 1 win to further extend his points lead ending the hopes of pre-season favourite Jonathan Fildes.

Finally delivering a much anticipated first SEAT win in Race 2, the inexperienced but clearly talented Mansfield became McGovern’s only title challenger as the championship entered into the Summer break. While Kirkistown presented a new challenge, the Murray Motorsport driver having never raced there before, that didn’t faze Mansfield as he looked to force the championship to go to the season concluding Leinster Trophy meeting. In qualifying, a returning Eoin Murray claimed the Yokohama Pole Award on the last lap denying McGovern who had to settle for P2 with Mansfield lining up 4th. Race 1 and things looked to turn in Mansfield’s favour on the opening lap as an error from McGovern caused him to spin out on his own and hit the banking forcing him to pit twice during the race for attention. While he would take the chequered flag, he would not complete 75% of the distance of race winner Murray in order to be eligible for championship points. An opportunity for Mansfield to make inroads into the points leader, unfortunately he could not capitalise. His title hopes would be dashed when he was forced to take to the grass through Debtors corner after coming upon a slower car. Doing well to stay in control of his Leon he would nish a frustrating 4th.

With the draw to determine the grid for the second race resulting in the Top 4 from Race 1 lining up in reverse order, putting Mansfield on pole, McGovern started 5th knowing what he needed to do after getting strict instructions from veteran team owner Mick Merrigan to take no risks. Catching up to third placed Barry English with his team nervously watching on from the pitwall he would shadow the Round 2 winner until the flag, 4th the magical result he needed to finnally lift the title of the championship he instigated. English joked afterwards, “I’m not sure he would have finished behind me if the championship situation was different’. Up front Mansfield took his second win ahead of the vastly experienced SEAT Eurocup racer Murray, a feat that resulted in the Finnstown Castle Hotel backed driver being selected as the 500 Motor Racing Club of Ireland ‘Driver of the Day’. With both McGovern and Mansfield both already committed to the 2018 SEAT Supercup Ireland, the stage is set for an exciting championship. 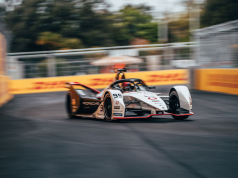