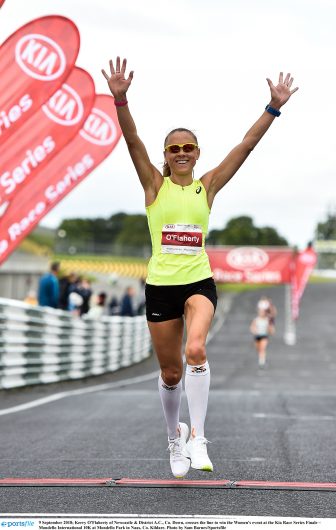 The Inaugural Kia Race Series which brought together seven well-established regional races around Ireland under one umbrella, has been a great success, with participation in the individual events up 29% on average on last year’s entries. New standards were achieved with, eight course records broken, and €4,000 worth of bonus fund paid to athletes. D.S.D’s Hiko Tonosa claimed five records while Kerry O’Flaherty (Newcastle & District) broke three records.

In yesterday’s race the men’s field was very competitive with Hiko Tonosa (DSD) first across the line in 30.17 DSD, followed by Raheny teammates, Kevin Dooney in 30.31 and Mick Clohisey in 30.38.  In the women’s field Kerry O ‘Flaherty Newcastle AC win her fifth race of the series crossing the line in 34.35, with Laura O’Shaughnessy of DSD finishing second in 35.46 and Ciara Wilson (DMP) third in 37.41.

The winner of the mixed team prize of €1000, sponsored by Kia was A Micks Bag; Mick Clohisey, Hiko Tonosa, Laura O’ Shaughnessy and Kerry O’Flaherty. A ‘Rose of Tralee’ relay team competed on the day as the Rose of Tralee 2018; Kirsten Mate Maher teamed up with the Dublin Rose and two Rose of Tralee escorts.

O’Flaherty was the female winner of the series and a new Kia Ceed: “I was delighted to win the Kia Race Series and to win five out of the five that I raced in and to make the top of the podium in the finale. I took a week after Berlin (European Championships) and I kept myself ticking over for this last race in the series. I had to grind out the win, conditions were tough, and Laura is so strong on hills, so I had to work hard to pull away from her on the last lap.” She added: “It was a great idea by Pop Up Races to organise the series and to have Kia on-board is fantastic.”

Tonosa was the overall male winner but unfortunately did not meet the criteria of winning the Kia Ceed (as he does not hold a full valid Irish driving licence). The DSD athlete received a cash prize and has been welcomed as an ambassador for the Kia Race Series 2019.

Second place Eric Keogh from Donore Harriers who performed consistently throughout the series was next in line and a worthy winner of the new Kia Ceed. Speaking about his win Keogh said: “I’ve been really consistent through-out the Kia Race Series, and I’m delighted to walk win a new Kia Ceed, it’s not every day that happens! It’s been a great initiative by Pop Up Races, everybody’s been a winner, numbers have been up for the club races in the series, PB’s have been run by athletes and course records broken.” 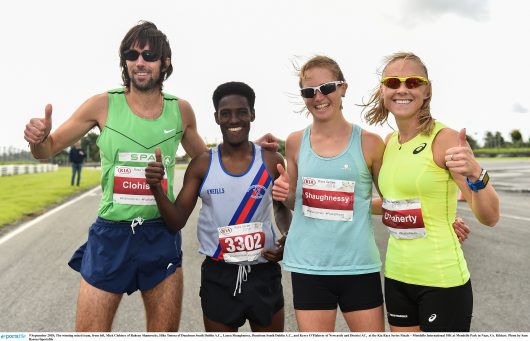