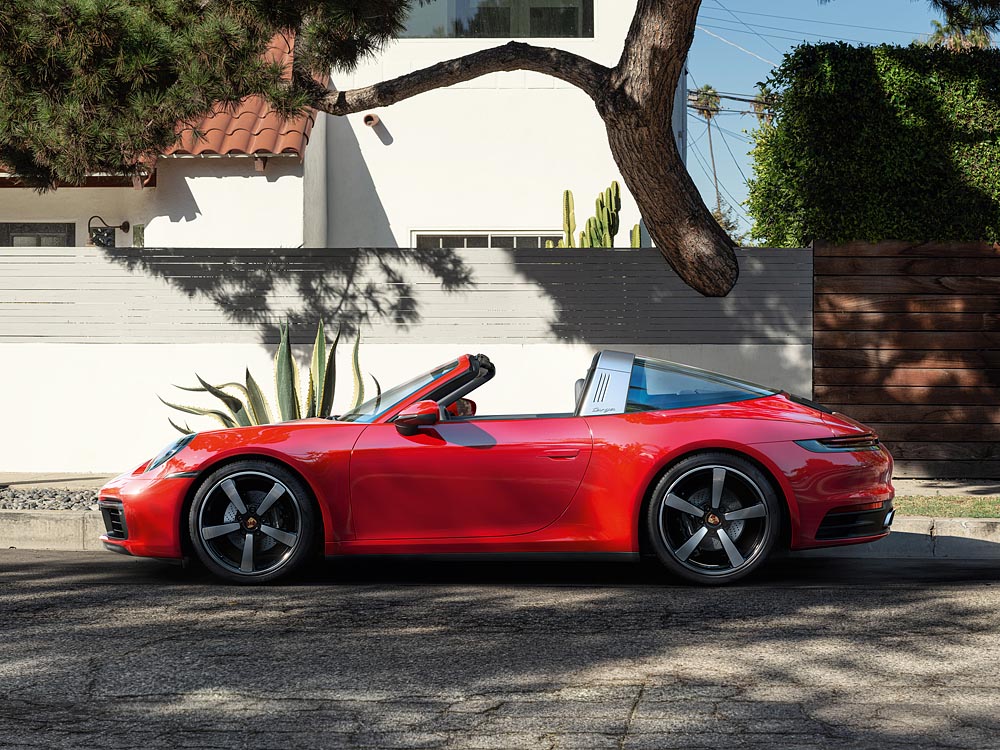 The distinguishing feature of the new Porsche 911 Targa, that is announced today, remains its innovative roof system that combines the sleek appearance of a coupe with the indulgence of open-topped motoring when desired. Enthusiasts will recognise in the latest 911 Targa stylish design cues from the legendary 1965 original, such as the characteristic wide bar in place of the B-pillars aft of the doors, a movable roof section above the front seats and a wraparound rear window – with no C-pillar. Unlike the classic models, however, on the new 911 Targa the roof can be comfortably opened and closed in just 19 seconds. Pioneered in the prior generation model, when the button is pressed the fully-automatic system stows the roof top behind the rear seats, providing a choreographed kinematic spectacle in the process.

Both models feature an eight-speed dual-clutch transmission (PDK) and intelligent Porsche Traction Management (PTM) all-wheel drive is standard on each 911 Targa to deliver confident dynamic performance in all weathers and road conditions. As a no-cost option, and to further amplify the pure driving experience of the open-roof style, the 911 Targa 4S can be ordered with the new seven-speed manual gearbox, with which the Sport Chrono package is combined. The exterior of the 911 Targa is characterised by the design elements of its ‘Type 992’ model generation. Compared to the prior model, the familiar 911 silhouette has evolved and the nose features more pronounced front wheel arches incorporating rounded, LED headlights and the bonnet has a distinctive recess evoking the design of the earliest 911 generations. A variably extending rear spoiler and integrated light bar brings further distinction to the tail. With the exception of the front and rear sections, the entire outer skin is aluminium.

The interior of the Targa echoes the 911 Carrera models and is characterised by the clear, straight-lined design language of its dashboard and recessed instruments. The 911 models from the 1970s provided the inspiration here. Alongside the central rev counter – very much a defining feature for Porsche – two thin, frameless freeform displays extend information to the driver. A compact switch unit with five buttons for direct access to important vehicle functions is located below the 10.9-inch centre screen of the Porsche Communication Management (PCM) with online navigation. Unveiled at the IAA Frankfurt Show in 1965, the first 911 Targa 2.0 was a trailblazer for a whole new type of car. Originally marketed as a “safety cabriolet with anti-roll bar” – primarily in response to increased safety legislation in America – the Targa, with its detachable roof, soon established itself as an independent concept and indeed became a style icon. Right to the present day, Porsche has continued to combine two worlds in the 911 Targa: open-top driving in a cabriolet paired with the sleek convenience of a coupé. The name ‘Targa’ comes from the famous Targa Florio race and since the mid-sixties has been synonymous with the Porsche open driving concept.

Production of the vehicle began towards the end of 1966 with the market launch of the 911 Targa taking place in 1967. This roof concept was enhanced from one 911 generation to the next. During this time, the Targa acquired the status of a stand-alone model in the Porsche range, becoming the choice for one in ten 911 buyers. For the 1996 model year, Porsche presented a fully revised version of the 911 Targa (‘Type 993’). The entire roof was made of glass, with an electric sliding glass cover above the driver and front seat passenger that could be lowered and retracted beneath the hinged rear glass window. Precisely 20 years after the last 911 Targa with the classic roll-over bar style (based on the ‘Type 964’) was discontinued, the ‘Type 991’ 911 generation in 2014 was the first to introduce the innovative, integrated folding powered roof mechanism. Now, the latest ‘Type 992‘ further refines this concept to bring the 911 Targa story right up to date.

The enhanced performance of the all-wheel drive goes hand-in-hand with further development of the front-axle drive. As previously introduced on the 911 Carrera 4 and Carrera 4S models, the clutch and differential unit is now water-cooled and has reinforced clutch discs for greater robustness and a higher load capacity. The increased actuating torque at the clutch improves its adjustment accuracy and the function of the additional front-axle drive. Overall, the enhanced front-axle drive with PTM (Porsche Traction Management) contributes to even better all-wheel traction in all road conditions. The 911 Targa 4 rides on 19-inch alloy wheels with 235/40 ZR tyres on the front axle and 295/35 ZR tyres on 20-inch wheels on the rear axle. As standard, the 4S model is fitted with 245/35 ZR tyres on its 20-inch front wheels and 305/30 ZR tyres on its 21-inch rears. On the Targa 4, braking performance is delivered by 330-millimetre diameter discs with black four-piston monobloc fixed calipers. The red-painted brake calipers on the Targa 4S have six pistons at the front axle, four at the rear while its discs measure 350 mm front and rear. The Porsche Ceramic Composite Brake (PCCB) can be ordered as an option.

The electronically controlled variable damping system PASM (Porsche Active Suspension Management) is part of the standard equipment on the 911 Targa. This system automatically adjusts the damping characteristics in terms of driving comfort and handling to each driving situation and has two manually adjustable maps, Normal and Sport. Porsche Torque Vectoring Plus (PTV Plus), which includes an electronic rear differential lock with fully variable torque distribution, is standard for the Targa 4S, and available as an option on the Targa 4. When the manual transmission is specified on the S model, variable torque distribution on the rear wheels via controlled braking interventions is delivered by Porsche Torque Vectoring (PTV) in combination with a mechanical rear limited slip differential.

Like the other eighth generation Porsche 911 variants, the Targa models are also equipped with Porsche Wet mode as standard. Sensors fitted in the front wheel housings are capable of detecting water on the road surface and, if significant volumes of water are picked up, a signal in the cockpit provides a recommendation for the driver to manually switch to Wet mode. The vehicle drive systems are then adapted to the conditions to guarantee maximum driving stability. New technology has also been integrated to extend the range of features and, for the first time, Porsche InnoDrive, which includes adaptive cruise control, is available on the 911 Targa. The enhanced Smartlift function enables ground clearance to be programmed, so the front ride height can be raised. The list of options is supplemented by an extensive range from Porsche Tequipment and new personalisation options from Porsche Exclusive Manufaktur.

Porsche will further extend the combination of traditional style elements, timeless design and cutting-edge technology in a special edition of the 911 Targa, which will make its debut this month. 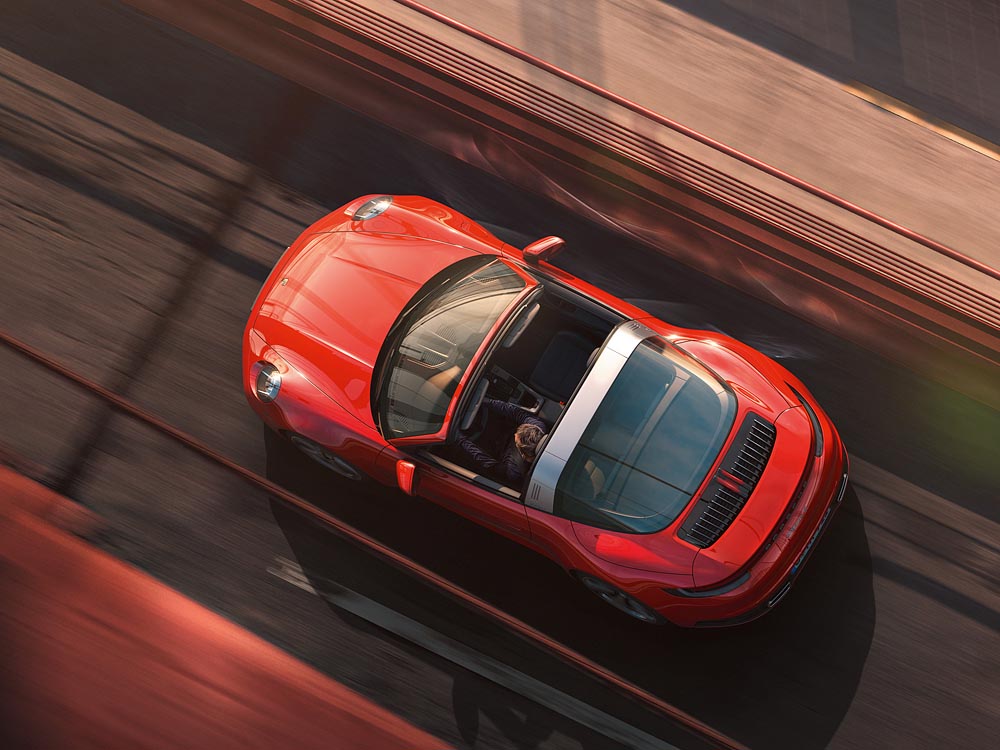 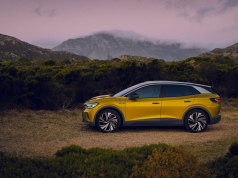 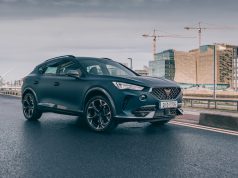