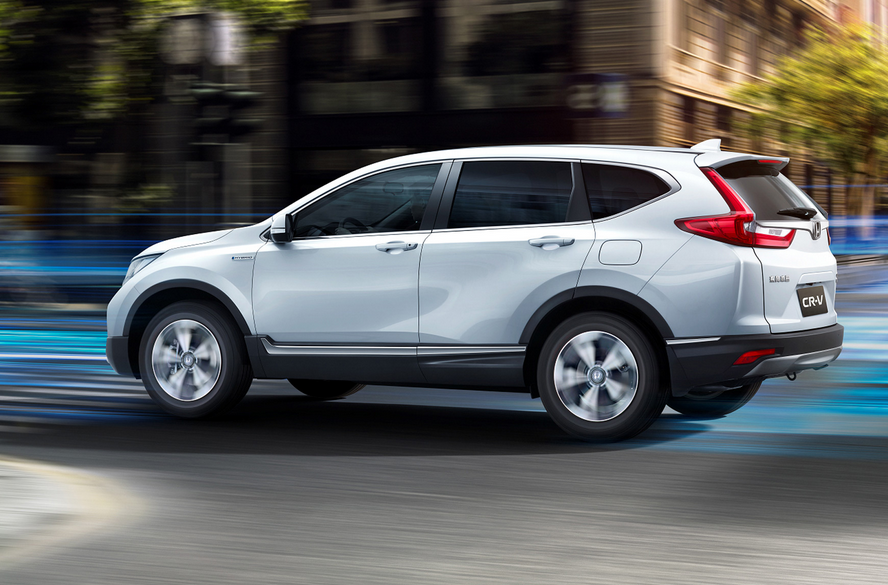 In a first for a Honda SUV in Europe, the all-new CR-V will be available with advanced hybrid powertrain technology. The world’s favourite SUV will be arriving into Irish showrooms in early 2019 and will be available from €39,500*. The Honda Hybrid Performance system features intelligent Multi-Mode Drive (i-MMD) technology comprising two electric motors, an Atkinson-cycle petrol engine and an innovative direct transmission delivering high levels of efficiency and refinement.

The CR-V Hybrid is equipped with an efficient 2.0-litre i-VTEC petrol engine, a powerful electric motor and a lithium ion battery pack. The maximum output is 184 PS (135 kW) with torque of 315 Nm. Honda has confirmed official fuel economy and CO2 emissions for the all-new CR-V Hybrid. Under the combined cycle of the revised NEDC test, the front-wheel drive model of the 184 PS (135 kW) petrol-electric SUV has achieved CO2 emissions of 120g/km and official average (combined) fuel economy of 5.3l/100km (53.3mpg). The all-wheel drive CR-V Hybrid variant has CO2 emissions of 126g/km and average (combined) fuel economy of 5.5 l/100km (51.4 mpg).

Rather than using a conventional transmission, a single fixed-gear ratio creates a direct connection between moving components, resulting in a smoother transfer of torque. This format means Honda’s system is more refined than a planetary e-CVT typically found in other hybrid vehicles.

Honda’s unique i-MMD technology is so-named as it intelligently and automatically switches seamlessly between three driving modes to provide the highest possible efficiency. These modes comprise:

In most urban driving situations, the CR-V Hybrid will automatically transition between Hybrid Drive and EV Drive for optimum efficiency. In Hybrid Drive, excess power from the petrol engine can also be diverted to recharge the battery via the generator motor. The Engine Drive mode is the most efficient set-up for high-speed highway cruising.

At a moderate cruise, the CR-V Hybrid will typically run in EV Drive for more than half of the time, whilst at faster speeds, the car will be in EV Drive for approximately one third of the time. The control software of the i-MMD system will constantly decide when to shuffle between these modes to maximise efficiency dependent on the situation and environment, without input from the driver.

Engineers on the CR-V Hybrid programme have worked hard to ensure that the transfer between power sources – including the engine stop-start function when stationary – is virtually imperceptible to the occupants. The smooth transfer of torque means there is no driveline shunt or undesirable feedback through the pedals or steering wheel, and the near-silent powertrain means the CR-V Hybrid boasts outstanding quietness.

The i-MMD system has been tuned to provide a linear feel through acceleration, with optimised calibration between throttle input and powertrain response, to ensure the engine noise matches the driver’s expectations.

Honda’s new CR-V Hybrid has a unique Vehicle Driver Information Interface (DII) screen that displays the current drive status and allows the driver to understand how the energy sources combine to power the vehicle. The readout shows the lithium-ion battery charge, a graphic of the current power flow, and the recharging status of the system.

John Saunders Sales and Marketing Director for Universal Honda Ltd. said today “This is really exciting time for Honda as the arrival of the CR-V Hybrid marks the beginning of Hondas commitment to an electric future in Europe with a specific aim to have electrified powertrains in two thirds of European cars sold by 2025. We are delighted to be introducing this highly anticipated hybrid powertrain into our Honda network nationwide and for our customers to experience the seamless and engaging driving experience combining sporty performance with high economy and low emissions. We firmly believe the all new CR-V Hybrid will be a “Real-World” alternative for Diesel in the large SUV segment”.