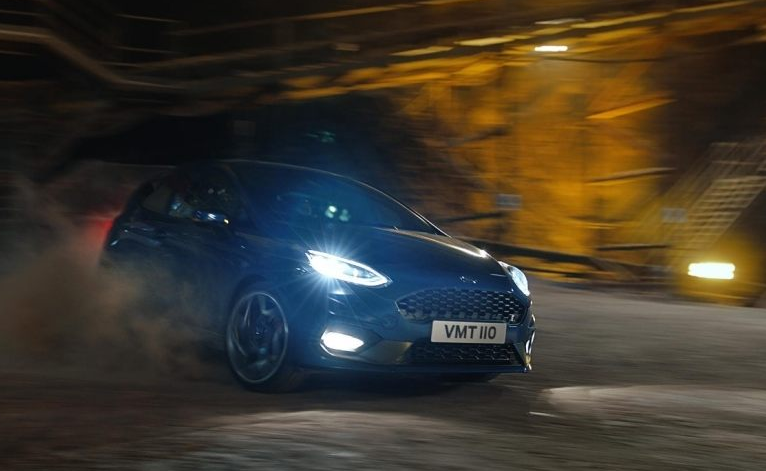 The performance prowess of the new Ford Fiesta ST is demonstrated by a new film that features an amazing driving location – 400 metres below ground in one of Europe’s largest salt mines. Shot at a secret location with World Rally Championship driver Elfyn Evans at the wheel, the Fiesta ST is seen slipping, sliding and jumping in the dirt. The sound of the 200PS 1.5-litre EcoBoost engine is amplified by its surroundings as it tackles a high-speed drop through the narrow entrance tunnel.

“The salt is actually like fine gravel to drive on, quite slippery to be honest, especially on road tyres,” said Evans. “You expect it to be claustrophobic but actually it’s quite the opposite, a great place to really enjoy the new Fiesta ST.”

Ford’s Europe’s Greatest Driving Roads series has put a range of Ford performance vehicles – including the Ford GT, the Ford Focus RS and the Ford Mustang Convertible in some of the most stunning environments across the continent – from the Arctic Circle in Norway, to the sunny climes of Mallorca. So far, all the locations have been above ground.

Ford chose the secret salt mine location for new TV advert ‘Undertrack’ that sees the car put through its paces within the mine’s 60-kilometre network of tunnels, where temperatures are a constant 16 C and safety precautions required that a skeleton crew was used for the three-day shoot amid strict safety precautions.

Watch our clip of the Fiesta ST in the mine: https://youtu.be/tI6xLRwr_hA

“The drama of the tunnels and the chance to show off Fiesta ST’s ability on a different type of surface were a big part of choosing this unique location,” said Leo Roeks, Ford Performance director. “It wasn’t a typical race track, it was somewhere we could drive this great car to its full potential.”