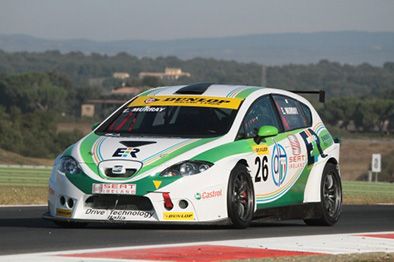 Eoin Murray, one of Ireland’s most well known motoring personalities and SEAT brand ambassador, took to the track on Saturday 17th and Sunday 18th September in the first of a two-part race programme in the Italian Seat Supercopa series driving for Drive Technology Italia at Vallelunga “Piero Taruffi”. The Autodromo Vallelunga is located a few kilometres from Rome, and is 4.08.kilometers in length.

Competing in free practice on Friday, Eoin and his team struggled initially with pace as they were forced to run with used tyres, which were not ideal for the conditions. However on Saturday in the qualifying races, Eoin immediately set the benchmark for the other drivers and held pole position until the final moments of Qualifying One. Later in the afternoon Eoin set pole position for Qualifying Two, which placed him to start in 2nd position overall for the first race.

Race One started well with Eoin placed in 2nd position for most of the 50 minute race. In the last 15 minutes problems began to occur when Eoin’s tyres started to overheat leading to reduced grip on the track. As Eoin struggled for pace, he drifted back to 4th place with approximately seven minutes to go, where he ultimately finished.

With the top eight finishers of Race One reversed for Race Two, Eoin started in 5th place and held this position for the opening laps of the race. While following the leading group for the first 20 minutes the SEAT driver began to struggle with an overheating engine resulting in a loss of power. Eoin took an early pit stop to find some clear track and allowed his engine to cool. Eoin’s pace quickly increased, which saw him move to third position where he would ultimately finish, always gaining on the leaders and finishing just two seconds behind the second place driver. This was a fantastic achievement for his first race in the Italian series considering the challenge of the gruelling 50 minute long race, compared to the shorter races Eoin is accustomed to. This successful weekend is something he hopes to build on for the final race at Monza, outside Milan on the 15th and 16th October. Monza is one of the oldest and most famous GP circuits in Formula 1.

Commenting on the weekend, Eoin said, “I’m really happy with how the weekend went and delighted with the podium finish.  Race One was difficult as we did not find a good setup for the car over a long distance race and Race Two was particularly tough due to the engine overheating problems but I was happy with my pace and the success for the team.  All in all it was a very positive weekend, the first time with the team and we seemed to gel well together. I’m looking forward to Monza for the final race of the season and hope for a good result there also.”

Eoin Murray also drives a SEAT Leon CUPRA R when he is off the track.  The SEAT Leon Cupra R takes an already progressively designed car, the SEAT Leon and merges it with the truly unique racing spirit that SEAT is known for so is the perfect car for Eoin to drive when he is not racing. Built by the same hands that prepare the SEAT Leon race cars for world league competitions like the WTCC, the SEAT Leon CUPRA is fitted with a 2.0 TSI 265 bhp engine, which fulfils the EU5 emission standard, and is ready to soar at a heart-stopping 247 km/h.