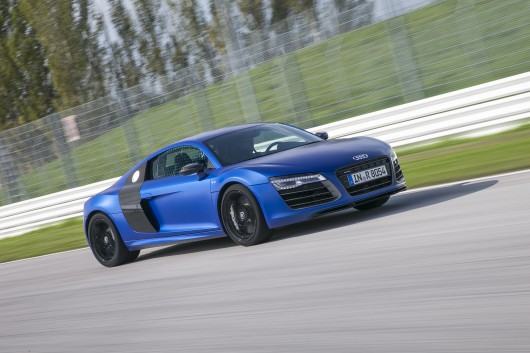 Audi has launched its new series of its high-performance two-seater sports car, the Audi R8. The V8 and V10 models have received a gentle facelift both externally and internally. Their engines have been optimised for increased fuel efficiency as has their chassis’s, which benefit from an aluminium spaceframe, weighing only 210kg for the coupé and 216kg for the Spider. Audi has also introduced a new, lighter, faster variant of the R8 V10 named the R8 plus, it’s a more focused version of the V10 Coupé, yet not as extreme as the R8 GT, which has ceased its limited production run.

The R8 has received a mild makeover on its exterior with the addition of new all-LED headlights, whch are now standard fitment on all models. The rear of the car features all-new dynamic indicators, these led lights light in the direction of the signal, the oval exhaust outlets have been replaced by larger circular ones which are integrated into the car’s rear bumper. The R8’s interior remains for the most part unchanged over its predecessor, it offers a premium feel for both drivers and passengers, with a multitude of personalisation options to tailor the car’s interior to each individual’s taste. 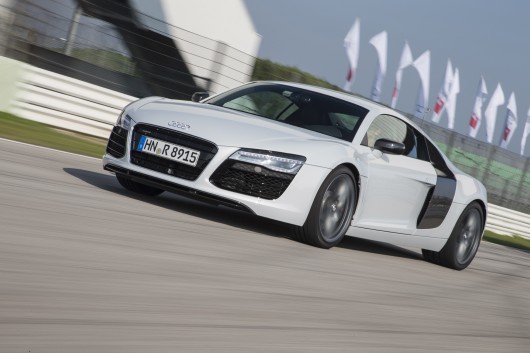 It seems somewhat of an injustice to call the 4.2-litre V8 powered R8, the entry-level car, however that’s what it is within the R8 range. It produces 430hp and 430 Nm of torque, coupled with a harmonious V8 sound track. We drove all three variants of the R8 around some twisty mountainous roads surrounding Missano race circuit in Riminni, Italy. On damp leaf-strewn roads, the R8 displayed impeccable road manners, instilling confidence in the driver. The front-end grip on turn-in is impressive, even when pushed hard into a corner the R8 provides surefooted grip encouraging you to take the next corner slightly quicker. The new wave design brakes, which are standard fitment on the V8 and V10 models perform flawlessly in all road conditions, with a progressive feel from the brake pedal. Despite having 430hp the V8 R8 doesn’t respond to accelerator inputs with such instant responses as its V10 sibling, it has copious amounts of power but it’s only readily accessible from 5,500rpm upwards.

Comparing the V8 and V10 R8’s on paper doesn’t lead you to believe just how far apart the two cars are in the real world. The 5.2-litre V10 engine produces a vigorous 525hp and 530Nm of torque. We drove this model equipped with the new seven-speed S tronic transmission, when Sport mode is selected the acceleration is blisteringly fast, with instant response felt from inputs to the throttle and steering. At high revs there’s a glorious soundtrack emitted from the V10 masterpiece, mid-mounted behind the driver and passenger. The characteristics of this engine encourage you to rev out each gear, with maximum torque on offer at 6,500rpm, it will happily continue to increase revs to 8,700rpm. The S tronic adds to the aural experience with auto blips on the downshifts becoming addictive after spending some time on the road. The V10’s soundtrack was all the more enjoyable as we were driving the Spyder convertible model. Its chassis is just six kilograms heavier than the Coupé variant. You can retract the electro hydraulically operated cloth roof at speeds up to 50km/h, taking just 19 seconds to fully open or close. I generally wouldn’t lean towards convertibles, always opting for the more rigid coupes, conversely this R8 Spyder has given me a different perspective on soft-tops. In the V10’s case you have the distinct advantage of listening to the engine note with the roof retracted, you’ve also the option the lower the rear glass window with the roof fully closed, increasing the engine noise level into the cabin. 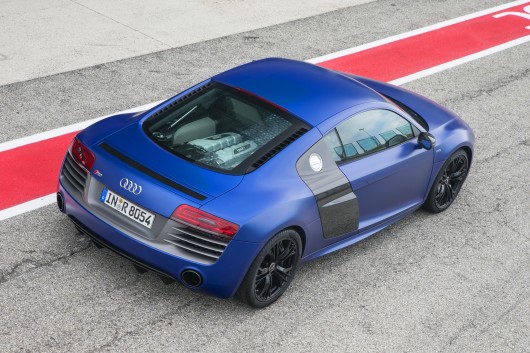 Just like its smaller V8 sibling, the V10 handled the Italian countryside with ease, albeit at a blistering pace. Out test car was equipped with Audi magnetic ride, it’s an adaptive damping system that adjusts the responses of the shock absorbers from the simple press of a button on the centre console. This system proved its worth across rough uneven roads where comfort can still be achieved inside the cabin, it also improved the car’s handling in the wet offering a softer suspension setup. Audi’s magnetic ride is now standard fitment on the V10 models, which also now come equipped with navigation system plus and a Bang & Olufsen Sound System, although once you experience the V10’s soundtrack there’s little requirement for any sound system.

For those motorists looking for a more focused R8, Audi has introduced a new model, the R8 plus. It utilises the same 5.2-litre V10 engine as the regular V10 model, but has been remapped to increase power to 550hp and 540Nm of torque. This results in a 0 to 100km/h time of just 3.5 seconds. The R8’s power is fed to all four wheels via Audi’s quattro permanent all-wheel drive, with a rear-biased power distribution. In reality the R8 across all models drives and feels like a rear-wheel-drive car and if provoked will happily induce oversteer on demand. The R8 Plus features a multitude of carbon fibre reinforced plastic (CFRP) parts, these include CFRP sideblades and engine cover. The standard fitment carbon-ceramic brake discs save 12 kilograms and along with the CFRP body parts contribute to a 50 kilogram weight saving over the regular V10 Coupé. It’s easily recognisable with its matt blue paint finish and carbon exterior trim additions.

We drove the new Audi R8 plus around the fast but twisty Missano race circuit and also on the surrounding roads. The benefits of the R8 plus’s lightweight and stiff setup can be experienced on track, where it demonstrates its appeal. On track, the carbon-ceramic brakes (standard fitment) offer tear-jerking, late-braking capability, despite the wet weather conditions after a few laps you can brake later then you think you need to for each corner. Whilst the brakes are superior on track and suitable for any R8 plus owner that intends on partaking in a number of track days, for road use we preferred the ‘wave’ steel brake discs which offer more feel through the pedal. The R8 plus doesn’t have the magnetic ride suspension, instead utilising a setup similar to the hardcore R8 GT. It’s tuned more for track then road and on the same mountain roads that we drove the standard V10 with magnetic ride suspension the plus was twitchy on uneven surfaces, whilst also becoming increasingly uncomfortable on a long journey. 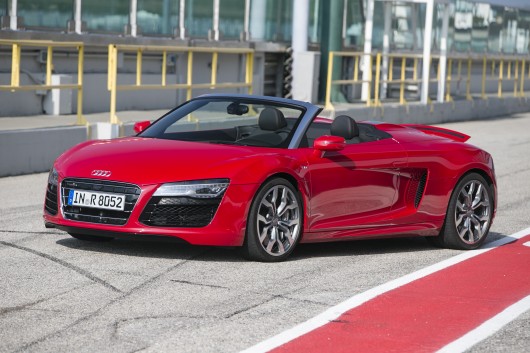 Whilst we thoroughly enjoyed the focused R8 plus, after driving all three variants, our preferred choice would be the V10 Coupé, complete with some choice additional equipment including sports seats, suede trimmed steering wheel and alcantara headlining to enhance the sports car feeling. The R8 is definitely a supercar capable of taking on the Porsche 911 Turbo and Lamborghini Gallardo, and in the case of the later far more user-friendly. If you’re fortunate enough to afford one, you’re in for real treat, enjoy.

This new Audi R8 will arrive in Ireland this December, Audi Ireland has reduced the price from its predecessor, and will announce its price in just a few days.