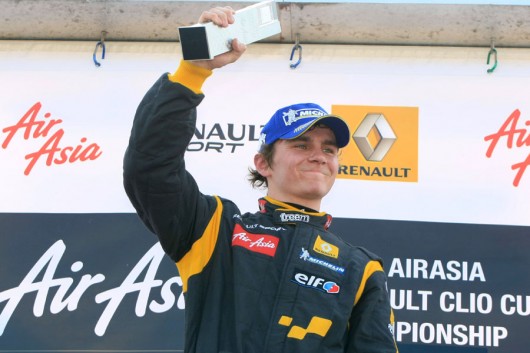 21 year old Aron Smith from Rathfarnham, Dublin has been crowned Motorsport Ireland’s Young Racing Driver of the Year for 2011. The €50,000 award comes on the back of Aron’s successful year competing in the RenaultSport UK Clio Championship. Having won a handful of races during the season Aron brought the title chase down to the last race of the season in Brands Hatch. Unfortunately he missed out on the title but arrived home in a very close 2nd.

This year also saw Aron make his BTCC debut, with a great run in Knockhill for the Triple Eight Engineering Team. This has added to the rumor that we will see the young Irish man on the grid in the 2012 British Touring Car Championship.

Congratulations to Aron from all at Rev.ie, no doubt he’ll be one to watch for the future.