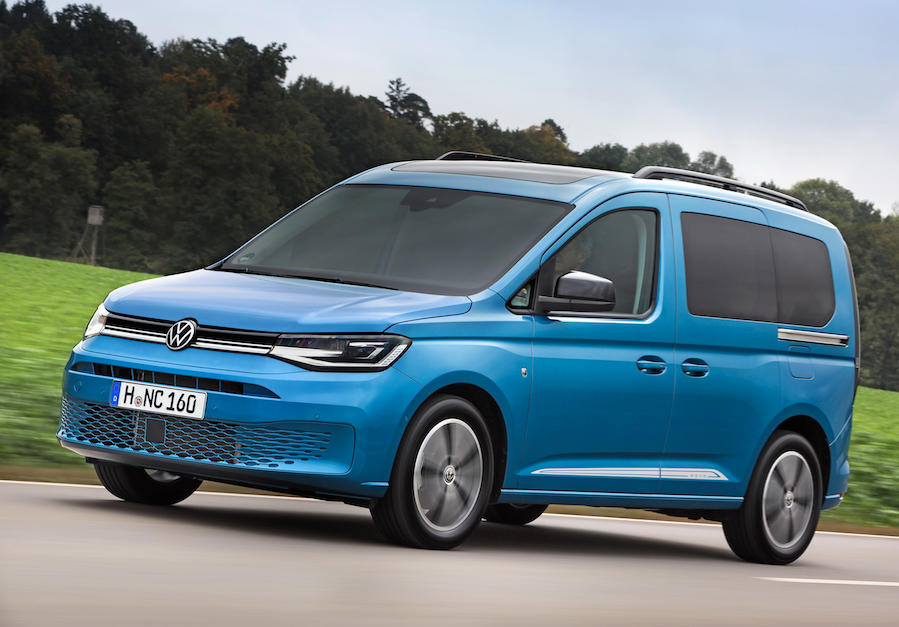 Volkswagen Commercial Vehicles is bringing the new Caddy onto the market. The fifth generation of the highly successful model, of which over three million units have been produced, is launching as a Kombi and family MPV, a city delivery van and a camper). For the first time, the all-rounder is based on the modular transverse matrix (MQB), as used in the Golf 8. With the latest evolution of the MQB, numerous new technologies make their entry into the Caddy range: Innovative assist systems such as Travel Assist and the new oncoming vehicle braking when turning function make driving the Caddy easier and safer; connected infotainment systems and digitalised controls make the Caddy a smart phone on wheels; and the new twin dosing system turns the efficient turbo diesel engines’ NOx emissions into water and harmless nitrogen. The exterior has a new and charismatic design; the interior too has been cleverly planned down to the very last detail. At the same time, the space offered by this new multitool among the compact vans, MPVs and campers is increasing – a genuine Volkswagen.

From launch it will immediately be possible to configure the new Caddy as a Kombi or MPV in the new ‘Kombi’, ‘Caddy’, ‘Life’, ‘Style’ and‚ ‘Move’ (launch model) specifications and as a city delivery van in the ‘Cargo’ and ‘Cargo Maxi’ (long wheelbase) versions. The launch begins at the end of November in Germany, Austria and Poland. This is followed by all other European countries, and in a third step by export markets such as Israel, South Africa and Australia. From 2021, in good time for the next holiday season, the also completely redesigned Caddy California (the successor as a camper to the Caddy Beach; for the first time with mini kitchen, panoramic sunroof and new tent as options) will further extend the spectrum of the model line. Depending on the version, Volkswagen Commercial Vehicles will also offer the fifth generation Caddy with 4MOTION all-wheel drive parallel to front-wheel drive from spring 2021; this also applies to the Caddy California. Also to be launched in 2021 as a 4MOTION highlight and successor to the Caddy Alltrack is the new stand-alone Caddy PanAmericana – an MPV/SUV crossover aimed at all globetrotters. The Maxi versions of the Caddy (Kombi and MPV) and Caddy California also follow next year. 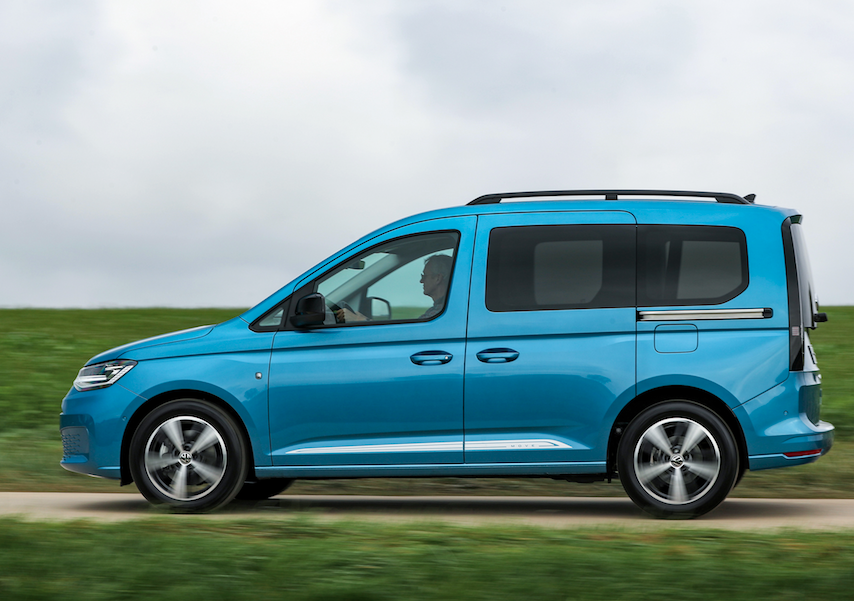 Visually the switch to the MQB platform is at once already evident from the longer wheelbase. Increased from 2,682 to 2,755 mm, it gives the new Caddy proportions with a more dynamic look. The designers utilised the technical opportunity presented by the platform to create a completely redesigned vehicle body – one that is more charismatic than ever. In terms of engineering and specification, the exterior of the up to seven-seater Caddy has a number of new features. These include a particularly large panoramic sunroof with a transparent area of 1.4 m2 (also available for the Caddy California) and optional electric closing aids for the sliding doors and rear hatch. Also new: 16-, 17- and for the first time 18-inch alloy wheels and – fitted as standard in the top ‘Style’ version – new LED headlights and LED rear lights. Included for the first time is the ‘Keyless Access’ locking and ignition system. With the top ‘Keyless Access / Advanced’ version all the Caddy user needs to do is approach the vehicle with the key in their pocket so that, if they want it to, the central locking unlocks without them even touching the door handle. The newly developed system is protected by ground-breaking technology, making it extremely secure.

On the inside the fifth generation Caddy impresses with new high-tech solutions and appreciably more usable space. The Caddy Cargo provides 3.1 m3 of cargo space (as defined by the SAE V6 standard); in the Caddy Cargo Maxi the capacity is 3.7 m3. A completely redesigned rear axle enhances the space provided. This becomes clear by taking the Caddy Cargo as an example: a Euro pallet can now be loaded sideways into the back of the vehicle. That’s because the maximum width between the wheel housings now measures 1,230 mm. Thanks to the sliding doors having been increased in width to over 840 mm (previously 701 mm), the new Caddy Cargo Maxi can now take a second Euro pallet – a major competitive advantage. The maximum cargo space length up to the bulkhead is 1,797 mm (Cargo) and 2,150 mm (Cargo Maxi). 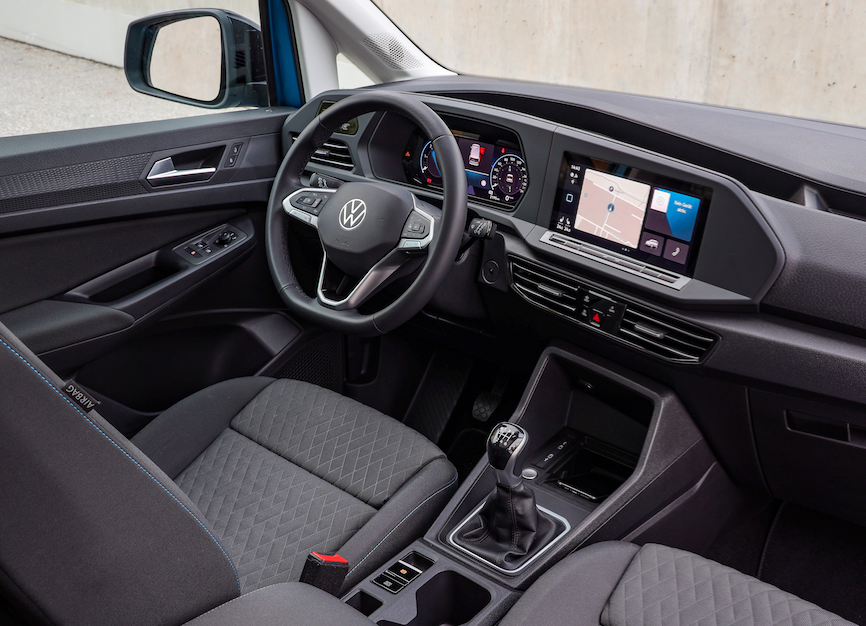 The passenger car and Kombi versions are offered as standard with five seats. Whether short or long, they can also optionally be ordered, like the previous model, with a third seating row. These two additional individual seats in the back quickly turn the Caddy into a seven-seater. A new feature is that the seats on the third row can be individually removed, thus offering maximum flexibility. Naturally, the latest Caddy also retains tried and tested features: the passenger car and Kombi seats on rows two and three can, for example, still be tipped forward and folded up. And the second-row seats can, of course, again be easily taken out. The Kombi and family MPV provide luggage space of up to 2,556 litres (loaded roof-high up to the first seating row, second row taken out); with five people on board the luggage space, loaded up to the height of the seat backs, is an impressive 1,213 litres. The cargo space length of the Kombi and MPV is 1,913 mm up to the first row of seats; a maximum width of 1,185 mm is available between the wheel housings.

The indicator and control elements have been redesigned: the initial interface here with the driver and front-seat passenger is formed either by analogue instruments with a digital multifunction display or – as an option, and standard in the ‘Style’ version – by the new ‘Digital Cockpit’ (fully digital instruments). Included as standard or optional depending on version: radio and navigation systems with 6.5-inch (16.51 cm), 8.25-inch (20.96 cm) or 10.0-inch touchscreens. The fusion of Digital Cockpit and top 10-inch Discover Pro navigation system creates here a new digital landscape of indicators and controls: the ‘Innovision Cockpit’. Via an Online Connectivity Unit (OCU) with integrated eSIM the Caddy’s infotainment systems also access mobile online services (MOD). The innovative air-conditioning controls under the infotainment system are for the first time also digital, featuring easy-to-use sliders.

Also new in the Caddy are digital buttons for light, sight, audio and menu functions. The rotary switch for the lights has therefore served its time – the front panel of ‘Light & Sight’ buttons now takes over its role. Positioned on the left, it is integrated with the cockpit and infotainment system on one line of sight and control. So-called direct access buttons on another panel below the central infotainment system and air-conditioning controls also enable quick and intuitive operation of the assist systems and advanced climate control and parking functions. In addition, new, powerful, touch-control LED interior lights and a power supply for external 230V devices enhance life on board. Another innovative feature is a roof vent for better climate control in the back of the Caddy. 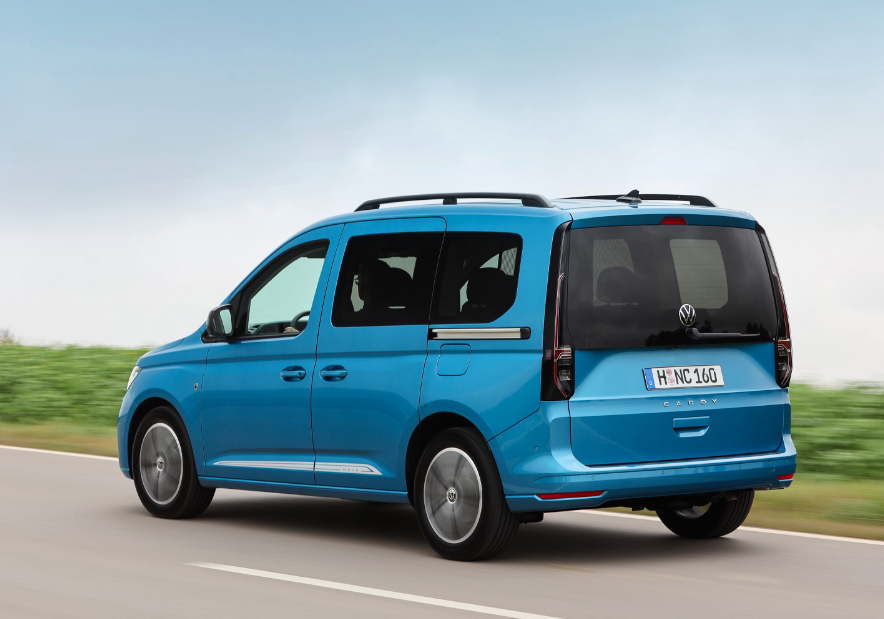 Five of the 19 assist systems are completely new in the Caddy and the others have been extensively updated and extended by various functions: the new features include Travel Assist, which, for the first time in a Volkswagen commercial vehicle, facilitates assisted driving across the full speed range. In connection with Travel Assist the Caddy’s redesigned multifunction steering wheel is equipped with capacitive sensors. The background to this is that for legal and safety reasons the driver must permanently monitor the system. The wheel’s capacitive sensors ensure precise detection of even a lightly touching hand, thus avoiding any false alarms. In other words, for as long as one hand is touching the steering wheel, the system gives no prompts to steer. Also new: the oncoming vehicle braking when turning function fitted as standard in every Caddy, which as part of the Front Assist system can help to avoid accidents when turning off across possible oncoming traffic. Likewise new in the Caddy and thus for the first time in the ‘A’ segment of city delivery vans: the trailer manoeuvring assistant familiar from the Crafter, Trailer Assist (which makes reversing with a trailer easier).

Twin dosing significantly reduces the TDI engines’ nitrogen oxide emissions
Like the assist systems, the Caddy’s new four-cylinder engines are also innovative. They are from the next stage of engine evolution and are all fitted with particulate filters. For example, the turbo diesel (TDI) engines: for the first time in a Volkswagen commercial vehicle the new ‘Twin dosing’ system is being used for the 55 kW (75 PS), 75 kW (102 PS) and 90 kW (122 PS) TDI engines with 6-speed manual transmission or automated 7-speed dual-clutch gearbox. Via two SCR catalytic converters and a double injection of AdBlue achieved in this way, the system significantly reduces the nitrogen oxide (NOx) emission levels compared to those of the previous model. The TDI engines of the Caddy are thus among the cleanest turbo diesel engines in the world.

Likewise efficient and sustainable: a turbocharged petrol engine (TSI) delivering 84 kW (114 PS). Also set to follow are a turbocharged natural gas engine (based on the TSI, but delivering 96 kW / 130 PS) and a plug-in hybrid drive system (eHybrid). The new drive system technologies have a noticeably positive impact both ecologically and economically. For example, the TDI: the combined NEDC fuel consumption of the new generation Caddy 2.0 TDI with 6-speed manual transmission and power output of 75 kW (102 PS) is 4.7 l/100 km, 1.4 l/100 km less than the comparable engine in the now discontinued fourth generation Caddy. One of the factors that contributes to this significantly improved efficiency is the aerodynamics of the new exterior design: the cw value (previous model: 0.33) has been reduced to 0.30 on the new Caddy – a new benchmark in this segment. In comparison with its competitors too, the new Caddy is on average ten per cent more fuel efficient on the road, i.e. it also emits ten per cent less CO2. Also the Caddy versions with petrol engines will be ‘best in class’. 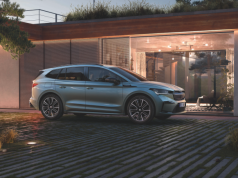