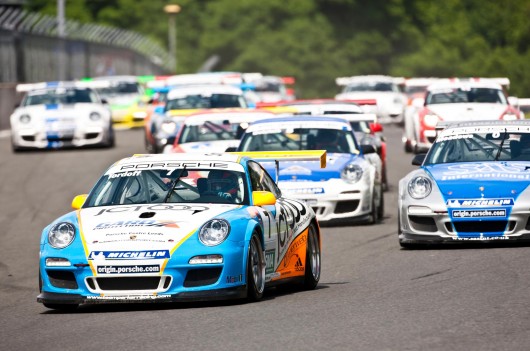 Under blistering sunshine atOultonParkinCheshireon Sunday, Sam Tordoff and Michael Meadows came out on top with wins in round seven and eight respectively of the 2012 Porsche Carrera Cup GB Championship . Tordoff, the Yorkshireman drove a great race whilst under pressure to win round seven of the championship, his first win in the Porsche Carrera Cup Great Britain Championship. Sam was followed home by Michael Meadows in second place, with Jonas Gelzinis rounding off the top three. Victor Jimenez was the proud victor in the Pro-Am1 category ahead of Derek Pierce and Ahmad Al Harthy. Whilst the Pro-Am2 category was won by Will Goff with Tautvydas Barstys coming second. Commenting after the race Sam Tordoff said, “I got a great start and Michael never really got close enough to mount a serious challenge. I had that bit of a cushion, but it was pressure all the way.” 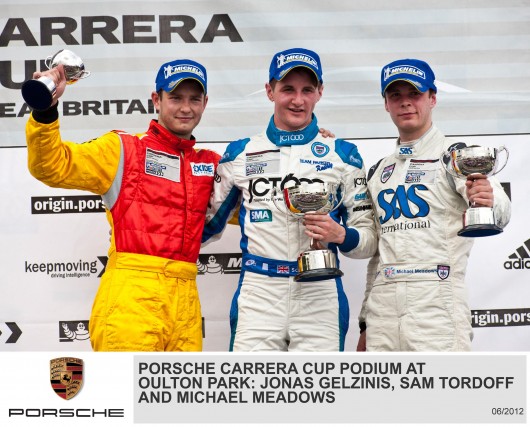 It was to be Meadows race for round eight, claiming his fifth win from eight races so far this season. Meadows finished the race ahead of Gelzinis in second from round seven victor Tordoff in third place. It was an action-packed race with several cars spinning off track in the early stages, from coolant which leaked out of Irish driver Michael Leonard’s car. Glynn Geddie was also to suffer radiator problems and he also leaked coolant on an already slippery track which caused Meadows to have a moment across the grass at Knickerbrook. Commenting after the race Meadows said, “The coolant caused havoc, but it worked in my favour. On one lap I ended up bouncing across the grass, but luckily Jonas did the same thing.”  Oly Mortimer was to lead home the Pro-Am1 category from Ahmad Al Harthy and Derek Pierce. Pro-Am2 had just one finisher in round eight, Will Goff. The 2012 Porsche Carrera Cup GB Championship heads to Croft inNorth Yorkshirenext, for rounds nine and ten on June 23/24.