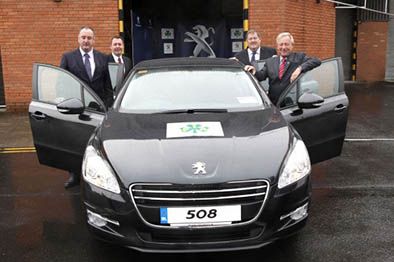 Peugeot and the Irish Farmers’ Association are proud to announce a new partnership, to be launched at the occasion of the 80th National Ploughing Championships, Athy, 20th September. To celebrate the new venture, the IFA is launching a Peugeot 508 giveaway, to the value of €24,850, at the Ploughing Championships, details of which can be sought at both the IFA and the Peugeot stand.

The IFA / Peugeot partnership will bring into fruition many motoring benefits to IFA Members, of which there are currently 87,000 in Ireland. Effective from 1st November 2011, IFA Members will enjoy excellent value service offers from Peugeot and will be eligible to join the IFA Peugeot Service Club, offering every fourth service for free. A €250 rebate will be paid to IFA Members on new Peugeot vehicle registration.

George Harbourne, Peugeot Managing Director said, “Peugeot has a very natural affiliation with Ireland’s farming community and the IFA thanks to our strong diesel heritage. We are very excited about this partnership and we very much look forward to working with the IFA in the coming years to make sure it is a success for Peugeot Ireland, The IFA and IFA Members.”

John Bryan, President of the Irish Farmers’ Association said, “IFA is delighted to announce this partnership with Peugeot. We are committed to delivering the best range of deals through our Member Services division, and the tie-up with Peugeot will bring added benefits to the existing package. I expect there will be strong interest at Ploughing, given the superb prize on offer.”

Full details of Member benefits and how to claim these benefits, along with the details of the Peugeot 508 competition will be published in the IFA’s new Members’ Handbook in October. Pictured from left to right are: John Bryan, President of the Irish Farmers’ Association, Des Cannon, Peugeot Sales & Marketing Director, JJ Kavanagh, IFA National Treasurer and George Harbourne, Peugeot Managing Director.