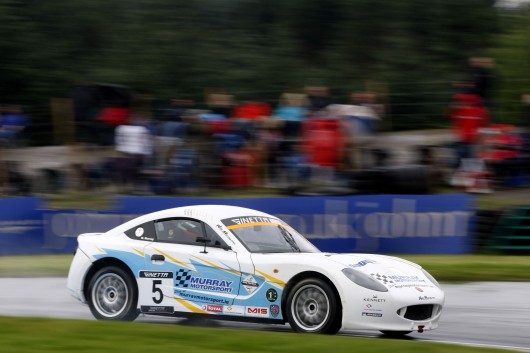 With the Ginetta Junior Championship now well under way having resumed after the summer break at Snetterton some two weeks previous, teams and drivers made the long trip to Scotland’s Knockhill Race Track for rounds 13 and 14 of the championship. Coming from a double podium finish in Snetterton, Niall Murray now knew that more of the same was required including a race win to keep his championship challenge alive, but more importantly move into the series lead.

Friday’s first practice session greeted drivers with cloudy and damp/drying track conditions with Murray and Watson deciding to risk running on slicks with a very different setup. The pair ended up learning a lot about the cars although the times were very slow. The next session was Murray’s first time driving on a dry Knockhill race track on slicks and was instantly one of the quickest setting the fastest time. Saturday morning would see Niall continuing his success at the top of the time sheets setting a lap time of 1.00.09. As the day went on the clouds opened and the typical Knockhill rain arrived just as Murray headed to the paddock assembly area for qualifying. The team changed the tyres and the limited setup they could do to get Niall out for the 15 minute qualifying session. Murray struggled to get the balance he needed to set the optimum lap to grab pole and on the last lap made a mistake at the chicane and lost 0.3 of a second and finished up in fourth place for race one, 0.2 of a second off pole position and third for race two.

As race one was being held on Saturday afternoon, track conditions were very similar to that of the morning’s qualifying session. Murray and his Douglas Motorsport team didn’t adjust the setup they had from qualifying as their pace was good. However Niall was really struggling for rear end grip throughout the race at every corner. Despite this Murray had managed to get himself into third and was driving as carefully but as quickly as possible to ensure he held his position but was also quick enough to keep it. Unfortunately on lap ten Harry Woodhead who had been putting Niall under increasing pressure as the race went on found a way past demoting Niall to fourth. As the chequered flag dropped Murray crossed the line fourth but importantly managed to grab an important handful of championship points despite struggling with an ill-handling car.

Sunday afternoon’s race two was met with clear skies and a dry track. Niall now starting from third on the grid was confident in his dry weather pace and hopeful that he could challenge for victory. Not wasting time Niall got a great start off the line to follow championship rivals Charlie Robertson and Sennan Fielding through the first sequence of corners. On the opening lap coming through the chicane Sennan Fielding got his car out of shape exiting the corner resulting in him spinning right in front of Murray and severely holding him up. Despite this Niall was now promoted to second place, with a gap of nearly 3 seconds to race leader Robertson. The timing screens began to tell their own story as Murray started to set multiple fastest laps including smashing the lap record as he chased down the race leader. However on lap nine Niall found his limit running slightly wide leaving the chicane meaning the young Dublin driver would now have to settle for second. Murray crossed the finish line in second and with it the fastest lap of the race, good enough to earn him the new class lap record at the Scottish venue. Team mate Andrew Watson followed Niall home in third for another double podium finish for Douglas Motorsport this season.

Speaking after the race, Niall commented on what was a weekend of mixed fortunes, “the weekend didn’t start the best for us as I made a big mistake in qualifying costing me my first pole position in the series. In race one I had to drive a careful race as the back of the car was like a MkII Escort, wanting to step out at a moments notice! However I was confident in my dry weather pace and luckily we got the conditions we needed in race two to almost take my fifth win of the year but another small mistake forced me to take second. Now just four points off the lead in the championship we need to start picking up wins again however I’m confident that this shouldn’t be a problem as the next three circuits in the championship were my strongest last year. Once again I’d like to take this opportunity to thank my sponsors without whom I wouldn’t be here, Murray Motorsport, KENNETT, P1 Digital, Ginetta and of course my team Douglas Motorsport who’ve been doing a superb job this season.”

Niall now has just under a month’s break before visiting his team’s home circuit Rockingham for rounds 15 & 16 of the Ginetta Junior Championship.