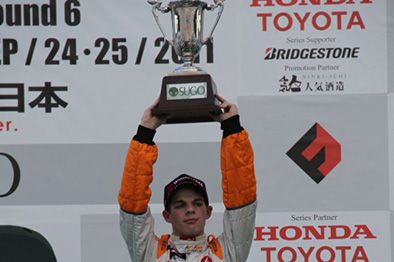 Gary Thompson brought the curtain down on his Japanese Formula 3 season with another National Class podium finish at Sportsland Sugo last weekend before experiencing a day of frustration and bad luck on Sunday.

The up-and-coming Irish racer had high hopes for one of his best events of the year before travelling to the fast and flowing Sugo circuit. Qualifying suggested just as much, even if a small mistake on his final run left him fifth in a top six covered by a meagre 0.2 seconds.

Fortunately Thompson’s lightning fast starts have become something of a speciality this season and he was once again quick to react when the lights went out for race one on Saturday, vaulting from fifth to challenging for second by the first corner. Although unable to make the move stick, he slotted cleanly into third from where he kept the leaders honest throughout at a circuit short on overtaking opportunities.

But, in a weekend that perhaps characterised his season as a whole, the 19-year-old endured a day to forget less than 24 hours later.

Sunday morning’s race once again witnessed another of Thompson’s stellar getaways, this time the Aviation Display and Cebu Pacific Air-backed Dubliner making second his own before being blocked by an accident ahead. Having lost a position in the confusion, and keen to quickly make amends, a slight mistake was all it took to pitch the car into retirement.

At least the final race of the weekend would offer Gary an opportunity to end his season on a high note, especially after qualifying third courtesy of his best lap in race one. Frustratingly though his race would ultimately start from the pit-lane after the car’s starter motor failed en route to the grid, leaving Thompson to finish sixth.

Gary Thompson: “I’m happy to have added another podium to my tally for the year but overall it wasn’t the weekend I’d hoped for. Once again our strong pace has gone unrewarded and I’m obviously gutted about what happened in race two. I don’t make many mistakes like that – it was a result of just pushing too hard to make up for losing the place gained at the start. Now it’s a case of going away over the winter, working hard and coming back recharged. Finally, I’d like to thank the SGC by KCMG team and my sponsors for all their efforts throughout 2011.”