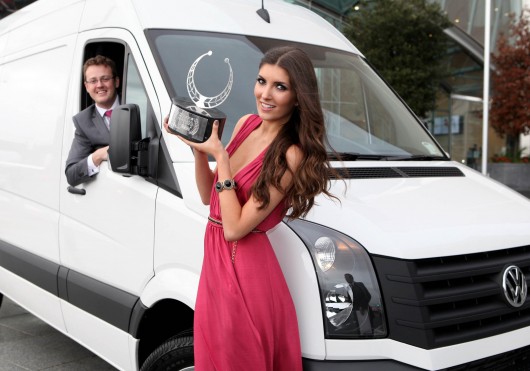 The Volkswagen Crafter has been voted Continental Irish Van of the Year 2012 by the Irish Motoring Writers Association (IMWA). The announcement was made at an awards ceremony at the Convention Centre Dublin attended by leading figures from the motor industry. The Crafter, with 44 points, finished ahead of the Fiat Ducato EU5 on 38 points and the Fiat Doblo Workup on 29 points.

In determining the result, all nine voting members of the Irish Motoring Writers Association van jury cast their votes. Value-for-money, reliability, versatility and lasting residual value were among the attributes sought by the judging panel.

Presenting the award to Niall Phillips of Volkswagen Commercial Vehicles Ireland, Paddy Murphy of award sponsors, Continental Tyres Ireland, commented: ‘The VW Crafter is a worthy winner of the Irish Van of the Year title, ideally suited to the needs of Ireland’s commercial vehicle operators. In the current tough market conditions for commercial vehicles, we are sure that the award will contribute in no small way to the ongoing success of the Crafter