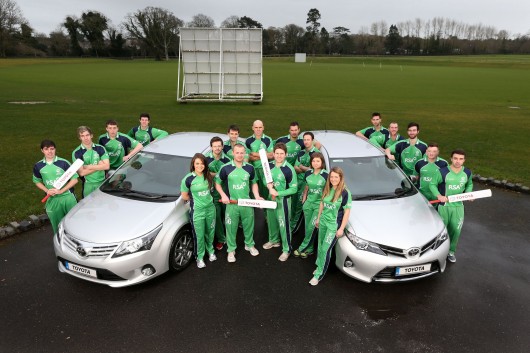 Toyota Ireland has signed a new three year deal as the official car sponsor to Cricket Ireland. Toyota will provide a fleet of vehicles to Cricket Ireland, including the new Avensis and Auris. Commenting on the announcement, Ian Corbett, Marketing Operations Manager for Toyota Ireland said, “We, at Toyota Ireland, are delighted to announce this sponsorship with Cricket Ireland.  Cricket Ireland has emerged as a top class professional sporting organisation.  Its strategic plan to 2015 is ambitious and focused and we look forward to supporting their efforts to grow and strengthen the game in Ireland.  Our aim is to support cricket at elite level in Ireland’s drive towards qualification to future World Cups but also at grassroots where the cricket development programme is increasing participation in the sport right across Ireland.”

The Irish cricket team are currently ranked 10th in the world in T20 cricket. They are ranked No. 11 in 50 over cricket and the Irish Women’s team are ranked No. 10. There are currently over 34,000 actively participating in cricket in Ireland with in the region of 140 Cricket Clubs and over 900 Senior and Junior teams in all of Ireland.