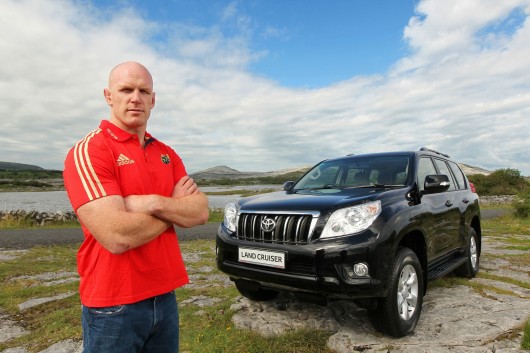 Toyota Ireland has extended its association with Munster and Ireland rugby star Paul O’Connell until 2015. Paul has opted for the new generation Land Cruiser as his car of choice. Commenting on the announcement, Ian Corbett, Marketing Operations Manager for Toyota Ireland said: “Paul has been a fantastic ambassador for Toyota since we kicked off our collaboration in 2010. As a former captain of Munster, Ireland and Lions rugby squads he has achieved legendary status in the game, and we are proud to continue our relationship with him as he represents Toyota Ireland in a vehicle which itself has achieved legendary status as the world’s best-selling four wheel drive – the Land Cruiser.” Paul also commented, “I’ve really enjoyed working with Toyota over the past two years and look forward to our continued relationship. As a recognised sports professional representing my country, it’s very important to pick the right brands to work with and you don’t get much better than Ireland’s number 1 car brand. I am a big fan of the Toyota Land Cruiser. It’s the perfect car for me in so many ways – it’s very spacious, looks great and performs equally well in the wilds of the countryside as it does in the city.”