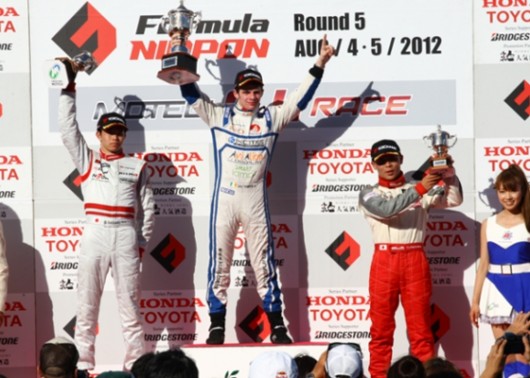 Japanese F3 front-runner Gary Thompson stormed to victory this weekend, in scorching conditions on his return to the 2.983 mile Motegi circuit in the Japanese Formula Three Championship.

The Aviation Display and Cebu Pacific Air backed Dubliner, returned to the venue where he sealed his maiden victory in the championship just a year ago, to display astounding determination as he sealed SGC by KCMG’s first victory of the season.

Starting from fourth position on the grid, Thompson got off the line well to lead the pack of aspiring single-seater racer’s as they charged into the first corner.

A hard-charging Thompson got down to business, pulling out a small lead in his TOM’s powered Dallara F307 National Class car before coming under increased pressure on lap five as his tyres started to wear in the heat.

Showing brilliant determination, Thompson was able to fend off NDDP Racing championship counterpart Sasaki, for the majority of the race before briefly losing the lead at the end of the penultimate lap, before making a daring move at the same corner to retake the top spot.

“I’m absolutely delighted to get my first win of the year,” explained Thompson.“We’ve made astounding progress since testing on Friday which shows how incredibly hard everyone at KCMG is working, it’s great that all of this work has paid off.”

In Sunday’s race, starting from third on the grid Thompson again took the battle to his competitors moving up into P2, and was looking good to hunt down the leader when Thompson got hit from behind and pushed off the racetrack. Undeterred, the young Irishman rose to the challenge and turned in a combative drive to recover to P3 and another spot on the podium.