SGC by KCMG’s Gary Thompson maintained his strong form of late to secure the teams fifth podium finish of the year as the Japanese Formula Three Championship visited Okayama for the fifth time in the history of the championship.

In his newly upgraded Toyota powered Dallara, Thompson immediately impressed in qualifying, snatching two third position grid slots for both races of the weekend at the circuit famous for hosting the Pacific Grand Prix in the mid 1990’s. 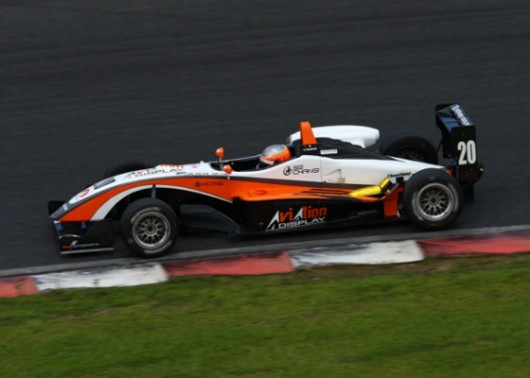 After earning his first victory of the season in Motegi, Thompson proved to be hungry for more, starting well to propel himself off the line and into second position during the opening exchanges of the race.

Any chance of competing for victory soon slipped away from Thompson, as an issue with the throttle body caused the component to partially stick open intermittingly, causing a brief off for the young Irishman backed by Aviation Display and Cebu Pacific Air.

Despite his woes, Thompson recovered well and was able to bring his F3 machinery home in third position to secure SGC by KCMG’s fifth podium of 2012.

Feeling a significant improvement in the performance of his car over the duration of the weekend, Thompson remained in the hunt for second position in the final race of the weekend, but dropped to eighth position as he took drastic measures to avoid the spinning car of Richard Bradley at Turn one. Thompson would fight back to complete the race in fifth position.

“We had a good weekend,” explained Thompson. “We made a lot of progress and the team all worked very hard for us to be third in qualifying with the possibility for pole had it not been for traffic on my best laps in both sessions.”

“I got off to good starts and was challenging for second in both races. We had very good pace, I think that if it wasn’t for Richard’s spin ahead in Race two, we could have finished in second for sure.”

The Japanese Formula Three Championship will resume action for the sixth round of the year at Sportsland Sugo on 22/23 September.