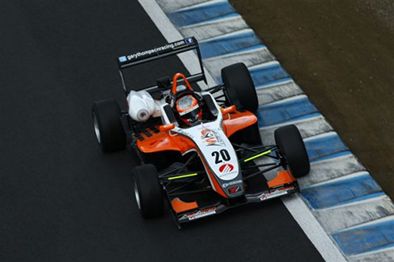 A dominant performance helped Gary Thompson become the first Irish driver to ever win a round of the Japanese Formula 3 Championship last weekend following his National Class victory at Motegi.

The up-and-coming single-seater ace from Dublin had earmarked rounds eight and nine at the revamped Japanese venue as key to re-igniting his title chances, and if race two on Sunday was anything to go by then he remains a threat for this year’s crown.

Excellent pace in mixed conditions throughout free practice helped the 19-year-old line-up second for Sunday’s 20-lap race. One of Thompson’s key attributes remains his starts and that was again in evidence when the Cebu Pacific Air, BAM Motorsports and Aviation Display-backed youngster immediately vaulted into the lead as the lights went out.

For a while he was content to look after his tyres as the chasing pack remained close behind. But with a couple of laps gone Thompson began to stretch his advantage, first setting the race’s fastest time before consistently lapping quicker than his rivals to open out a 9 second lead.

With breathing space established, Thompson was able to reel off the remaining laps unchallenged. Such was the poise of his SGC by KCMG-prepared Dallara-Toyota that he could maintain the near-10 second margin over second place without pushing overly hard en route to registering the first win for a non-manufacturer supported car in 2011.

With pace to spare, his rivals were fortunate that a communications issue had scuppered Thompson’s chances of laying down a marker on Saturday.

Having again qualified on the front row, Thompson was in confident mood ahead of the start, only for the lightest of rain to become monsoon-like as the field approached the grid. While most peeled off for wet weather tyres, a radio problem left Thompson stranded on slicks.

Having just about survived the opening lap he was able to pit for fresh rubber, although as the rest of the wet-shod runners were proving that was no guarantee of remaining on the track in such dangerous conditions. Inevitably the race was soon red-flagged.

When it re-started nearly two hours later Thompson was forced to begin from a lap down, but still set race-winning pace during his unlikely quest to reel in the National Class pack.

Gary Thompson: “It feels great to get that first win under my belt, and in such commanding style as well. The car worked really well here and it feels like we’ve turned a corner on set-up since Fuji. It was so easy to drive which gave me a lot of confidence, so a big thank you to all the guys at SGC by KCMG who have worked really hard.

“It’s just a shame that having had that pace we weren’t able to capitalise on what was a lottery in the early laps of race one. Perhaps the rain had affected the radio but I couldn’t tell what the team was saying. It’s a miracle that I got the car around at all before pitting. We had great pace in the wet though, which was a theme that continued on from Friday when I was fastest in the changeable conditions.

“I’m not going to think about the championship anymore. We had an up and down weekend and still clawed back five points so we’ll just see what happens over the remaining seven races.”

Thompson will travel with new-found confidence to Okayama on August 27/28 for rounds 10 and 11 lying fourth in the championship standings 23 points off the lead.