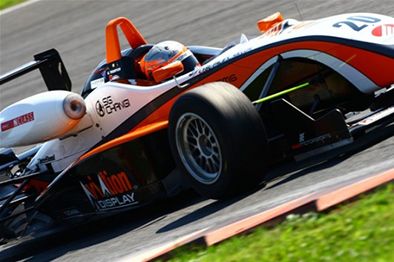 The Aviation Display and Cebu Pacific Air-backed driver enjoyed stellar qualifying pace, setting the second fastest lap of the first session to put himself amongst the favourites for pole.

However he was left wondering what might have been after suffering a crash on his second fast lap of qualifying two that would rule him out of the remainder of the session. The accident would also cost him a set of brand new tyres, which were damaged in the crash, a loss that would prove costly come Sunday.

Despite this setback Thompson rallied to pick up his fifth podium finish of the season in Saturday’s race one after a tremendous effort from his SGC by KCMG team saw the Dubliner’s car ready in time for the opening contest.

Starting second on a drying track, Thompson elected to begin the race on slick tyres. Though this would cost him places in the damp early stages it eventually paid dividends as he worked his way back up to third spot. He would narrowly miss out on snatching P2 at the final corner, setting the second fastest lap of the race along the way.

Sunday morning’s race two was to prove more challenging as Thompson was forced to start on the same tyres he had used throughout qualifying and the opening race. This put him at an immediate disadvantage, but a superb start saw the Irishman leap from fifth on the grid to fight for the lead into turn one.

A clash between two of his rivals forced Thompson to take avoiding action, leaving him fourth at the conclusion of the lap. He would remain there to the flag but continued to show impressive pace throughout the second run.

Thompson has little time to collect his thoughts before returning to action as the series travels to Japanese Grand Prix venue Suzuka for the penultimate double-header round of the campaign. The 19-year-old will be looking to add to his podium tally and, having impressed on his previous visit to the track, is very confident he will be in hunt for race victories.

Gary Thompson: “Overall I can’t be disappointed with the weekend as we’ve come away with a podium finish and shown some extremely competitive pace. That said it would have been great to make the most qualifying, as I believe we had a very good shot at pole.

“The team did a great job to get the car ready in time for the first race and to score another podium and only just miss out on the fastest lap was a satisfying result. Ultimately the second race was always going to be a challenge as our tyres were significantly more worn than our rivals’, so to come home fourth was an achievement.

“We’re back in action next weekend at Suzuka and I can’t wait. It’s probably the best circuit I’ve raced on and we had a very strong weekend when we raced there earlier in the season so I’m looking forward to it tremendously.”