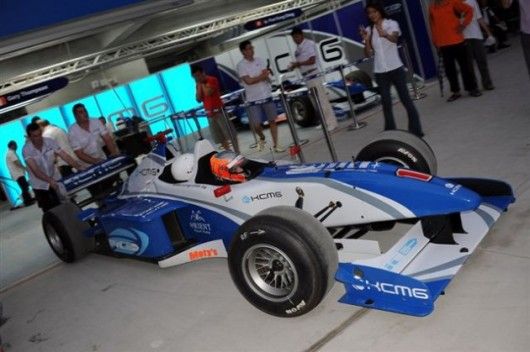 Dublin’s own Gary Thompson helped officially open Taiwan’s all-new Penbay International Circuit in spectacular style last weekend when he got behind the wheel of a two-seater Formula 1 car.

The 19-year-old Dubliner, who has spent this season contesting the Japanese Formula 3 Championship, became the youngest Irishman in history to drive a modern grand prix car, as well as the first from any nation to pilot one in Taiwan, after accepting an invitation to offer distinguished guests passenger rides at the 3.5km circuit’s opening.

It was also an opportunity for Thompson to catch up with team personnel from KCMG who, having overseen his 2011 single-seater campaign, were now sampling their first taste of running Formula 1 machinery. It was also a new experience for the thousands of fans in attendance, many of whom had never witnessed a grand prix car in the flesh before.

Of course this was just another day at the office for Thompson who, despite the wet conditions, enjoyed his time behind the wheel of the Minardi F1x2 which produces in excess of 700bhp thanks to its race-derived 3-litre Cosworth V10 engine.

Gary Thompson: “The car has a lot of power which can be difficult to exploit in the wet, but I know the circuit and KCMG CEOs enjoyed the wheelspin regardless! I’ve been racing in Asia for the past three seasons so to be the first person to drive a Formula 1 car in Taiwan is personally extremely rewarding. Penbay International Circuit is a great venue with a lot of potential in a part of the world that is really beginning to embrace motor sport. Everyone at the track did a fantastic job to get it up to standard in time for the event. You never know, I might be back here one day putting my local knowledge to good use!”