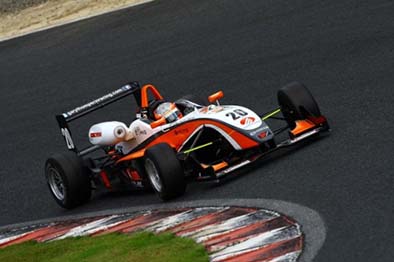 Gary Thompson is hoping to bring down the curtain on his Japanese Formula 3 season in style at Sportsland Sugo this weekend (September 24/25) as the championship plays host to its final three races of 2011.

The up-and-coming single-seater star, who confirmed his position as one of Ireland’s hottest prospects by being named Dunlop Motorsport Ireland Young Driver of the Month for August following his victory at Motegi, is looking forward to his return to Sugo, one of the most demanding circuits on the Japanese F3 calendar.

After a typhoon ended his chances of reeling in the National Class points lead at Suzuka at the beginning of September, Thompson’s focus has now switched to ending his season on a high note. And with the 2.323-miles of high speed sweeps that make up Sugo amongst his favourites of the year, there are few better places for the 19-year-old to do just that.

His performance there in 2010, when he secured an excellent podium finish after being fastest throughout race two, certainly suggests the Aviation Display and Cebu Pacific Air-backed Dubliner will be amongst the frontrunners for victory this weekend.

Gary Thompson: “Sugo is definitely one of my favourite and strongest circuits of the year. The end of the lap is just so fast with very little run-off, so quite old school in its construction really. In terms of out-and-out pace it was where I probably produced my best performance of 2010. I certainly had the speed to win the second race but as overtaking can be difficult due to the circuit’s fast nature I had to settle for the podium. It’s since been resurfaced following the earthquake earlier this year which I’ve heard has made the track bumpier.”

It’s unsurprising then that Thompson has identified qualifying as the significant session this weekend.

“Overall, throughout the year, our race pace has been excellent. As there are three races this weekend it would be nice to start on the offensive by really nailing a timed lap in qualifying so that we’re at least starting on the front row. With so little time between Sunday’s two races it will also be important to keep our noses clean, which is obviously helped by starting further up the grid. The championship isn’t going to re-schedule the washed out Suzuka round so I won’t be part of the title race this weekend. Even so, it would be great to end the year on a high and remind a few people of what I am capable of.”