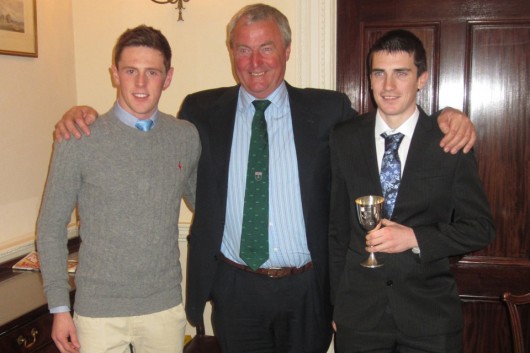 The Irish Racing Drivers Club were delighted to recognise the outstanding achievements of two of Ireland’s most accomplished drivers at their annual awards luncheon at the Royal Automobile Club attended by luminaries such as rally legends, Paddy Hopkirk and Rosemary Smith.

Craig Breen, the winner of the 2012 Super 2000 category of The World Rally Championship was delighted to receive the Club’s premier award, “Driver of the year”, from Club Chairman, Alec Poole. Accepting the award Craig said,
“It is a real honour to receive this prestigious award, it was a tough season and to be recognised by the IRDC is very special”

Club Chairman, Alec Poole replied,
“The IRDC was formed to recognise and support Irish racers and celebrate their achievements. Craig had an exceptional season culminating with the Super 2000 championship crown. We are delighted that Craig could join us to receive this prize”

GP3 driver, Will Buller, received a special commendation for his outstanding win in GP3 at Silverstone in the rain at the British GP meeting from former GP winner and ex-McLaren driver, John Watson.

Buller said,
“It was a challenging race in really difficult conditions and ranks as one of my greatest wins”.

You can find out more about and follow the progress of Craig and Will on their websites; www.craigbreen.com and www.williambuller.com