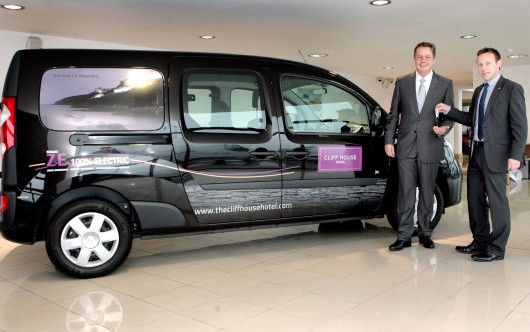 The 5-star Cliff House Hotel in Ardmore, Co. Waterford has taken delivery of a new Renault Kangoo Z.E. five-seat commercial vehicle. The luxurious hotel endorses a strong environmental policy and will use the new Kangoo Z.E. as a courtesy vehicle for guests. The Renault Kangoo Z.E. is one of Renault’s range of 100 per cent electric vehicles which includes, the Fluence ZE saloon, the Twizy and the ZOE. Commenting on the delivery Adriaan Bartels, General Manager of The Cliff House Hotel said, “We have a very strong environmental policy at the Cliff House Hotel. When it came to choosing a new vehicle for the hotel, we were keen to find one that reflects our green ethos. For us the Renault Kangoo Z.E. ticked all the boxes. The staff at Renault H & H Motors were extremely helpful and guided us through the decision-making process with ease. The hotel staff are already queuing up to test drive it!”