Home Motorsport News Spectacular One Two for the Yamaha WSB Team at the Season Finale... 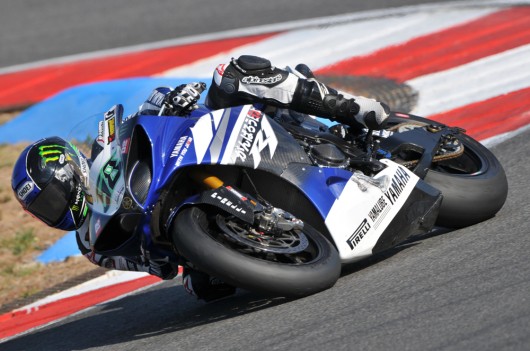 Yamaha World Superbike riders completed yet another spectacular race day today in Portimao, the final two races of the 2011 WSB season, with an outstanding one two finish on the Portuguese podium. Both Melandri and Laverty completed their WSB rookie seasons in style, closing the championship with Marco Melandri in second place in the 2011 WSB Championship standings and Eugene Laverty in fourth, the latter tying on points with 2010 Champion – Max Biaggi who takes the third place.

The Yamaha World Superbike Team proved to be the top team in the standings by completing the second race of the day with a spectacular one two race finish. Skillful race craft and determination was on display throughout the 22 laps. Laverty claimed the lead on lap one, following a perfect start off the front row on the grid, while Melandri tucked in behind him in second place by lap three. Holding off advances from Rea and Checa, Melandri closely tailed him team-mate to eventually take the lead with just four laps to go and snatch the chequered flag, claiming his fourth victory of the year. His Northern Irish team-mate and fellow rookie crossed the line just one second behind, to take the second step on the last podium of the season.

Both Yamaha riders faced a difficult race one after getting off to a perfect start from the grid. After just two laps Eugene Laverty had an issue with the rear of the machine, skillfully managed to avoid crashing but was forced to come in and have the steering damper repaired. The determined Northern Irish rider went back out, with a two lap gap and impressively made up four places setting fast lap times to complete the race in 19th position but missed out on important points for third place in the championship. Team-mate Marco Melandri struggled with rear tyre issues but pushed hard to cross the line in sixth place.

In this stellar season the Yamaha World Superbike team has claimed an amazing 19 podiums of which six race victories with two WSB rookie riders, Yamaha taking the second place in the 2011 World Superbike Manufacturer’s standings with a total of 450 points and the top team in the Team standings.

Earlier this season, Yamaha Motor Europe took the difficult decision to withdraw the official Yamaha World Superbike Team from the FIM Superbike World Championship at the end of the 2011 season, so today’s race day in Portimao sadly marked the final race for the Yamaha WSB team.

Eugene Laverty
“Well it was a great end to the season for Yamaha with a one two race finish in race two. It’s been a fantastic year and I’d like to thank Yamaha and all the team for that. Obviously it would have been great to finish up with one more point to get third in the championship, but unfortunately I lost out on a lot of points in race one. I had an issue with the bike on lap three, coming into the VIP tower corner when the rear of the machine came off the ground and the bike suddenly snapped sideways. I was lucky not have crashed and managed to stay on the bike but the viciousness of the incident broke the steering damper and I had to come back in and have it changed. It’s a pity as the pace was quick and I could have definitely been on the podium.”

Andrea Dosoli – Yamaha World Superbike Team Manager
“Fantastic! A great finish to an amazing season. Marco and Eugene were really spectacular. In the second race they showed fantastic racing, proving to be very talented and determined riders with great respect for each other. It’s a pity Eugene lost out on important points in the first race and Marco had a problem with the rear tyre and they couldn’t fight for the podium.

I’d like to thank the riders, the team and all our partners for the professionalism, passion and motivation evident throughout the 13 races of the season. Second place in the Manufacturer’s championship is an excellent result for Yamaha, considering that both riders are rookies and were battling with Checa, a Champion that deserves his title, flawless all year and making the most of the advantage that the twin cylinder machines are provided by the championship. We are proud that our R1 is the first four cylinder in the standings. Thanks to everyone.”