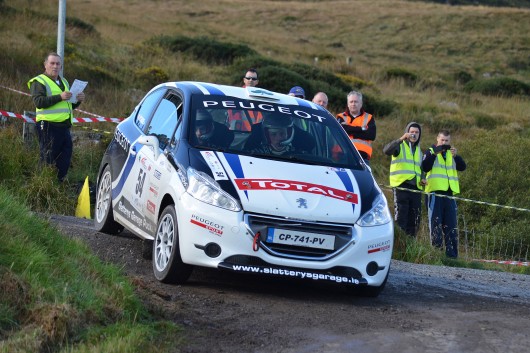 Tipperary man Andrew Slattery and his co-driver Shaun Forde had a successful weekend at the Cork 20 International Rally last weekend. The pair finished 2nd in class and 13th overall, driving their Peugeot 208 R2. Commenting on the rally Andrew said, “It’s a great feeling to be finished and to have the car going home in one piece. It was no doubt the toughest event I have ever competed in. Conditions were very changeable, very wet and tricky. We had a massive scare on stage 1 which could have ended the weekend for us: 5th gear down a mountain lane and the rear of the car lost grip! It was also somewhat of a gamble choosing a completely new set up with different suspension settings and a softer spring front and rear, but it definitely paid off and the car felt great even on bumpy surfaces.” He continued, “The surface changed a lot from medium grip to no grip at all in places, which didn’t give me the confidence to push as hard as I could at times. We ended up 2nd R2 overnight with a 53 second gap. But we’re very happy overall with the weekend’s result. The car ran without a single fault all weekend over 16 stages and over 200 competitive kilometres.” Andrew’s next rally will be the Fastnet West Cork Rally on the 30th October.