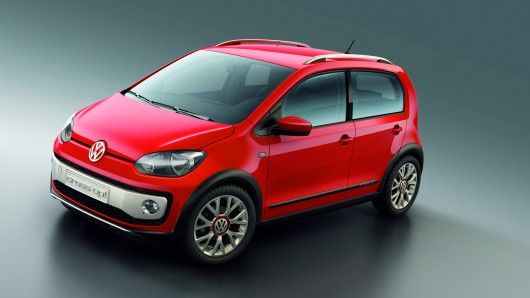 Visitors to this month’s Frankfurt Motor Show got the biggest clue yet as to the look of the production five-door up!, in the shape of the cross up!, one of six small car family concepts that were displayed alongside the three-door city car model.

The cross up! previews the five-door up! but with the styling cues of an SUV, including suspension raised by 15 mm all round.  The most obvious differences when compared with the standard up! are of course the additional doors and the styling of the C-pillars.  While on the three-door car the shoulder line and windows ascend towards the rear near the C-pillars, on the five-door the two elements form a straight line, creating a more upright appearance.

Many of the styling elements on the cross up! (such as the wheel arch and side sill extensions and the black side protection strips above the sills) will be familiar to those who recall the last-generation Polo Dune, sold in mainland Europe as the Cross Polo.  These styling cues give the vehicle a more rugged look, as can be seen in the eye-catching front bumper with silver cross-bar and integrated fog lights.  The front air intake is also modified, with a honeycomb grille that is distinctly larger, especially towards the bottom. 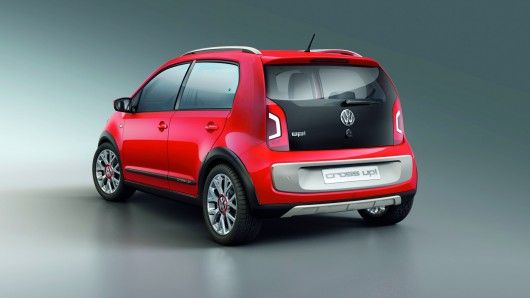 Underneath, there is robust silver-coloured underbody protection at both ends.  Like the front bumper, the rear bumper also gets a silver cross-bar.  That colour is echoed in the matt silver roof rails and the light silver door mirror caps, all offset by the eye-catching Tornado Red paint of the body, which can also be found surrounding the Volkswagen logo in the centre of the 16-inch alloy wheels.

On the cross up! study, the red theme continues inside the spacious interior where the seats have red centre panels, offset by grey side panels.  The dashboard panel and upper door trim panels are also body-coloured.  Other accents, such as the bezels of the air nozzles and the centre console, are designed in black piano paint, while the leather-wrapped steering wheel, gearlever and handbrake all have decorative coloured seams.