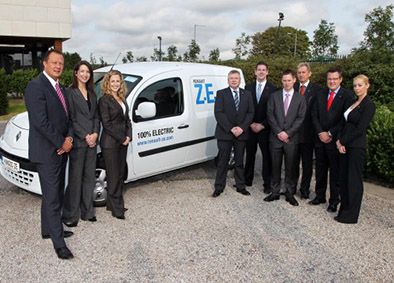 These ambassadors will be dedicated to the Renault range of electric vehicles and will help to build awareness and assist customers in making informed choices.  Also as part of their responsibilities, the EV Ambassadors will manage internal training, marketing, leads development and network development amongst others. In addition to local training, further electric vehicle training will take place in October in Seville preparing the Renault dealer network for the launch.

While the EV Ambassadors will be experts in their field, the entire Renault network will be fully trained to sell electric vehicles. Based in key dealerships around the country, these ambassadors will play a crucial part in the launch of Renault electric range of vehicles, which will see the Kangoo ZE arriving in November, followed by Fluence ZE in early 2012.  Also in 2012 Renault will launch the Twizy, an urban two-seater quadricycle and the ZOE, a stylish compact hatch.

“Interest in the roles was very high and a huge number of applications were received” said Sandra Rea, Electric Vehicle Project Manager at Renault Ireland. These new recruits will be responsible for a number of tasks in the electric vehicle area.  We were looking for applicants with a wide range of abilities and I feel we have found the right people”.

Renault is the only manufacturer to introduce a range of electric vehicles from light commercial vans to passenger cars, and aims to be the leader in the field of Electric vehicles.

The Renault Electric Vehicle Ambassadors are: