Home Motorsport News O’Brien and Doyle take it down to the wire! 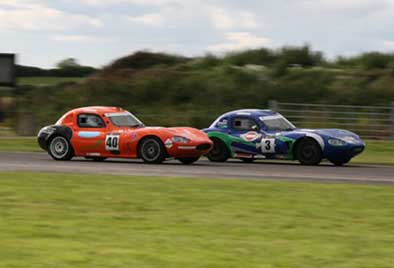 Rounds ten and eleven of Ginetta Junior Ireland returned to Kirkistown Racing Circuit in Northern Ireland. At the front of the Championship only a handful of points split the leading trio of Andy O’Brien, Sean Doyle and Jake Byrne heading into the weekend, so it was very much all to play for as each driver was hoping they could go into the final weekend with a comfortable advantage.

Qualifying was a very close affair with positions changing on every lap. In the end Andy O’Brien grabbed pole from Andrew Watson who changed teams ahead of the weekend and is now racing for Douglas Motorsport. Sean Doyle put himself third on the grid with ABR team mate Jake Byrne fourth and James Fleming in fifth.

Race one was highly entertaining right from the beginning. Andy O’Brien got the best start to lead into the first corner followed by Sean Doyle and James Fleming. Andrew Watson struggled off the line leaving him with a lot of work to get back with the leaders. As the race progressed there were some fantastic battles emerging right through the field. Sean Doyle was right on Andy O’Brien’s back bumper waiting for any mistake from the recent nominee as Young Racing Driver of the Month for July. James Fleming was having his best race so far this season and racing very well to stay ahead of Jake Byrne and a recovering Andrew Watson. ASK Racing’s Megan Kessie and ABR’s Sophie Byrne were racing very well with barely a coat of paint separating the pair. Despite being in battle they were closing in on Andrew Clarke in his Murray Motorsport car. Back at the head of the field it was Andy O’Brien who had now managed to open a small margin to take a superb victory ahead of championship rival Sean Doyle. Andrew Watson came home in third with a great recovery drive and a superb race long battle with Jake Byrne and James Fleming who took the chequered flag in fourth and fifth respectively. Andrew Clarke crossed the line in sixth followed by Megan Kessie who got the upper hand on Sophie Byrne. Eorann O’Neill was a new comer to the championship and she rounded out the top nine with a solid drive.

Race two grid positions were decided by the driver’s fastest lap from race one and it was Sean Doyle who was on pole with his record breaking lap in the opening race. Andy O’Brien lined up in second followed by James Fleming with his career best grid position in third. Andrew Watson started from fourth with Jake Byrne and Andrew Clarke rounding out the top six respectively. Once again it was O’Brien who set the track a light to lead into the first corner followed by Sean Doyle. Behind them Andrew Watson spun off on the run down to the first corner but was able to rejoin, albeit at the back of the field. As in race one, the battle at the head of the field was immensely close as Doyle was breathing down O’Brien’s neck, waiting at any moment to seize an opportunity to take the lead. James Fleming and Jake Byrne were having a fine race with Fleming having one of the best weekends of his career to date. Megan Kessie and Sophie Byrne were once again driving a superb race until a slight mistake from the latter allowed Kessie to open a small gap and begin chasing down Andrew Clarke. Back at the front of the field Sean Doyle managed to find a way past O’Brien as the pair ran side by side to Colonial. Jake Byrne was now closing in on the pair and also managed to find a way past O’Brien to move into second. However O’Brien couldn’t afford to stay in third to keep his hold on the championship and managed to pass Byrne to reclaim second. Out in front though it was a superb victory for Sean Doyle who had been driving exceptionally well over the weekend. Andy O’Brien crossed the line second with Jake Byrne in third. James Fleming came home in fourth after a very impressive performance all weekend. Andrew Watson recovered from his opening lap excursion to finish fifth with Andrew Clarke rounding out the top six.